What is the psychology behind blind spots? Why do we fail to see, what others see so clearly about us?

Itâ€™s absolutely imperative to identify our blind spots. I believe that they are impediment for one to reach his full potential. But how does one, see his blind spot - #oxymoron? What is the psychology behind it?

What you are talking about is something psychologists Joseph Luft (1916â€“2014) and Harrington Ingham (1916â€“1995) looked at in 1955. They developed a 4-pane window visualisation called the Johari Window (named by combining the first parts of their first names). 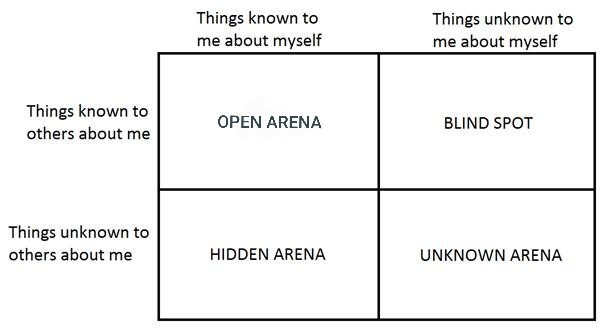 The model is also denoted as feedback/disclosure model of self-awareness (Luft, J., & Ingham, 1961). Each window pane is an arena within which holds information about you. This is used primarily in self-help groups and corporate settings as a heuristic exercise, however, it is increasingly being used elsewhere such as in clinical supervision as a useful tool to develop self awareness and reflection (Halpern, 2009; Beach, 1982).

In order for you to know what is in each arena, you MUST be:

As more knowledge about you is gathered, the relevant arena gets filled with that knowledge. Let's say your co-workers see you as someone who doesn't want to talk to them, yet you see yourself as approachable. The fact that you are seen that way will be in your blind spot.

Know what is in your blind spot

In order to know what is in your blind spot (as with other arenas), you need to seek for it through communication with your co-workers. You could ask them for their views on you, allowing them to be open and honest.

What is in your hidden arena

This can have a benefit to you.

As people know more, they understand you more. What is seen as you being standoffish may not be quite how they see it. Maybe you are quiet because you just lost a close friend or relative. They may see it differently once they know.

How do I find out what is totally unknown (Unknown Arena)

Well that is the trickier one. You don't know what is there and neither does anyone else. The only way you are going to know is by reflection on what you know in the other arenas. Clinical supervision is one place where your thoughts and feelings about the work you have done can help with this. Maybe you have hidden prejudices you were not aware of. There may have been hints of it in your blind spot or hidden arena. Listening to what others have said is in your blindspot along with your thoughts and feelings will bring them out into your awareness.

What is said in the Wikipedia article @Fizz linked in the comments seems to say, in a roundabout way, the same as what I said in my answer. Just in a different way. You need to holistically look at your environment and examine it in order to find your blind spots.

Not the answer you're looking for? Browse other questions tagged social-psychology bias consciousness metacognition or ask your own question.

11
How do clinicians control for their own mental disorders?
7
Why do therapists need therapy?
0
Phrase used by jordan peterson about "revealing"

9
Is it possible for humans to conceive of being dead?
71
What makes people easily subscribe to pseudoscientific theories?
22
Is there a causal connection between repressive sexual morality and antisocial behavior?
8
What is the psychology behind the need to be the centre of attention?
5
What is the primary mechanism behind nationalism, sports-team-ism, product-ism etc.?
2
What is the psychology behind the mass crying of the crowds at superstar music concerts?
9
What is the motivation model behind StackExchange?
3
What is the scientific term for the expectation, that a personal experience positively deviates from what first- or second-hand experience suggests?