What are the neurological similarities between humans and primates?

I don't know exactly what primate specie is considered to be out ancestor. But the next question regards them.

Assuming that in the beginning *we considered true the remnants of many trial & error tests, the question is straightforward:

Do we have some specific neural processes similar to primates - for example those involving:

Can we go even deeper in the animal's kingdom and find those similarities? How deep?

Any research study (paper) or essay is welcomed. I don't pretend a complete answer but some guidelines.

Primate brains are considered to be highly similar to ours. In terms of their structure, it's more appropriate to look for the differences than the similarities.

However, you're asking for cognitive skills and these are mediated by cortical structures, and especially the higher association areas. This is exactly where the similarities are starting to break down, as the cortex, and hence higher order processing has rapidly expanded in human evolution. Notably, the surface area of the cortex has greatly expanded in humanoids through a progressive increase in the number of gyri and sulci ('wrinkles') in the cortical surface. A greater cortical surface correlates with higher cognitive abilities in humans (Fig. 1). This is what sets us apart. Cognition being

[T]he ability to interpret and connect information that is perceived in the world and to then apply this personal knowledge adaptively to future situations and problems. 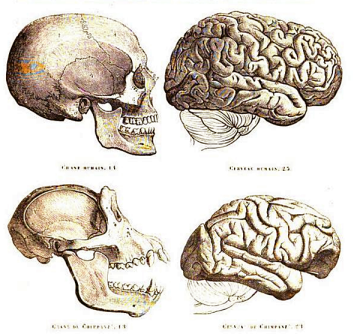