What are the neurological and psychological bases for chromophobia

According to this amusing, yet informative Cracked article, Phobia-source article and Chromophobia: do you have a fear of colours website, chromophoba is a fear of bright colours. This condition is also known as chromatophobia

There are no Wikipedia references for the alternate name and checking Wikipedia for chromophobia only reveals a movie by the same name, which is in a small part, why I am asking.

What are the neurological and psychological bases for this phobia?

Chromophobia has at least two distinct meanings in the sciences:

I was unable to locate any reliable source on a psychological fear of colors. I searched the most relevant digital databases: Web of Science, Academic Search Premier, PsychINFO, and Psyndex (the latter listing publications in German). And I went through all the handbooks on mental disorders that we have at our university library and the institute of psychology. There is not even anecdotal evidence. Chromophobia as a mental disorder appears only in lists of phobias on the internet that have been created by laypeople.

Or in a list of 273 phobias compiled by Jack D. Maser as an appendix to the handbook on Anxiety and Anxiety Disorders (Tuma & Maser, 1985): 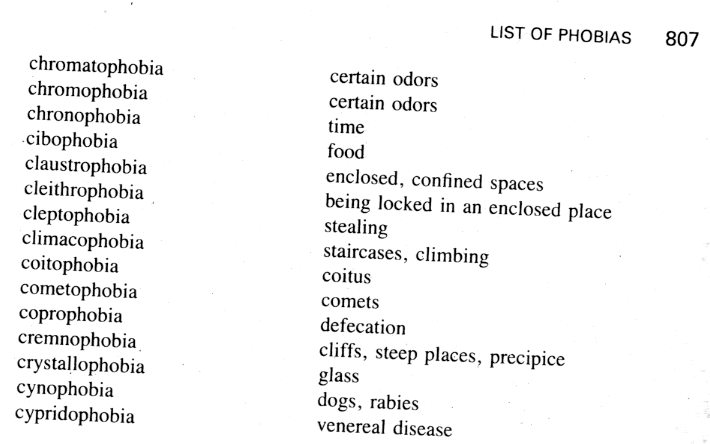 But as you can see from this top part of page 807 of his list, his Latin is not the best. Probably he couldn't decipher his own (or someone else's) handwriting, mistaking "col" for "od". But the basic problem with this list, which might well be the grandmother of all the lists of phobias found on the internet today, is that Maser does not provide any sources for his phobias. And if you look at the fears of time, food, or defecation, listed in it, it seems quite unlikely that anyone might actually be able to suffer from these.

Eminent expert Richard J. McNally, a member of the specific phobia and posttraumatic stress disorder committees of the DSM-IV task force, thinks (1997, p. 183) that in Maser's list "terminological proliferation has been driven more by etymology than by etiology. ... In fact, suffer[er]s of hellenologophobia (i.e. fear of 'pseudoscientific terms') will surely tremble to contemplate many of [the] entities uncovered by Maser in his search through the literature."

In the DSM, phobias, or "specific phobias" as they are classified (to distinguish them from social phobias and other anxiety disorders) are subclassified by their trigger:

The category that would interest us here, is the "other" category. The standard examples given in the manual and expansively discussed in McNally's article on "Atypical Phobias" (McNally, 1997), are: "phobic avoidance of situations that may lead to choking, vomiting, or contracting an illness; in children, avoidance of loud sounds like balloons popping or costumed characters like clowns".

I'm not a specialist on phobias, but from my perusal of quite a volume of literature today, I have the impression that in adult phobias all triggers are either potentially harmful, or are related to similar objects that are harmful: all animals are either predators or poisonous or look like them (a cat might be essentially harmless to an adult human, but it is an animal that can cause pain; there is no lamb phobia); all "situations" involve technical appliances that might fail (airplanes, elevators) or harm you by their characteristics (getting stuck in a narrow tube); all environments can cause death (drowning, falling from a height, getting struck by lightning). Phobias are essentially reasonable in their choice of a trigger, they never choose triggers that are always and totally harmless. From this (non-specialist) result of my search, a fear of color appears impossible.

Of course this is only my personal, non-specialist impression, after a short research, and it will be falsified as soon as someone can come up with a reliable source.

But I admit that I was not truthful in my summary, and have lied to you when I wrote that I found no reference to chromophobia as a psychological disorder. PsycINFO turned up one result, an article published in Italian in a journal that unfortunately is not available online:

An English abstract is given:

Stemming from an analysis of a case study this research proposes to study a symptomatology where the sight of colour provokes anguish, known in literature as chromophobia, in order to allow us to develop the correct nosography and to identify the underlying psychic dynamics. The immediacy with which an unaltered perception in itself can be given an abnormal meaning to the point of becoming a terrible anguish brings us to consider chromophobia as an example of delusional perception and as such falling within the psychotic syndromes. As far as the object perceived is concerned, that is colour, it is worth noting that Western thought views it as negative for a twofold reason. Religious dogma views colour as dangerous given that it is alien to man, belonging to the body of another who is different from oneself and as such it has been given female, infantile, primitive or pathological attributes. Rationalist thought has, on the other hand, underestimated the importance of colour viewing it as superficial, supplementary and not warranting serious study. Colour has always been subordinate to the drawn figure. Both these approaches have proposed a dichotomy between line and colour attributing the former to the world of rationality and the latter to the non-conscious world. This splitting, according to the authors, can be overcome only if we consider that in the theory of birth the ego is not split at its origin and as such neither is perception. Line and colour therefore are connected to birth and the first year of life.

I admit, that I don't consider this source reliable. The journal, Il sogno della farfalla, as described in a Wikipedia article, is focussed on the psychotherapeutic theory and practice of its founder, the famous but controversial Italian psychiatrist, screenwriter and movie director Massimo Fagioli. This is not the place to discuss Fagioli or the authors of the article (who are both members of the journal's editorial board), but we should note that the journal appears not to have a peer review process.

With this last edit my research is now complete.