Over in Health.SE, @faustus provided a couple of references to papers which suggest the use of Botulinum toxin A (BTA) - otherwise known as botox - to treat depression — Magid, et al. (2015a) and Finzi & Rosenthal, (2016) 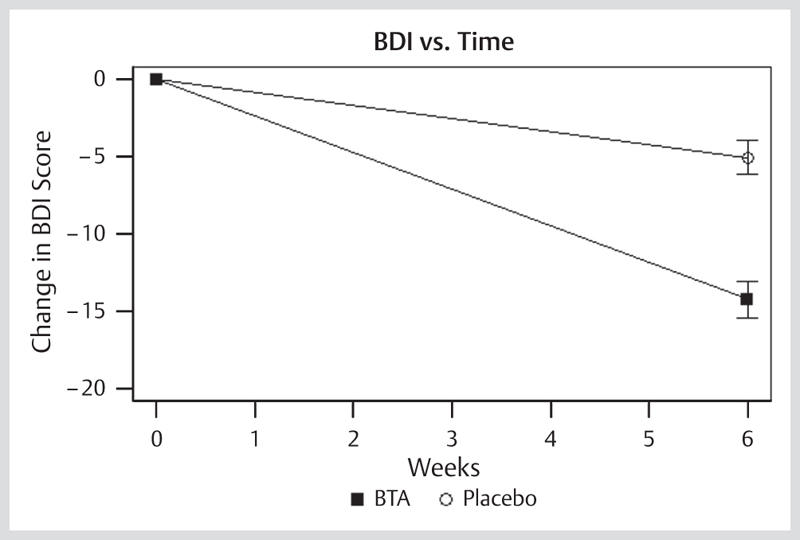 Figure: Improvement in BDI score. The figure shows absolute reduction in the BDI scores (14.3 vs. 5.1±standard error of the mean) from the baseline to the primary end point 6 weeks thereafter in the combined sample (n=134) for the BTA (n=59) and the placebo group (n=75), respectively.

In an initial case series, one of us (EF) injected BT into the frown of ten depressed patients, eight of whom went into remission after one treatment (Finzi and Wasserman, 2006; Finzi, 2013). The study was limited by its small size, lack of controls, and lack of blinding. In three subsequent randomized, double blind and placebo controlled trials, we and other researchers have found response rates of 50—60% in major depression, with about one third of patients going into remission (Wollmer et al. 2012; Finzi and Rosenthal, 2014; Magid et al. 2014, 2015b). BT showed antidepressant effects both when used as an ancillary treatment and by itself.

However, they then go on to say

How might injecting BT into the corrugator muscle influence the emotional brain? FMRI imaging has shown that subjects who received BT injections into their frown muscles had amygdala that were less responsive to negative stimuli (Hennenlotter et al. 2009). Recent work has confirmed that amygdala activity in response to angry faces was decreased when the frown muscles were paralyzed by BT injection. Furthermore, amygdala activity returned to its original inducible state after the effects of the BT injection had worn off, confirming that BT reversibly severed afferent feedback from the corrugator muscle to the amygdala (Kim et al. 2014).

With the decrease in amygdala activity in response to angry faces, am I correct in thinking that this could have a detrimental effect with regard to the flight/flight response in potentially dangerous situations?

With the decrease in amygdala activity in response to angry faces, am I correct in thinking that this could have a detrimental effect with regard to the flight/flight response in potentially dangerous situations?

Yes, but like everything in neuroscience, it's probably more complicated that that. Working back from first principles, the same could be said of other antidepressant treatments:

Background The amygdala is believed to play a key role in processing emotionally salient, threat-relevant, events that require further online processing by cortical regions. Emotional disorders such as depression and anxiety have been associated with hyperactivity of the amygdala, but it is unknown whether antidepressant treatment directly affects amygdala responses to emotionally significant information.

Results Volunteers receiving citalopram showed decreased amygdala responses to masked presentations of threat compared with those receiving placebo. Citalopram also reduced responses within the hippocampus and medial prefrontal cortex (mPFC) specifically during the fear-relevant stimuli. These neural differences were accompanied by decreased recognition of fearful facial expressions assessed after the scan. By contrast, there was no effect of citalopram on the neural or behavioral response to the happy facial expressions.

Conclusions These results suggest a direct effect of serotonin potentiation on amygdala response to threat-relevant stimuli in humans. Such effects may be important in the therapeutic actions of antidepressants in depression and anxiety.

Maybe perceiving the world as less threatening is precisely what depressed people need in their lives. However, there may be something more interesting at play with respect to botox. In the papers you cite, these all have to do with interpretation of facial expressions. For example, in Hennenlotter et al. 2009:

If the mechanism of action of botox involves facial proprioception and there's a reduced amygdalar response to angry or fearful facial expressions, I would speculate that this involves mirror neurons in some manner.

Without the administration of botox, an interesting experiment would be examine the threat perception of facial expressions in people with a forced grin. We would also predict that threat perception is still present when other threatening stimuli are used e.g. handgun. I'm sure it's been done by someone.

Not the answer you're looking for? Browse other questions tagged cognitive-neuroscience clinical-psychology depression anxiety pharmacopsychiatry or ask your own question.

5
Neuroplasticity and Treatment of Depression
4
Why do hallucinations appear in depression?
4
What effect can depression have on memory?
7
Why could too much BDNF be detrimental in terms of depression and memory?
1
Relation of serotonin level and mood/depression
4
Can calmness happen during the fight-flight response?
1
Ritalin for treating attention and lack of focus in depression
1
Post alcoholic depression and mental health
0
why we failed to convince our own mind by reasoning and rational arguments over mental illness like depression, anxiety, phobia?
2
Causality regarding neurotransmitter imbalance and depression