Relation of serotonin level and mood/depression

Not a biologist. Not even related to science, however I read a lot of popular psychology stuff, plus read some info about antidepressants and a question tortures me :)

So the question is: is there any explanation of this, and what I (as a non-scientist) am wondering more about is that why then we feel better after consuming such things as chocolate, sugar etc, which indirectly might increase serotonin level?

Plus, why we cannot consume large amounts of L-tryptophan for example? If I overdose tryptophan nothing scary happens, while if I overdose prozak or zoloft, I can end up with coma probably.

There are a lot of pop psychology articles talking about hormones, however I suspect that trying to change the level of hormones by some actions (which are advised by the articles, I don't know, starting from eating sweeties and ending with doing sports) won't change it much. I know that there should be some "normal" values of serotonin in blood (ng/mL). But I don't believe that if I go to sauna and eat snickers it will increase this level drastically :) Nevertheless I'll feel better. While if I take antidepressants and they will indeed increase the level, I won't feel happy right away. Why so?

There are some studies which suggest effect after the first week. E.g. Early Onset of Selective Serotonin Reuptake Inhibitor Antidepressant Action: Systematic Review and Meta-analysis (2006):

Pooled estimates of treatment effect on depressive symptom rating scales were calculated for weeks 1 through 6 of treatment. In the primary analysis, the pattern of response seen was tested against alternative models of onset of response. The primary analysis incorporated data from 28 randomized controlled trials (n=5872). A model of early treatment response best fit the experimental data. Treatment with SSRIs rather than placebo was associated with clinical improvement by the end of the first week of use. A secondary analysis indicated an increased chance of achieving a 50% reduction in Hamilton Depression Rating Scale scores by 1 week (relative risk, 1.64; 95% confidence interval, 1.2-2.25) with SSRI treatment compared with placebo. 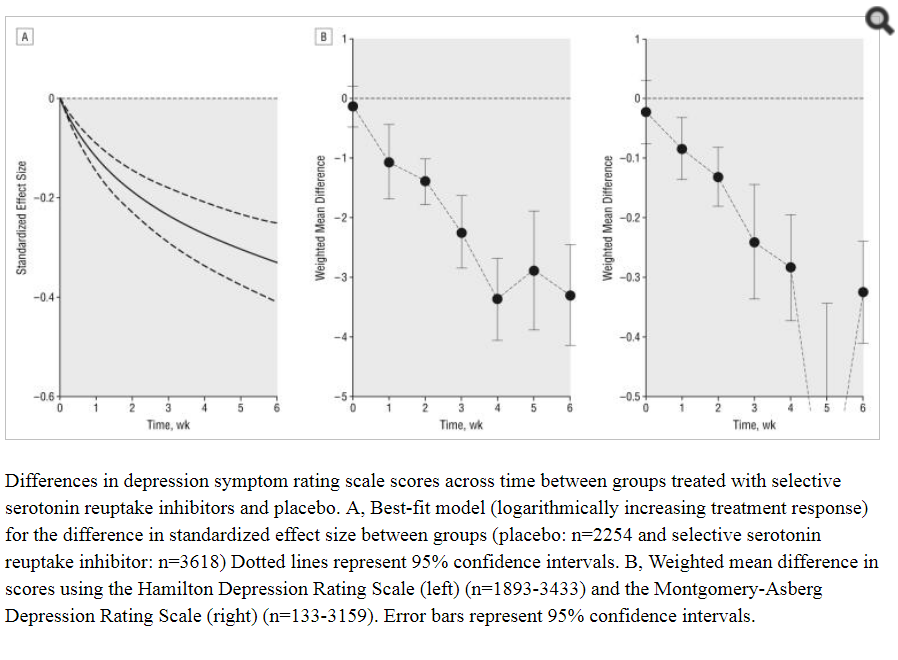 Also a very similar study a year before: "Is there a delay in the antidepressant effect? A meta-analysis." (2005):

The time course of improvement on active medication and placebo was nearly identical, as 60.2% and 61.6% of the improvement that occurred on active medication and placebo, respectively, took place during the first 2 weeks of treatment. Drug-placebo differences were not only present but were most pronounced during the first 2 weeks of treatment and diminished in a stepwise fashion thereafter. A series of subanalyses confirmed that this early drug-placebo separation was clinically observable and represented a true drug effect.

I think there are some practical difficulties with collecting data more than weekly in large trials. Also, a small increase is not likely to be noticed in everyday clinical practice (non-trial).

SSRI effectiveness has been mired in some controversy though, with a lot of the trials being (obviously) sponsored to some extent by drug companies.

And eating sweets will increase your serotonin, as will smoking (nicotine) for instance. The problem with using these as anti-depressants is how much you'd have to consume and for how long to get the same effect as from a SSRI. Quoting "Brain serotonin, carbohydrate-craving, obesity and depression":

Serotonin-releasing brain neurons are unique in that the amount of neurotransmitter they release is normally controlled by food intake: Carbohydrate consumption--acting via insulin secretion and the "plasma tryptophan ratio"--increases serotonin release; protein intake lacks this effect. This ability of neurons to couple neuronal signaling properties to food consumption is a link in the feedback mechanism that normally keeps carbohydrate and protein intakes more or less constant. However, serotonin release is also involved in such functions as sleep onset, pain sensitivity, blood pressure regulation, and control of the mood. Hence many patients learn to overeat carbohydrates (particularly snack foods, like potato chips or pastries, which are rich in carbohydrates and fats) to make themselves feel better. This tendency to use certain foods as though they were drugs is a frequent cause of weight gain, and can also be seen in patients who become fat when exposed to stress, or in women with premenstrual syndrome, or in patients with "winter depression," or in people who are attempting to give up smoking. (Nicotine, like dietary carbohydrates, increases brain serotonin secretion; nicotine withdrawal has the opposite effect.)

WebMD has fairly accessible article on the latter, which says among other things:

Researchers at Rush University Medical Center in Chicago found that carb cravers who have a mildly depressed mood seem to be self-medicating. They studied women who were overweight and had a history of carb cravings. They gave them a choice between a protein-rich beverage or a carb-rich one. They found that when the women reported being in the worst moods, they picked the carb beverage more often than the protein one. In addition, the carb drink improved their mood better.

Not the answer you're looking for? Browse other questions tagged depression serotonin or ask your own question.

18
Is serotonin conclusively linked to depression?
11
How do SSRIs work?
1
Is there any empirical support to “chemical imbalance theory” for mental illness?

18
Is serotonin conclusively linked to depression?
10
Are there any ways to increase dopamine and serotonin levels when working or learning something complex?
3
Epigenetics and serotonin (amygdala threat response)?
4
are serotonin levels higher or lower in dominant vs. non-dominant primates and humans?
2
Do psychiatrists and researchers themselves don't have an idea how antidepressants work?
1
Post alcoholic depression and mental health
2
Causality regarding neurotransmitter imbalance and depression