I want to know if in an experiment participants will learn the object as a whole or feature by feature.

Let's say, my objects are geometric shapes, and its features are color and orientation.

Would it be a good idea if I do something like:

Does this experiment measure what I want to measure?

Can you suggest some keywords for the above situation? Binding problem is somehow related but it is not exactly what I am seeking for.

Your experiment is most similar to those in categorization research. For example, Wills et al (2013)* argued that single-dimension classification (one-feature analysis) is less effortful, than multidimensional with more than one dimension, and omni-dimensional, where you process and categorize the stimuli as a whole. They used the match-to-standard procedure, where each stimuli is classified by participants as members of categories. This task was first used by Regehr and Brooks (1995) and basically means that you map each the stimuli features and each stimuli feature that you categorize.

For example, you have Stimulus A (dark, square), Stimulus B (light, triangle) and Stimulus C (dark, triangle). The dimensions are shape and colour.

Of course you have to have to set up rules for stimuli structures in category learning or learning in general and fit the stimuli into those structures.

If you instruct them to pay attention to the first dimension only, you would pay attention only to the first dimension in the data analysis. But that would be supervised learning, and that would defeat the purpose of your experiment. If you are curious to whether they learn by single-dimensions or through omni-dimension, you must not supervise the learningand should not provide feedback, because feedback will likely become superior to simple observational learning (see Wills, Milton & Edmunds, 2015).

A very good example is Nosofsky et al. (1994) replicating Shepard et al. (1961). That one is the closest to what you described you want to do. You can find the data and look at the categorisational structure in catlearn (Wills et al., 2016), so you can see how they handled their stimuli dimensions and data.

Hope this helps. I might have not been too coherent, but I think the gist is there.

Wills, A. J., Milton, F., & Edmunds, C. E. R. (2015). Feedback can be superior to observational training for both rule-based and information-integration category structures. Retrieved from https://pearl.plymouth.ac.uk/handle/10026.1/3064

* You can visit the authors' website to get the data and how the analysed that data.

In your experiment you are directing participants attention to a sepcific feature, in order to accomplish a difficult task. This experiemnt in my humble opinion does not test your hypothesis, probably it will replicate the findings of the invisible gorilla experiment. Particiapnts will not pay attention to any other irrelevant features.

An experiment that I find related to your hypothesis is the Schyns and Rodet's (1997) feature creation experiment. The extracts below are from this article 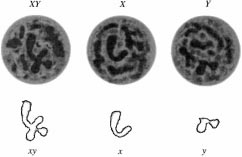 Design of Schyns and Rodetâ€™s (1997) feature creation experiment. From left to right, the top pictures are Martian cell exemplars from the XY, X, and Y categories. From left to right, the bottom pictures are the features xy, x, and y, defining the categories. Note that the feature xy is a combination of feature x and feature y. Subjects in the XY-->X-->Y (vs. X-->Y-->Y) group learned the category in this order.

The reasoning was that subjects should categorize X-Y cells as XY members if they perceived and represented XY as a conjunction of two individuated features. Results revealed that only one group (X-->Y-->XY) performed this categorization; the perception of XY in the other group prompted X or Y classifications of X-Y. In sum, orthogonal classifications of X-Y, when its component features were both clearly perceived and used in the experimental groups, suggested that different features were acquired to analyze perceptually and to represent XY. Network simulations further suggested that the feature vocabularies were X-->Y-->XY = [x,y] and XY-->X-->Y = [xy,x,y], respectively.

Not the answer you're looking for? Browse other questions tagged cognitive-psychology perception recognition or ask your own question.

20
Does self-directed speech help or hurt a blind subject's auditory recognition?
11
What neural mechanism explains the tendency to visually attend to the whole scene before attending to details?
6
Quantify degree to which non-diagnostic features bias category-present response
13
What is the maximum number of objects an average human being can recognize at once?
3
Can observing neutral objects prime the brain to integrate them into new ideas in the waking state?
3
How do mammals estimate the speed of moving objects?
0
What is the term for learning to group objects