Could human decision making have evolved from food finding?

One of the things human's do (and possibly other animals) is consider various options, imagine what they would be like, and then make a choice. This is called a "tree search". For example, "should I take the job offer A or B"?

Now, I wonder if this abstract decision making, may have evolved from food finding. And what is the smallest animal that does this sort of thing?

For example, imagine a small monkey or squirrel climbing a tree. When it gets to a branch it has a choice of taking the left branch or the right branch. It has to guess which branch is likely to lead to the best crop of fruit.

Once it has got fruit from one branch it may have to retrace its steps to get to the next branch.

So I would suggest that this sort of "tree search" would probably have evolved in mammals brain before humans repurposed these brain pathways to do more abstract decision making involving language.

I am trying to think of other animals that this would apply to. For example a rabbit may have a choice between branching tunnels.

A bear might have a choice of paths up a mountain and so on.

Rats are good maze finder so they must have this ability to make choices.

I wonder what other animals do this sort of thing? Rather than making a choice at random? It would have to be an animal at least as advanced enough to have a memory.

C. elegans is the simplest model organism whose nervous system has been studied extensively. C. elegans certainly makes decisions; I would feel pretty confident in saying that decision making is an ubiquitous feature in the nervous system of freely moving animals.

It is also non-controversial to consider more complex behaviors as having evolved from more simple ones (finding food/evading predation/mating). You can even reduce a lot of complex behaviors directly to those simple ones, and certainly neural mechanisms for grouping and distinguishing between different patterns (an essential component of language but also many other behaviors) are conserved across domains.

However, it is not correct to refer to all decision making as a tree search: a tree search is a particular family of algorithms and not what you describe. Even tree-like problems need not be solved with a tree search. Specifically, tree search is a computational algorithm that works well in the serial processing environment of computer science. Analogies between brains and computers often break down at the level of algorithms, because brains are massively parallel. That doesn't mean tree search-like algorithms are absent from the brain, but you should not take such a narrow view a priori.

Q: Could human decision making have evolved from food finding?

Q: What is the smallest animal that can do decision makings? … I wonder what other animals do this sort of thing? Rather than making a choice at random? 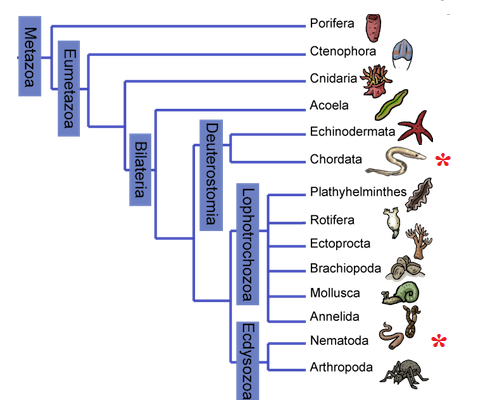 So, the earliest animals that can make decisions are probably the basal animals in each phylum in Bilateria. C. elegans, which Bryan Krause mentioned in his answer, is one of these animals. It is a small, basal animal in phylum Nematoda (marked * in the picture). It has only a nerve ring connected with ganglia as an integration center. It probably can make only simple decisions and most likely without consciousness, which is different from us, human, because the structure of its integration center is too simple to create a complex function like consciousness. The earliest animals that probably can make discussions with some form of consciousness is arguably lampreys.[3] They are small, basal animals in the phylum Chordata (marked * in the picture), class Petromyzontida. [1,3]

However, it should be noted that decision makings have been existing in more primitive forms in other animals and other living organisms for a very long time before the brain emerged. These animals/organisms are animals that have a nervous system that is only a nerve net without the brain (e.g. jellyfish, hydras, sea anemones), animals that do not have a nervous system (sponges, Trichoplax), single-cell animals, and even plants, fungi, bacteria. All these living organisms have mechanisms (such as a nerve-net or certain cellular mechanisms) to detect information in the environment and in themselves, process the information, and make appropriate (non-random) responses without using the brain.[1-6] So, with these abilities, it can be considered that they, too, can do decision makings (but in the most primitive or most basic forms). If so, it can be considered that bacteria are the smallest organisms that can make decision makings (in the most primitive form).

Roth G & Dick K [Ref 1]: Nervous systems and brains have a dual function, i.e., the maintenance of inner “vital” functions of the organism and the control of behavior of that organism within a given environment. Unicellular organisms exert the same functions and exhibit remarkably complex behaviors, although they do not possess, by deﬁnition, a nervous system. Bacteria sense nutritive substances (e.g., sugar) or toxins (e.g., heavy metal) in their environments through a large number of chemoreceptors as well as obstacles through mechanoreceptors. This diverse information is integrated and, through a chain of complex chemical reactions, drives their ﬂagella for movement. … The bacterium has a mini-memory, by which it can compare the incoming information with previous information, and this “knowledge” determines the behavior. Thus, even in these most primitive organisms we ﬁnd the three basic components for adaptive control of behavior, i.e., a sensorium, a motorium and in between information storage and processing.”

Not the answer you're looking for? Browse other questions tagged decision-making animal-cognition free-will or ask your own question.

13
Is there a random walk theory that can account for situations with more than two choices?
9
Does introducing an element of play, hunt, or competition make feeding more rewarding?
7
Research on "probabilistic thinking" in non-human animals?
24
What, if anything, sets humans apart from other species?
10
Why are humans the only species to maintain relationships with other animals simply for pleasure?
9
Predictive Experiments on Neuroscience of Free Will
1
Can't we teach other intelligent animals "complex" languages?