Childhood IQ and pattern of drug use in adulthood

A study by White et al. (2012) using a large UK sample concludes that

In this cohort, high childhood IQ was related to illegal drug use in adulthood.

Note that this does not refer to habitual use, but to have ever having tried illegal drugs:

Preliminary analyses revealed that, at the 42-year follow-up, the use of drugs in the past 12 months was rare [...] We therefore used assessments of the lifetime prevalence.

First, thank you bringing that White et al. (2009) paper to my attention -- I am currently accumulating a whole bunch of cohort studies focusing on cognitive epidemiology, or health outcomes associated with cognitive ability. Here I will share with you some of what I have collected so far with respect to drug-related outcomes.

Is this type of finding, namely positive correlation of IQ with what I'd call experimental drug use [I think the medical term is drug abuse],

To my understanding, I do hear about similar findings from time to time, but this isn't where the research funding goes. You tend not to get research grants unless you can sell drugs = death and destruction.

negative correlation of IQ with [...] dependency

Yes, this is generally the case. Dependency, and other adverse health outcomes resulting from said depedency. Moreover, the relationship tends to be non-linear. The following data is from a cohort study of 1 million Swedish conscripts, with the health outcomes being the risk for hospital admission for various disorders including alcohol-related disorders and other substance-related disorders as a function of childhood intelligence. Obviously, the use of a hospital admission endpoint means that the disorder was on the more serious end of the disorder: 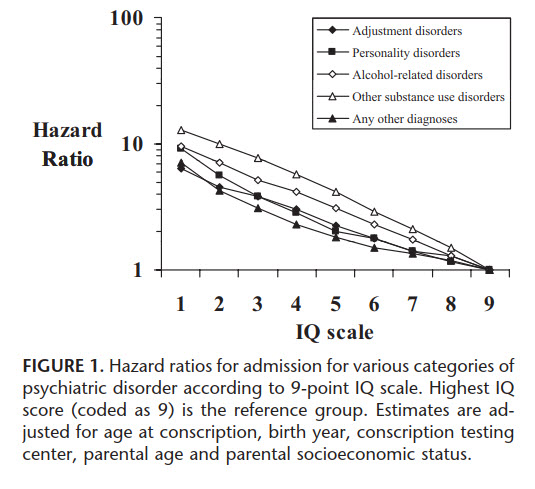 Here's another one of a similar vein. This cohort study comprised 1.4 million Swedes, looking at "substance-misuse events" as a function of stanines (this is a way of grouping your cohort into nine groups, each comprising a 1 SD increment in ability).

How these guys defined "substance-misuse events" does warrant further clarification, however:

Substance misuse events were assessed with an omnibus measure combining information about alcohol- and drug- related criminal convictions, medical treatments and deaths. This measure, which has been used previously [10,26,27], captures a wide range of alcohol and drug re- lated negative outcomes but does not include all individ- uals with substance abuse, as many substance abusers are not registered in any medical or governmental registry.

Again, you see that the risk is greatest in the the stanine with the lowest cognitive ability (estimated IQ <74), and the curve is non-linear: 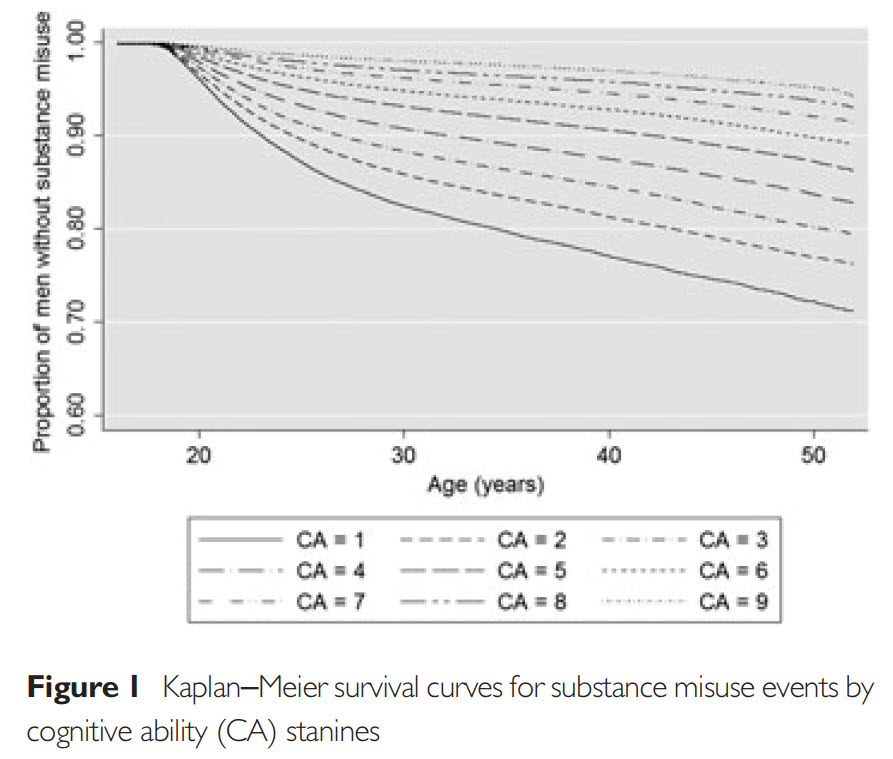 And last, but not least, some mortality data, again from the Swedes (n = 50,000). This one doesn't examine cognitive ability, but demonstrates that substance abuse and dependency, particularly in adolescence, seems to be a mediating factor in injury-related mortality. We also note that alcohol abuse as an adult also represents a significant risk:

generalizable across countries? Or [if this is far too ambitious to ask] at least reproducible in other countries?

As you can tell, the best data seems to come from the Scandinavian countries... no prizes for which country ranks #1. The whole problem with these sorts of studies is that you need to be organised and preferably have national conscription, meaning its simply untenable for most Western countries.

However, if you dig around, the best studies will come from the Swedes, Danes, and Norwegians. And to a lesser extent, the Scots followed by perhaps the Unites States.

Good question. Perhaps high cognitive ability results in greater disposable income? Most of the drugs reported are reminiscent of the substances you would find floating around a nightclub, where people are queuing up at the toilets in order to snort lines of coke off a toilet seat. And amyl nitrite is very much a gay party scene drug. However, we also note that even after controlling for adult SES, the effect is attenuated but still remains.

Who knows -- perhaps getting totally fucking high from time to time is part of the normative human experience, while those with lower cognitive ability are too busy drinking the bad thoughts away with alcohol. It is, nevertheless, a great find :p

I don't know how reproducible those findings are, but this study (Schretlen, van der Hulst, Pearlson, & Gordon, 2010) found a moderate association between fluid intelligence and openness to experience:

If we add to that the claim that the use of certain drugs is positively correlated to openness to experience, then we have some support for your idea of this trait as a confounding variable in your study results.

However, we should also keep in mind that drug use itself may influence openness to experience (MacLean et al, 2011), which should complicate things further.

Not the answer you're looking for? Browse other questions tagged intelligence addiction drugs or ask your own question.

5
Can general intelligence be understood as pattern analysis?
6
Is it dangerous to take an antipsychotic drug irregularly?
4
Are neural adaptation and drug tolerance to psychoactive drugs related?
3
Long term cocaine use and personality change - Scientific references?
1
Smoking and cognitive abilities
3
Are there cases of drug addict that "forget" their addiction after some brain damages?
0
What is the most ideal way to study the effect of a drug on a person over time?