I've experienced cocaine addicts first hand and noticed the development of egoistic personality traits such as selfishness or loss of empathy in cocaine addicts. Are there any scientific references which support that observation?

I couldn't find a longitudinal study on this, which would be direct evidence, but it seems plausible due to circumstantial evidence:

Twenty-four healthy recreational cocaine users participated in this placebo-controlled within-subject study. [...] Findings show that cocaine impaired recognition of negative emotions; this was mediated by the intensity of the presented emotions. When high intensity expressions of Anger and Disgust were shown, performance under influence of cocaine 'normalized' to placebo-like levels while it made identification of Sadness more difficult. The normalization of performance was most notable for participants with the largest cortisol responses in the cocaine condition compared to placebo. It was demonstrated that cocaine impairs recognition of negative emotions, depending on the intensity of emotion expression and cortisol response.

younger age-of-onset of cocaine use was associated with more pronounced empathy impairment [...] 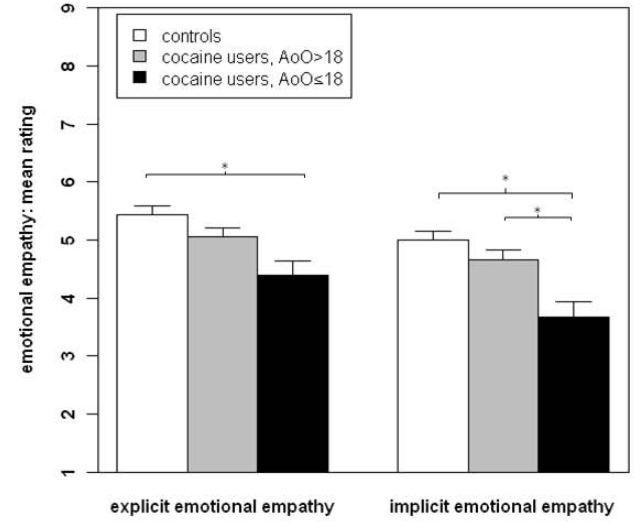 With risk of being pedantic, this last study is also not direct evidence, because there could be some other factor (genetic or environmental) that causes someone to both take up cocaine use early in life and also cause them to exhibit lower empathy later in life (which is the only time when empathy was measured in this study design).

Not the answer you're looking for? Browse other questions tagged addiction drugs or ask your own question.

5
Does sugar change our short-term behaviour?
6
Is it dangerous to take an antipsychotic drug irregularly?
8
Childhood IQ and pattern of drug use in adulthood
2
Can you get addicted from using topical or local anaesthetics to ease pain?
4
Best meditation techniques to overcome Behavioral Addictions?
0
Is there a formal name for the compulsive and recurrent urges to pick one's nose in order to remove perceived imperfections?
4
“Dependence” in DSM-5
4
Are neural adaptation and drug tolerance to psychoactive drugs related?