I have an experimental study with a list of demographic and related questions and in order to identify data from participants that were potentially just answering the questions at random (to get through them more quickly I would assume), I've included two very similar 7-point likert scale questions at different points in the survey. My assumption would be that since the questions are reflective, the answers participants should give will be at least somewhat similar between the two questions (eg, it should be very unlikely that a participant answers 7 to one question yet 1 to the other).

I haven't yet collected the data, however I would like to have a method for determining which sets of data are suspicious (might be considered for exclusion in analysis) based on these control questions. One method might be to simply determine where the data fit on a Gaussian distribution. However, I think that the limited discriminating power of a 7-point scale would make this an improper test. My other idea was to do a cluster analysis on the data, looking for five groups: three along the line of correlation (between the questions), and two to examine unusually high/low and low/high values. I thought this could provide better suggestions for which data sets might be unusual since it wouldn't use somewhat arbitrary comparisons, it would only use the data given.

I'd really appreciate any suggestions for a better method, or improvements I could make as well as any comments toward more "standard" practices in this area, since I'm somewhat new to research.

As Jeromy Anglim points out, I think it's important to consider the goal here. Using a two question Likert scale is probably not good enough to reliably detect outliers: What if the respondent checked all '4s' on a 7-point Likert scale? Reversing the scale would have no effect.

One alternative approach is to employ an instructional manipulation check (Oppenheimer et al., 2009). The gist of the technique is to trap participants into answering a question in a specific way that they could only have done by reading the instructions carefully. Here is an example from a survey administered by Facebook: 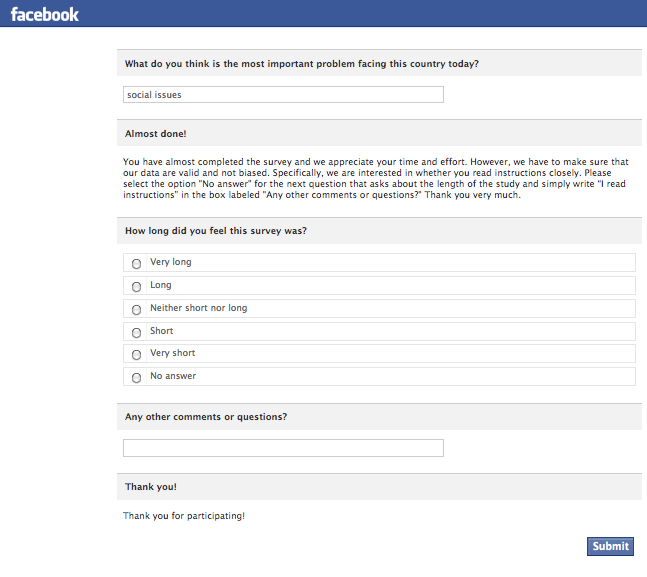 While this technique may throw out a few good participants, it will almost certainly raise the signal-to-noise ratio of your data by only including participants who followed instructions and read questions before answering.

Another tried and true technique is to use a computer-administered test and look at reaction times. You may be able to throw out a few responses (or whole participants) by simply looking for outliers in response time that are below the mean.

Preventing random responding: An important first step is to think about ways to prevent random responding from occurring in the first place. A few ideas include: administer the survey face to face; have an experimental invigilator present; communicate the importance of the research to participants and the importance of participants taking the research seriously; use financial remuneration.

That said, there are situations where participants do not take a study seriously responding randomly for example. This seems to be particularly an issue when collecting data online.

General approach: My overall approach to this is to develop multiple indicators of problematic participation. I'll then assign penalty points to each participant based on the severity of the indicators. Participants with penalty points above a threshold are excluded from analyses.

The choices of what is problematic depends on the type of study:

Mahalanobis distance is often a useful tool to flag multivariate outliers. You can further inspect the cases with the largest values to think about whether they make sense. There is a bit of an art in deciding which variables to include in the distance calculation. In particular, if you have a mix of positively and negatively worded items, carelessness is often indicated by a lack movement between the poles of a scale as you move from positively to negatively worded items.

In general, I also often include items at the end of the test asking the participant whether they took the experiment seriously.

Discussion in the Literature

Osborne and Blanchard (2010) discuss random responding in the context of multiple choice tests. They mention the strategy of including items that all participants should answer correctly. To quote

These can be content that should not be missed (e.g., 2+2=__), behavioral/attitudinal questions (e.g., I weave the fabric for all my clothes), non-sense items (e.g., there are 30days in February), or targeted multiple-choice test items [e.g., “How do you spell ‘forensics’?” (a) fornsis, (b) forensics, (c) phorensicks, (d) forensix].

This is not directly an answer to your question but, in line with my comments to another answer, my main advice would be “don't worry about it”.

Jeromy Anglim's tips are all good but I am still unconvinced that this is an important issue for most people. Since you are new to research, there are probably dozens of other things you should worry about.

Furthermore, if you do see evidence that there is a problem (extremely short response times, contradictory answers, large number of respondent providing absurd answers to open-ended questions), I would argue that you should first step back and ask yourself if what you are asking is reasonable (Do the task make sense? Can people be expected to have an opinion about the topic you are investigating? Are you demanding too much effort?) rather than trying to sort out “bad” respondents.

If you really want to dig into the subject and look up some literature, another name for this phenomenon is “satisficing”. “Response set” is a related idea that might be of interest.

Not the answer you're looking for? Browse other questions tagged methodology survey or ask your own question.

1
How to identify participants answering online questionnaires who have not paid attention?

8
Appropriate metric(s) for quantifying the accuracy gain obtained from averaging dyads of estimates instead of adopting individual estimates?
8
Are presence questionnaires valid in a between-subjects design?
1
Can I use Mechanical Turk for a longitudinal study?
4
How to frame survey questions to get honest response?
2
Survey questions to test competitiveness
3
Recommended resources (journals, blogs, etc) for nurturing a background of statistical/methodological rigour in behavioural science research?