Almost everyone likes a good story, the way in which it is delivered matters, but most people love a good story in one form or another, whether it's delivered through conversation, a book, a video game, a movie, or even if it's just them trying to make sense of how a shoe got into a swimming pool (That's right, it's ok if the story is created in your own mind, it's still a story, so we seem to like telling stories as much if not more than we like hearing or reading them).

How does this happen? And is this something that can be controlled (i.e. could you make someone who prefers violent stories prefer switch over to preferring romance stories? Can someone be conditioned to not be interested in any stories at all no matter what they may be about?)

Why is it also that once we start with a story, it can be hard to stop because you want to know what happens next or want to know how it ends? Why do some of us care if people "spoil" the ending for us by telling us what happens before we see or read or hear it, while some of us seem not to care?

Has any real research been done on this?

I'll try to roughly answer your question. It's not an easy one, and by no means does it have a narrow answer. Scientists have suggested, like you mentioned that stories show a lot about the basis of human thought

From "The Storytelling Animal" (Jonathan Gottschall)

“Some thinkers, following Darwin, argue that the evolutionary source of story is sexual selection, not natural selection. Maybe stories, and other art forms, aren’t just obsessed with sex; maybe they are ways of getting sex by making gaudy, peacocklike displays of our skill, intelligence, and creativity—the quality of our minds. Thumb back a few pages to that image of the Kung San storyteller on page 19. Look at the young woman sitting to the storyteller’s left—very pretty, very rapt. That’s the idea. 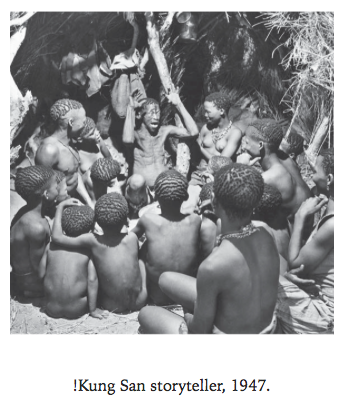 Or maybe stories are a form of cognitive play. For the evolutionary literary scholar Brian Boyd, “a work of art acts like a playground for the mind.” Boyd suggests that the free play of art, in all its forms, does the same sort of work for our mental muscles that rough-and-tumble play does for our physical muscles.

Or maybe stories are low-cost sources of information and vicarious experience; maybe, to modify Horace, stories delight in order to instruct. Through stories we learn about human culture and psychology, without the potentially staggering costs of having to gain this experience firsthand.

Or maybe story is a form of social glue that brings people together around common values. The novelist John Hardner expresses this idea nicely: "Real art creates myths a society can live by instead of die by." Go back again to the Kung San storyteller. Look how he has brought his people together skin against skin, mind against mind.

Why do some of us like stories to the point of obsessing over them?

“Fiction, like cocaine, is a drug. People may invent high-minded aesthetic (or evolutionary) justifications for their fiction habits, but story is just a drug we use to escape from the boredom and brutality of real life. Why do we go to see a Shakespeare play, or watch a film, or read a novel? Ultimately, from Kessel’s point of view, it is not to expand our minds, explore the human condition, or do anything else so noble. We do it for kicks.

Many evolutionary thinkers would agree with Kessel’s position. What are stories for? Nothing. The brain is not designed for story; there are glitches in its design that make it vulnerable to story. Stories, in all their variety and splendor, are just lucky accidents of the mind’s jury-rigged construction. Story may educate us, deepen us, and give us joy. Story may be one of the “things that makes it most worthwhile to be human. But that doesn’t mean story has a biological purpose. Storytelling, in this view, is nothing like the opposable thumb—a structure that helped our ancestors survive and reproduce. In this view, story is more akin to the lines on your palm. No matter what your fortuneteller claims, the lines are not maps of your future. They are side effects of the flexion of the hand.”

How does this happen? And is this something that can be controlled?

I couldn't find any experiment that, like you mentioned, discussed whether you can change someone's preference of what kind of stories they like. If someone finds any study, please mention it in the comments!

Why is it also that once we start with a story, it can be hard to stop because you want to know what happens next or want to know how it ends? Why do some of us care if people "spoil" the ending for us by telling us what happens before we see or read or hear it, while some of us seem not to care?

From this source, an excellent article on storytelling.

The “cliffhanger” just may be the oldest trick in the writing book, especially writing for television, but there is a reason why it’s used so often…

Despite our numerous exposure to this method, our brain just can’t “get over” suspenseful moments: it’s a relationship that just won’t die, we will always want to know what happens next.

In fact, suspense works so well that the hotly debated Zeigarnik Effect would have you believe that it’s the best way to kill procrastination.

Research in that area seems to point to humans being much more inclined to finish something that has already been started (researchers interrupted people doing “brain buster” tasks before they could complete them… nearly 90% of people went on to finish the task anyway, despite being told they could stop).

Suspense in stories really allows you to create an addictive narrative, as long as the suspense appears early enough to capture interest, and doesn’t keep people hanging on forever

Has any real research been done on this?

I might elaborate on this further. I don't want to comment without first exploring the research I have quoted to see whether they are good studies. If anyone else knows of any experiments related to this field, please mention it in the comments.

Not the answer you're looking for? Browse other questions tagged addiction evolutionary-psychology or ask your own question.

2
Why do people get addicted to things like TV, Facebook, games?
0
Why do we long for freedom?
2
Is there an evolutionary psychology explanation why children have high pitched voices?
1
Predisposition toward organizing information in a hierarchical manner?