Do action video games have an effect on spatial skills?

I've just watched a TED talk by Daphne Bavelier, who seems to be a major researcher on plasticity and video games. In it she presents results from a controlled lab study in which participants needed to perform mental rotations (around 14 minutes into the video), before and after having played 10 hours of action video games over a period of 2 weeks. She demonstrates results which show an improvement up to 5 months after having gotten the 'training'. 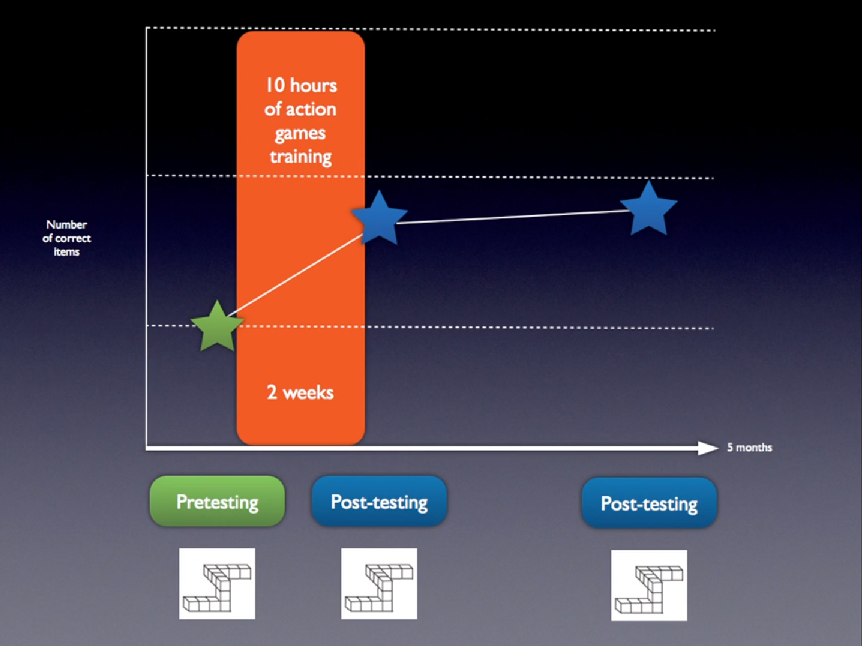 I'm interested in finding out more about this research and the methodologies it followed. So my first question is whether somebody could link me to the original research.

My skepticism comes from a previous question on video games in which D. Bavelier is mentioned often. It has gotten some concerned responses involving methodological flaws.

The concept of mental rotation was introduced by Shepard & Metzler (1971). The 3D assemblages of cubes were part of their original experiment. Vandenburg and Kuse (1978) later developed a paper-and-pencil test based on this prior experiment, named the Vandenberg and Kuse’s Mental Rotation Test (VMRT).

The study which Bavelier most likely refers to is one done by Feng et al. (2007). [PDF]

In Experiment 2, we compared spatial attention and cognition in men and women before and after 10 hr of action-video-game training. A control group trained for 10 hr with a non-action game. [...] In addition, we assessed higher-level spatial abilities using a mental rotation test (MRT; see Fig. 1b). We expected to ﬁnd enhanced MRT performance as a by-product of improvements in spatial attentional capacity after training.

The games played were Medal of Honor: Pacific Assault by the experimental group, and Ballance, a 3-D puzzle game by the control group.

We had not originally planned a follow-up testing session; however, we were able to contact and retest all 20 subjects after an average interval of about 5 months (16–24 weeks).

Both males and females in the experimental group improved, but there was no signiﬁcant change from pretest to posttest in the control group [...] furthermore, the improvement in the experimental group was larger for females (2.0 to 2.7) than for males (2.9 to 3.2), F(1, 8) 5 5.193, prep 5 .87, Z 2 5 .39, and the performance of the females on the posttest was indistinguishable from that of the males in the control group. Although the gender difference on the MRT was not eliminated, its size was much reduced (see Fig. 3, lower left panel).

Although not the exact study which Bavelier demonstrated, a study done by Isabelle D. Cherney (2008) demonstrates similar results using the VMRT test. A huge section of the paper reviews existing relevant research which might be interesting to look into. The focus of this particular study is to ...

... examine whether the type (3-D vs. 2-D) and delivery (massed vs. distributed practice) affect the degree of improvement of males’ and females’ mental rotation performance and how individual differences such as anxiety, prior spatial experiences such as computer game play, and mathematical performance might affect performance. Two existing visuospatial tests, Vandenberg and Kuse’s (1978) mental rotation test and the card rotation test (CRT; Educational Testing Services Sanders et al. 1982) that have shown gender differences and that are of different levels of difficulty, were used.

Bonferroni adjusted paired sample t-tests on both mental rotation pre-and posttest scores showed that, for the VMRT there were significant improvements for women, t(30)=−3.6, p=.001, but not for men 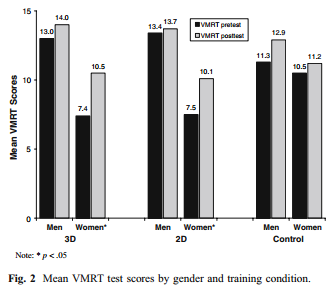 Not the answer you're looking for? Browse other questions tagged reference-request plasticity video-games spatial-cognition or ask your own question.

18
Any work being done on Perception, Action, and/or Cognition in Video games?

18
Any work being done on Perception, Action, and/or Cognition in Video games?
11
What is the effect of studying logic or mathematics on general thinking skills?
3
Does playing video games increase attention and learning agility, therefore career performance
2
What is the psychology behind addictive video games?
1
Are spatial memory and mental mapping skills the same?
3
Psychological explanation for the success of "class systems" in video games