How does Cannabis cause psychosis?

Whenever I research cannabis induced psychosis, I mostly get two types of results:

2) There is no evidence that cannabis actually causes psychosis directly, rather it seems to be a correlation issue. (also misleading propaganda)

However, my two best friends experienced permanent psychosis immediately after a heavy cannabis use episode (on separate occasions).

I am convinced that cannabis is perfectly capable of causing or "unlocking" psychosis. I don't think that there is any question to this.

But how does it actually work?

In one of the cases, my friend had some very strong cannabis to smoke, after which he started to hear voices, and this never ended, even months after stopping smoking. Only after anti psychotic medication (Seroquel) did the symptoms stop, and they seem to be permanent, stopping the medication causes the symptoms to come back.

From what I understand, Seroquel suppresses dopamine, while cannabis has nothing to do with dopamine.

So how does cannabis induce a dopamine related disorder?

Research into the "how" is ongoing. From the most recent review I could find, the effect of cannabis on the dopamine system is not entirely elucidated, even on a quantitative level:

The onset of effects of THC appears to be delayed relative to the onset of other psychotomimetic drugs, suggesting that the effects of THC may be downstream to its primary site of action. Given that the endocannabinoid system is principally a neuromodulatory system, perhaps the psychosis-relevant effects of THC are related to the consequences of CB1R activation on other neurotransmitter systems implicated in the neurobiology of psychosis. Cannabinoid Dopaminergic Interactions: Single doses of dopamine (D2) receptor antagonists (olanzapine and haloperidol) have been shown to reverse the acute psychotomimetic effects of THC in healthy subjects in two HLS (5, 6) although not in the third (7). Furthermore, chronic D2 antagonist treatment failed to protect schizophrenia patients from the symptom exacerbating effects of THC (32).

Preclinical studies demonstrate that THC administration increases striatal dopamine release by 25-100%, but the human data are mixed with two studies reporting no significant increase (91, 92) and one study reporting a 3.9% increase in striatal dopamine release (93). These studies had small sample sizes and differed in the THC doses, routes of administration and imaging methodology. A re-analysis combining data from two studies (91, 93) reported a significant but small increase in THC-induced dopamine release (94). Of note, in contrast to amphetamine and cocaine, which induce large increases in striatal DA release (10-30%) in humans, THC at doses that produce robust behavioral effects induces small (2-5%) increases in dopamine release. More recently, Kuepper et al, 2013 reported that individuals with psychosis as well as those with a family history of psychosis demonstrated THC-induced striatal dopamine release, but this was not observed in the controls suggesting that dopamine may be involved particularly in the effects of THC in those with an increased risk for psychosis (95).

The review also covers several genes that have been implicated in both schizophrenia and vulnerability to THC-induced psychosis:

In the striatum, clearance of synaptic dopamine is highly dependent on the dopamine transporter (DAT). A polymorphism of the DAT1 gene is associated with lower enzymatic activity and thus, higher dopamine levels in the striatum, and has previously been associated with schizophrenia (81). Bhattacharyya et al. reported that individuals with the 9-repeat allele showed increased sensitivity to acute THC-induced psychotic symptoms (82).

The enzyme AKT1 inactivates glycogen synthase kinase by phosphorylation and their interaction has been implicated in schizophrenia (83, 84). Cannabinoids stimulate the AKT1 pathway via CB1Rs and CB2Rs. Bhattacharyya et al found that a polymorphism of the AKT1 gene (the GG genotype of the SNP rs1130233) moderated sensitivity to the acute psychosisinducing effect of THC (82). Furthermore, a synergistic influence of DAT1 and AKT1 genotypes on THC-induced psychotomimetic effects was also reported.

All the DAT/AKT1 data on healthy individual using cannabis with is based on exactly one study, so I reproduce their graphical finding below: 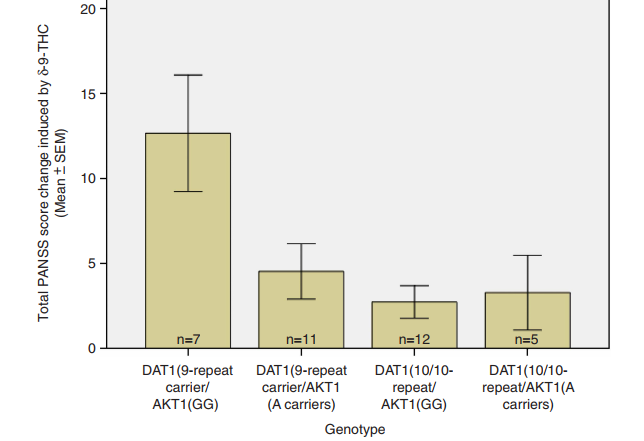 Alas they only reported total PANSS.

In the review, there's more discussion of COMT, which has seen more attention, but suffice to say the results on that have been mixed. It remains to be seen in the DAT1/AKT1 study can be replicated. It does seem that AKT1 alone has an impact, based on more studies that found the same polymorphism of AKT1 impacts first-episode psychosis in cannabis users and psychotomimetic effects in healty cannabis smokers.

I find it interesting that yet another study on first-episode psychosis has implicated AKT1 polymorphism, however, this time with an interaction that enhanced its effect... except that the other gene involved was not DAT1 (as in the case of psychotomimetic effects on healthy individuals) but rather with DRD2.

Perhaps 10 years from now, this question will have a less tentative answer.

To further complicate the issue, cannabis has more than one active substance:

CBD is the second most prominent cannabinoid in cannabis. Unlike THC, CBD displays CB1R antagonism/inverse agonism amongst several other modulatory effects on the endocannabinoid system. The potential antipsychotic effects of CBD have drawn increasing attention (20) and some HLS have examined the interactive effects of THC and CBD. Pretreatment with CBD is associated with lower THC-induced psychotomimetic effects, paranoia and verbal memory impairments (12, 21). Furthermore, while THC resulted in increased psychotic symptoms and skin conductance responses during processing of fearful faces; CBD, led to a reduction in anxiety and a decrease in skin conductance response (22).

Yet another review that focuses only on THC's effect on dopamine mentions some of the challenges in observing dopamine changes in humans following THC administration: insufficient PET camera resolution and doses that are substantially less than those used in animal models.

Not the answer you're looking for? Browse other questions tagged psychosis or ask your own question.