Is it easy in languages other than English to read a paragraph where all but the first and last letters of every word have been rearranged?

I was really surprised how fast I was able to read and comprehend following text:

Does the same phenomenon exist for Asian, non-Latin alphabet based type languages like Mandarin?

I have tried to scramble longer words as suggested in answer below and it becomes more difficult to read: "Ceefrconne of iantrintaeonl enatldocatiiuss" (Conference of international educationalists).

Moreover, if letters just pair-wise permuted - it easier to read than random permutation. My initial feeling is that it should be certain metric that define closeness(distance) of the words to its right spelling. Then "easiness" and speed of comprehension will be proportional to that distance.

language language-processing
Share
Improve this question
edited May 12 '15 at 3:00

The scrambled words game is very useful in persuading the less sophisticated to take a passing interest in their own cognitive processes! it is intriguing and also rewarding as it shows we can do something apparently rather difficult more easily than expected. However, the difficulty will be greater for second language learners at earlier stages of study.

Thinking about the unscrambling process is also a useful illustration of certain established principles of cognitive psychology, many of which have a close relation to information-theoretic measures like message redundancy and channel noise. Such matters may well be further detailed in the references given by Leo, so here I will just mention a few obvious ones without going into subtleties. Those setting cryptology-based puzzles, like anagrams or crosswords, have probably given considerable thought to many of the same themes.

Most examples of word-scrambled texts I have seen conform to the case where individual words have the usual separators (spaces, commas etc.). It is a reasonable hypothesis that primary word-segregation is a (pre-conscious) analysis, fairly well automated.

Another fairly automated effect, though quite dependent on individual experience

The edge-effect enhances perception of letters at the beginning and end of a word. Scrambled words with the first and last letters intact also greatly benefit because these strongly-perceived letters are precisely the ones often generating superior cues to the associative thesaurus, perhaps including a subvocal phonetic component.

Whilst short words are objectively easier, word-length itself provides significant information, and in longer words this may partially compensate for increased complexity.

Less familiar (or exotic) letters are more readily noticed in scrambled text due to an analogue in selective attention to effects of feature-contrast long known of in studies of short-term memory. Such letters assist also because they restrict search, due to their presence in a much smaller subset of lexical items.

This is dependent on the ongoing robustness of the perception of meaning. A text which would be challenging even unscrambled will offer much greater difficulty if scrambled.

English, whose case-endings and verb conjugations have largely been smoothed away is particularly dependent on word-order in phrases as a cue to the function of a particular word (as verb, noun, adjective, adverb &c)

In longer words characteristic high-frequency constituents (things like "-ness", "-tion", "-ily", "pre-" &C) may be cued simply by the presence of the letters in the word. This is similar to, but distinct from, word-frequency effects.

Certain combinations of letters may increase the perceptual effort required because they have strong internal coherence, but happen to be misleading in the particular case.

Before pronouncing on the likely differences between languages, I think it would be more worthwhile to obtain a clear and thorough understanding of the roles of the above factors, and similar ones, in the process of sentential scrambled word-perception.

The neologism used to describe this phenomenon is Typoglycemia.

It relates to the cognitive processes behind reading written text.

Randomising letters in the middle of words have little or no effect on the ability of skilled readers to understand the text.

Because the human mind does not read every letter by itself but as a whole, it would work for any given language where we can apply the same randomisation and keep the words separated in the same order.

Let's see what happens when we scramble the compound lexeme:

Virtually impossible! Now let's see when we scramble each lexeme, then compound it:

The composition being nearly just as readable as per lexeme!

Feel free to try another here.

This rather tame example now makes little sense, but does not quite appear completely disordered (with the exception of the preserved third line).

The ‘jumbled word effect’ is due to the special way in which the human brain encodes the positions of letters in printed words.

Psycholinguists investigate this effect with a procedure called masked-priming where a target word is primed with a briefly presented stimulus (usually a mix of target's letters). This lead to a model of word recognition that includes several consecutive steps from letter feature extraction by the occipital cortex to the word activation in the visual word form area. Within this model, all letters are individually recognised in their actual printed positions (position-dependant phenomenon) and are further combined in groups of letters. These groups of letters are not encoded with their absolute positions but their relative positions to each other. It is formalised in a model as:

When we read, we automatically switch from an absolute-position code to a relative-position code, and this is where the jumbled word effect arises. The scrambled word activates the same groups of letters. 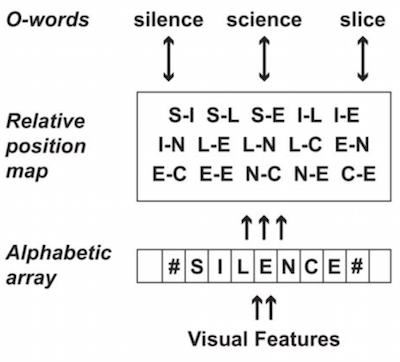 This phenomenon has been observed in languages that use an alphabetic script, English included. There is an on-going debate on the locus of such effect (purely visual attention or related to literacy).

Yes, to some extent as discussed by @David Holden

Does the same phenomenon exist for Asian, non-Latin alphabet based type languages >like Mandarin?

It has been observed in Thai.

Not the answer you're looking for? Browse other questions tagged language language-processing or ask your own question.

7
How are humans able to read scrambled text/characters (e.g., CAPTCHA)?