Is there a way to compare the subjective experiences of two different subjects upon an object?

It is the major problem of all cognitive sciences to deal with subjectivity. On the other hand, in order to figure out what is cognition or psychology, one must ultimately deal with this problem. As a starter, I wonder if there is any study about identicalness of perceptions among subjects. Are the perceptions of two different subjects on an object identical? In other words, can the perceptions of two subjects about a tomato differ from each other? One may experience the redness of tomato as what the other call blue.

Can We Compare Subjective Experience?

Consider this pain scale, variations of which are commonly used in medical settings:

What's helped us to answer a question like this comes from Linda Bartoshuk's work on taste perception in so-called supertasters vs. normal tasters.

Bartoshuk famously uses blue dye to reveal the number of tastebuds on participants' tongues. As you can see below, supertasters have a lot more tastebuds than normal folks (and what Bartoshuk calls "non-tasters"). As a consequence of this, we see variation in taste perception.

Without getting into too much detail, the solution to between-group comparison is cross-modality matching. Basically, we ask participants to compare their experiences of bitterness to, for example, the brightness of a light.

Bartoshuk uses this example with sound that I find easy to understand:

You can also use imagined sensations. For example, Fast (2004) has found that:

Consider this scale, which uses cross-modality matching to assess perception of candy sweetness intensity between supertasters (ST) and non-tasters (NT): 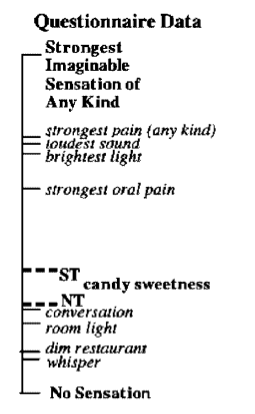 When using these matched modalities, you get systematic differences in sweetness perception that you otherwise wouldn't see using the standard 9-point sensory scale above.

I didn't give a particularly comprehensive outline of cross-modality matching, so for more information, consult the sources below.

These are some of the common ways that psychologists use to test subjective experience:

There are many other ways to indirectly study human (and animal) emotion and thought, and it is part of the ingenuity and creativity of scholars to invent ever new study designs. There are too many of them for me to list them here (and I certainly don't know half of them), but if you are interested, there are many books in every scientific library that teach about designing studies, and many articles (some freely available online) that show how research is actually done.

Not the answer you're looking for? Browse other questions tagged cognitive-psychology perception or ask your own question.

3
Why do our senses evoke different subjective experiences
19
Is the mathematician's activity psychologically healthy?
8
Does correcting responses after feedback lead to better learning?
2
Does adopting personal routines accelerate cognitive decline?
9
The prisoner dilemma does not violate classical probability laws
3
Importance of colors in learning process?