What research has been done on brain-to-brain interfaces?

Is there an existing research area focusing on brain to brain interfaces? If so, what are some papers that have been published in this area?

reference-request theoretical-neuroscience brain-computer-interface
Share
Improve this question
edited May 5, 2015 at 12:42

Rao et al. 2014 claims to be the first demonstration of a brain-brain interface in humans, using EEG and TMS.

We describe the first direct brain-to-brain interface in humans and present results from experiments involving six different subjects. Our non-invasive interface, demonstrated originally in August 2013, combines electroencephalography (EEG) for recording brain signals with transcranial magnetic stimulation (TMS) for delivering information to the brain. We illustrate our method using a visuomotor task in which two humans must cooperate through direct brain-to-brain communication to achieve a desired goal in a computer game. The brain-to-brain interface detects motor imagery in EEG signals recorded from one subject (the “sender”) and transmits this information over the internet to the motor cortex region of a second subject (the “receiver”). This allows the sender to cause a desired motor response in the receiver (a press on a touchpad) via TMS. We quantify the performance of the brain-to-brain interface in terms of the amount of information transmitted as well as the accuracies attained in (1) decoding the sender’s signals, (2) generating a motor response from the receiver upon stimulation, and (3) achieving the overall goal in the cooperative visuomotor task. Our results provide evidence for a rudimentary form of direct information transmission from one human brain to another using non-invasive means.

There were 2 pioneering papers published in 2014, both claiming to be the first in humans.

Here we show how to link two human minds directly by integrating two neurotechnologies – BCI and CBI –, fulfilling three important conditions, namely a) being non-invasive, b) cortically based, and c) consciously driven (Fig. 1). In this framework we provide the first demonstration of non-invasive direct communication between human minds. 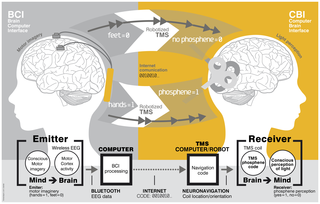 Rao et al (2014) (mentioned by @Josh) was published later (November), but the experiment itself was conducted earlier (August 2013).

We describe the first direct brain-to-brain interface in humans and present results from experiments involving six different subjects. Our non-invasive interface, demonstrated originally in August 2013, combines electroencephalography (EEG) for recording brain signals with transcranial magnetic stimulation (TMS) for delivering information to the brain. ... Our results provide evidence for a rudimentary form of direct information transmission from one human brain to another using non-invasive means. 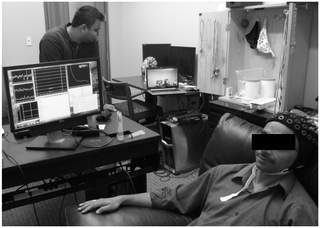 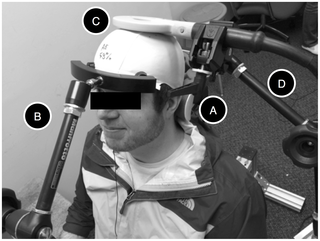 Both experiments used an EEG to detect activity in the brain of the sender, and TMS to stimulate activity in the brain of the receiver. The 2 experiments had slightly different approaches however. In the Rao et al study, the motor cortex was used, whereby the sender clicking a mouse caused the receiver's hand to twitch. This was used to play a simple video game where one player had access to information that the other player did not. In the Grau et al study, the sender's motor cortex was also used, but on the receiver side, the TMS was directed to the occipital lobe - the visual cortex - causing flashes of light to appear to the receiver. This set up was used to deliver a message, rather like a telegraph, using encoded "bits" (1s and 0s represented by the light flashes). This is more like telepathy, albeit a very primitive version of it.

A TED talk by Miguel Nicolelis on Brain-to-Brain interfaces, mostly focusing on rats and monkeys, but he mentions about humans at the end.

Not the answer you're looking for? Browse other questions tagged reference-request theoretical-neuroscience brain-computer-interface or ask your own question.

0
Text-to-brain literature?
0
Where is motor skill function located within the brain?

5
Why does optogenetics not mean that perfect brain-computer interfaces are possible?
10
Importance of Neural Synchrony to Cognition
4
What are the different theories about how the brain processes speech?
3
What are some credible conferences and journals in computational neuroscience?
1
What are the top contributions from neuroscience to AI and viceversa? How much progress has been made from the interaction between these two fields?
3
List of research paper meta information sites
4
Has there been research on the impact of gay parents on the sexual orientation of adopted children?
0
Has there ever been a split brain pianist?