How does the brain break down visual information for processing? What "channels" is visual input broken into?

Some time ago I remember reading about how the human brain breaks down visual information into a number of individual "channels".

For example, one channel might focus on edges and lines, another might focus on being a contrast map, while another provide a color information overlay. Each "channel" being a much more simplified part of the entire visual input.

From what I understood, modern research into the visual cortex has provided some insight into what the channels might be and how they're broken down. If my understanding of current research is correct I was hoping to find some more detailed information explaining how the visual information is broken down and processed (articles at the technical level of Scientific American are fine, so long as they detail the types of "channels" present).

My desired take-away from this is to brainstorm ideas for how I might better pre-process an image into feature data for a standard neural network learning algorithm, based on the human experience.

The human visual processing system receives input from the eyes, and then passes it through a number of areas of the brain that break it down, process it in various different ways, recombine it, and break it down again several times. I'm assuming this question is only about the visual cortex, general theories about how information might be broken down for processing there, and only concerning parallel-processing (channels), as opposed to sequential specialization (layers), otherwise the answer should fill up a textbook.

The traditional understanding of the visual cortex divides it into 2 main pathways:

Each V1 transmits information to two primary pathways, called the ventral stream and the dorsal stream.

The "what" and "where" pathways are also sometimes referred to as the "perception" and "action" pathways, respectively. 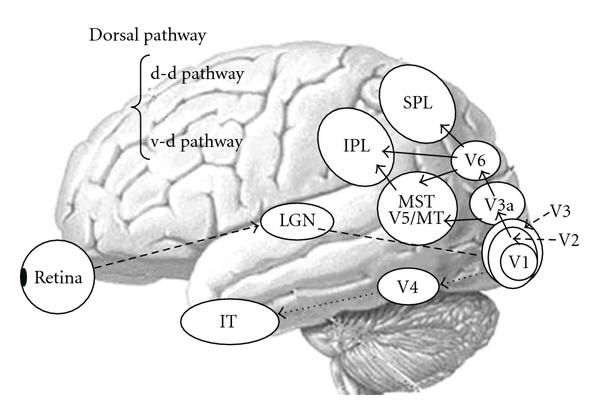 Another common theory about the visual cortex identifies at least 3 modules: Motion, colour, and form. Evidence for these proposed modules comes largely from lesion studies and related disorders of the visual system. In general, an impairment in one module doesn't seem to affect the others, suggesting that these specializations are processed independently and in parallel. However, it is not clear if they form distinct pathways through the visual cortex.

There is also evidence for a long-term memory pathway (visual-perirhinal-hippocampal stream) that feeds memory information from and to the visual cortex. Many other pathways have been postulated; this field of research is very active, consensus on further detail remains elusive for now.

Complications to such models:

Such "pathway" models of the visual cortex are limited by a number of factors:

The visual cortex may not be ideal inspiration for ANNs, especially since it only handles a not-very-early part of the process, such that the signals it receives have already undergone significant modification from the raw stimuli. Additionally, its pathway structure is fairly complex, and not fully understood. There have nonetheless been attempts to simulate parts of the visual cortex and compare to non-biologically inspired networks.

The LGN - an area of the brain involved earlier in the process - may be more amenable to some inspiration and simulation, as it is a simpler structure with clearer functions and pathways. It handles some of the functions you described at a more basic level, including some edge detection, colour processing, contrast, and various other aspects of perception such as depth, brightness, and movement, albeit with many of the same caveats as mentioned for the visual cortex.

Not the answer you're looking for? Browse other questions tagged vision neural-network or ask your own question.

10
How does the brain act on the information gained via eye saccades?
7
Do eyes accommodate to color?
3
Does the brain stop processing data when the eyes move?
3
Does the retina encode visual information like a Bitmap or an SVG?
3
How many possible states does a brain have?
2
What are the estimates in total neurons and average connections per neuron for each of the processing areas of the visual cortex?
4
How does the brain structure 3D visual data?
4
If the optic nerve transmits to both hemispheres, how do split-brain experiments work?