How do moral judgments change for older adults?

There have been numerous studies that compare the moral judgment/sensitivity of adults and children (a good example is this paper by Decety, Michalska and Kinzler, showing significant differences between the moral judgments of each group). However, I am curious if there exist any similar studies for older adults. For example, is there any significant difference between the moral sensitivity of adults over 60-70 and younger adults?

... moral judgment ... is "the ability to reason correctly about what 'ought' to be done in a specific situation."

Research on moral judgement was pioneered by Jean Piaget, summarized in his book "The Moral Judgment of the Child" (1932), in which he implies that moral development levels off in adolescence. Piaget introduced the standard moral judgement task paradigm that is still often used today to assess moral development by asking subjects to make moral judgements on particular stories or dilemmas. In his research, peak performance on these tests was achieved around mid-adolescence, and he never bothered to test older subjects. Interestingly, performance of older adults was only finally put to the test in 1996. This study showed that (a) moral development does not peak in adolescence, as adults perform slightly better, and (b) older adults do not differ much in overall performance than younger adults, but the details are mixed - in some areas of morality they perform better and in others worse.

Beginning in the 1960's, Piaget's work was extended by other researchers such as Kohlberg and Gilligan to include moral development throughout people's entire life-span. This spurred much research on moral development in adulthood. For example, a study published in 1997 summarizes the dubious state of the research at the time as follows:

Results of that particular study are depicted in the image below: 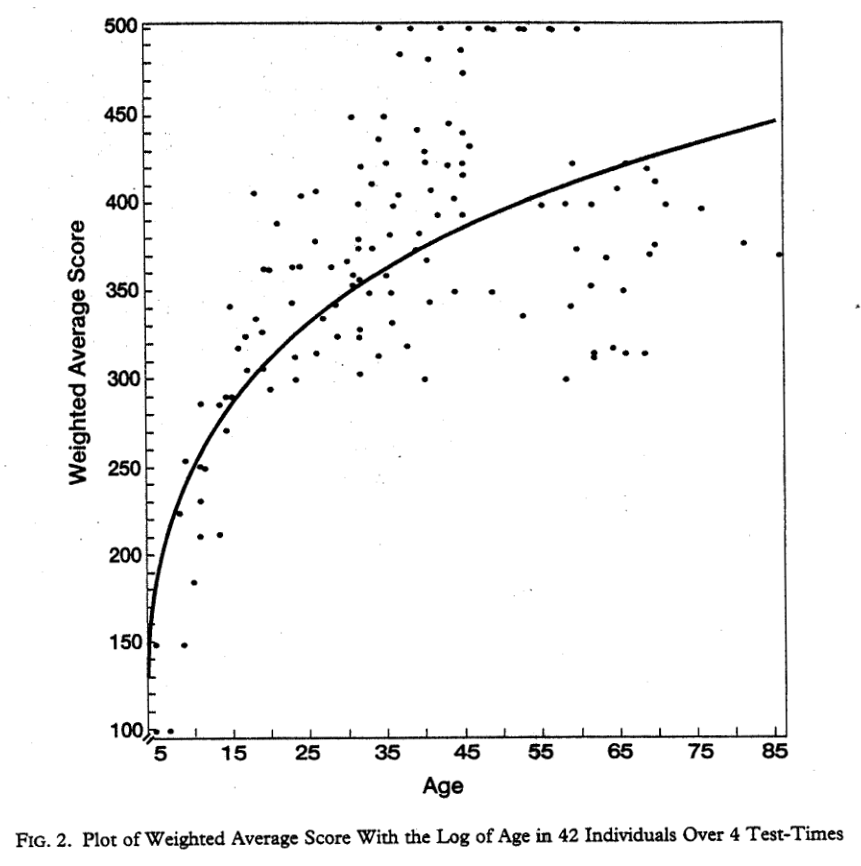 As you can see, it's not really that clear what happens in later adulthood, but it doesn't seem to be much different from early adulthood.

... moral sensitivity ... is "the ability to see an ethical dilemma, including how our actions will affect others."

Research on moral sensitivity is much more recent. Even in his early works, Piaget was aware of this effect on moral judgement task performance. In the original paradigm, very young children were asked questions like "should a child who accidentally broke 15 cups while washing the dishes be punished more than a child who accidentally broke 1 cup while stealing a cookie". Although the children were often aware that stealing a cookie is wrong and washing dishes is not, the large amount of damage caused would outweigh that due to its emotional impact on the child. By around age 8 or 9 however, children understand that the amount of harm is not a relevant factor - only the intention is.

However, later research suggested that moral sensitivity is still correlated with emotion much later in life. By adolescence, this emotional reaction no longer affects moral judgements, but it continues to impact other aspects of moral reasoning such as deserved punishment. An early attempt to measure sensitivity (2001) used the speed of word associations as an indirect indicator, and found no significant difference between the performance of younger and older adults once the age-related decrease in overall performance was taken into account.

Modern research on moral sensitivity uses fMRI to detect changes in activity in areas of the brain associated with emotion (limbic system) and moral reasoning (prefrontal cortex). This approach is relatively new, and still fairly expensive, so sample sizes tend to be small. The study cited in the question also concludes, as is well established, that:

... judgments about how wrong an action was did not differ significantly by age

but as for moral sensitivity:

... with increasing age, subjects reported feeling less upset when viewing objects being damaged ... With age, agents were rated as even more mean if they had harmed a person intentionally than if they had harmed a person accidentally ... with increasing age, participants were less willing to punish agents who intentionally damaged objects than those who intentionally harmed people ... Comparison across the three groups showed a significant difference ... between the early childhood group and the adult group in the connectivity between the vmPFC and amygdala reflecting increased functional integration between these 2 regions in adults.

It would certainly be interesting to see how these results extend to later adulthood - ie, if they continue in a linear fashion, or taper off as in moral judgement scores.

Most modern research on older adults focuses on the effects of brain damage (eg, 2006, 2010, 2010), which is naturally more common with age. When compared with same-age controls, patients with damage to the prefrontal cortex perform worse on a variety of moral judgement tasks. Degradation in brain function may be responsible for a decline in moral sensitivity with age in some cases.

Not the answer you're looking for? Browse other questions tagged cognitive-psychology reference-request moral-psychology or ask your own question.

3
How moral reasoning is measured?

5
Does not seeing sunlight for several days impair moral judgment and lower mood?
3
How moral reasoning is measured?
3
How does Kohlberg's moral reasoning work, can I measure it myself?
4
How to improve working memory in adults?