With his book "Outliers" Malcolm Gladwell has widely popularized the idea that the requirement to become an expert in any field is largely to invest at least 10.000 hours of deliberate practice.

The answer is more involved than it seems. Expertise research programmes, including Ericsson's line, has tended to blend quantitative and qualitative research methods (e.g., case studies, talk-aloud protocol, etc.), and there is a veritable host of critiques and qualifications that apply. For the scope of this answer, I will therefore try to err on the side of too restrictive than too broad.

The 10,000 hours figure, supposing that you are right to pin Malcolm's work on this article, appears to derive from an analysis of retrospective practice accounts of violinists. In any case, from the article, page 379. 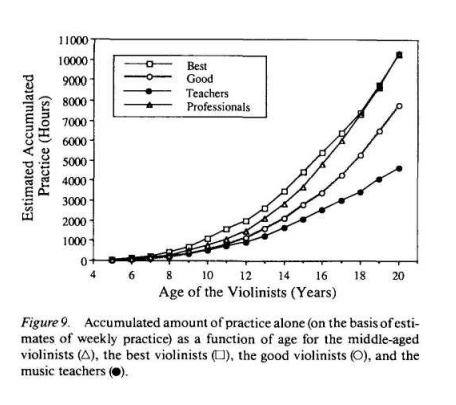 In my experience, rather than giving the 10,000 hours figure, Ericsson himself instead often proffers 10 years, as he does in the abstract of this article. This is more consistent with recent research on effects like spaced repetition and the generation effect, since using hours seems to imply that hours of deliberate practice are interchangeable and independent, which they are evidently not. I don't know if it's meaningful to give a year value, but I subjectively doubt it.

I will interpret the second question as, "What is the state of research on the training efficacy of deliberate practice?" instead of the alternative meaning about 10,000 hours, which I have argued is flashy, but not meaningful or central to expertise acquisition.

Deliberate practice has been studied and compared with traditional training and educational methods fairly extensively across a number of domains. Here, I will restrict myself to studies dated 2011-2015 which were not published by K. A. Ericsson himself. I found a convenient meta-review of 14 studies, which found deliberate practice combined with simulations to be effective for clinical training (McGaghie et al., 2011), the area in which deliberate practice sees the most use by far.

"We found that deliberate practice explained 26% of the variance in performance for games, 21% for music, 18% for sports, 4% for education, and less than 1% for professions."

For the purpose of this question, I would say this: on the one hand, the number of hours is meaningless and more likely than not to vary substantially between domains, persons and situations. The 10,000 hours figure is therefore only illustrative, not practically meaningful.

On the other hand, there is evidence to support the efficacy of deliberate practice as a learning strategy. Finally, though it remains influential, recent research suggests that deliberate practice alone is not sufficient to explain expertise acquisition, and that interacting factors need to be considered.

Despite the waning star of strong-form deliberate practice theory, I thoroughly recommend Ericsson et al.'s Cambridge Handbook of Expertise and Expert Performance (2006) for an introduction to this increasingly relevant area of psychology. Personally, I think the recent studies finding that deliberate practice doesn't seem to predict anything in some domains are absolutely fascinating, but I can only speculate as to why.

Ericsson doesn't emphasize on the precise number of hours needed to be a world-level expert. What he emphasizes is the importance of deliberate practice in gaining expertise.

4
What is the upper bound on rate of learning in young adults?

5
Does personality imply an inclination to be an expert in one field or average in "all" fields?
0
Can you make yourself like/hate something when you learned to hate/like it during early life?
3
What are the conditions of deliberate practice?
5
Can you practice and improve physical activities only by thinking?