How is brain processing different for situation-less vs. situated emotional faces?

However, it's well established that how we perceive emotional faces depends largely on context. For example, Barrett, Mesquita, & Gendron (2011) point out that Serena William's face in the first picture looks to be in pain, but in the second picture she's clearly ecstatic from victory. 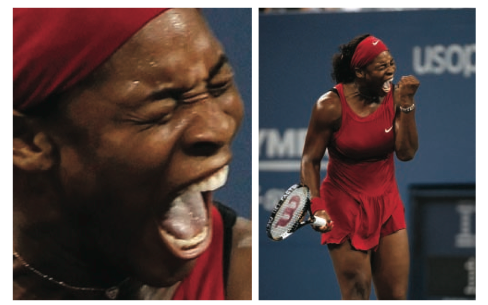 To the best of our knowledge, how does our brain differentially process (e.g., which brain regions are recruited for) the emotional faces in these two pictures?

Edit: To be clear, I'm familiar with psychological theories of emotion face processing (and why we perceive these faces differently). I'm more interested in the brain level of analysis.

Alright, it's high time I actually answer this question. Beatrice de Gelder and crew published two papers that examined this with fMRI (here) and EEG (here).

In the fMRI study, they presented participants with emotional faces against threatening and neutral backgrounds, with various controls (a triangle, a scrambled background). 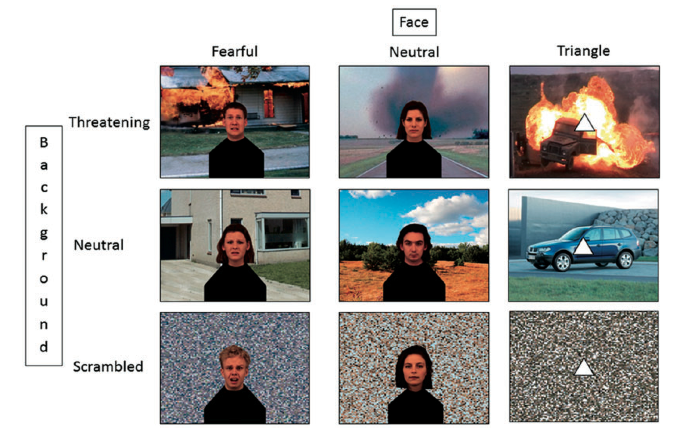 The results are kind of complex and lengthy, so I'll quote the authors' summary:

[W]e found no evidence of brain areas responding more to faces in a threatening background than to faces in a neutral background […]. On the other hand, the sgACC and right anterior PPA responded more to neutral than to threatening backgrounds surrounding faces […]. Additionally, the results show that while similar background effects also obtain on bodies in the right anterior PPA, the effect in sgACC is face-specific and furthermore correlates with empathic ability: higher empathy scores are related to smaller background effects on faces.

They suggest that activation of the sgACC represents mentalizing processes. Faces in a neutral background might make participants attribute certain thoughts to the figures ("What is he thinking?"). On the other hand, faces against a threatening background might elicit "orienting responses" (e.g., "What is going on?").

The right anterior PPA is involved in topographic processing, which may be inhibited by the presence of a face. Inhibition may be greater for threatening vs. neutral scenes.

The left FG was also active, which may be involved in "processing the affective face-context congruency."

The goal of the EEG study was to examine the temporal dynamics of perceiving discrete emotions against complex, affective scenes.

Again, the results are relatively complex, so I'll quote the abstract:

Above (the yellow part) you can see how emotions are not represented continuously in the brain across time and how the type of emotion being processed may be differentiable.

They also attempted to localize the temporal activity in the brain, and they found widely distributed activity for fear (mostly RH), disgust (mostly RH), and happiness (mostly LH), and more limited activation for sadness. For example, see the results for fear>neutral localization below:

However, no brain area was unique to the perception of a specific emotion. Instead, there was lots of overlapping brain activity (which supports a constructionist approach to emotions).

Overall, I'm not sure either of these studies satisfactorily elucidate how we perceive emotional faces in different scenes, but they're a great start.