Which area of the brain was first correctly associated with a specific function?

I have read on this website that Broca's area was the first area of the brain to be associated correctly with a specific function, in that case language. But I couldn't find any other source for the statement, so I wonder if this statement is true. Any idea?

Broca is generally considered the first person to localise structure to function, however, there are some earlier individuals to consider:

EDIT: i recommend the chapter Neurolinguistics from the Middle Ages to the Pre-Modern Era: Historical Vignettes in: Stemmer, B. & Whittaker, H.A. (1998). Handbook of Neurolinguistics. Academic Press: London.

it has a very thorough look at this topic as it relates to language localisation and cites a number of case studies published well before broca. there are some departures from what i have written below and whittaker seems to give more significance to bouillaud's work. of note, bouillaud identified the significance of the double-dissociation paradigm in demonstrating the localisation of function:

Bouillaud claims first to be able to demonstrate that speech movements may be compromised separately from limb movements and second to demonstrate which part of the hemispheres is involved in the control of speech movements. To prove his first claim he states that two actions are functionally separate if they can be disrupted in isolation from each other, which is evident for three cases in which a severe speech disorder was not accompanied by any impairment of limb movement or by any defect of nonspeech tongue movements. Thus, speech has its own motor control center.

wittaker notes that broca wasn't the first to localise language to the frontal lobe, but the political and scientific climate was such that he was essentially credited for this. in 1859, for example, he had founded the French Anthropological Society, which by the early 1860s had already commenced debating the cerebral localisation of mental functions.

Known as the father of phrenology. Most will generally mock gall for this theory, but you need to appreciate his ideas in context: he was the first to propose that the brain is the organ of an individual's faculties, tendencies and feelings. Of relevance to relating structure to function:

Gall did not study patients with acquired loss of speech but instead, studied the bumps and protrusions on the skill of highly musical persons... Gall localised the music faculty (Tonsinn) in a specific location of the brain, which was in close proximity to the area for language.

Another alternative. In 1825 he wrote: 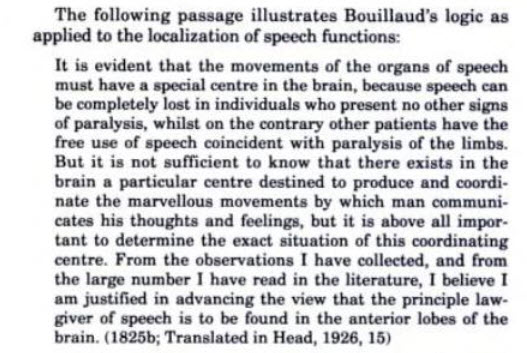 Finger, S. (2001). Origins of Neuroscience: A History of Explorations Into Brain Function.

But perhaps the most compelling of the three is flourens:

... in 1825 Flourens carried out localised lesions of the brain in living pigeons and rabbits, observing the effects on motricity, sensility and behaviour. These experiences demonstrated convincingly for the first time that the main division of the brain were indeed responsible for largely different functions. When the cerebral hemispheres were removed, for example, all perceptions, motricity, and judgement ended. When the cerebellum was removed, the animal's equilibrium and motor coordination suffered. When the brainsteam was removed, the result was death. Thus [he] concluded that the cerebral hemispheres are responsible for higher cognitive functions, the cerebellum for regulating and integrating movements, and the medulla for vital functions, such as circulation, respiration and general bodily stability.

Eiss, H. (2014). Insanity and Genius: Masks of Madness and the Mapping of Meaning and Value.

Phineas Gage had his famous spike through the head in 1848, which lead to some discoveries about the function of that area, but these were quite general. See:

But, Broca appears to be the first to identify a specific area:

In 1861, the French surgeon, Pierre Paul Broca, described two patients who had lost the ability to speak after injury to the posterior inferior frontal gyrus of the brain.

for the record, and as confirmation of what the above answers affirm regarding ancient times here is the abstract from a fairly recent historical review of the subject:

Fragments of neurology can be found in the oldest medical writings in antiquity. Recognizable cerebral localization is seen in Egyptian medical papyri. Most notably, the Edwin Smith papyrus describes hemiplegia after a head injury. Similar echoes can be seen in Homer, the Bible, and the pre-Hippocratic writer Alcmaeon of Croton. While Biblical writers thought that the heart was the seat of the soul, Hippocratic writers located it in the head. Alexandrian anatomists described the nerves, and Galen developed the ventricular theory of cognition whereby mental functions are classified and localized in one of the cerebral ventricles. Medieval scholars, including the early Church Fathers, modified Galenic ventricular theory so as to make it a dynamic model of cognition. Physicians in antiquity subdivided the brain into separate areas and attributed to them different functions, a phenomenon that connects them with modern neurologists.

F.Clifford Rose - Journal of the History of the Neurosciences: Basic and Clinical Perspectives Volume 18, Issue 3, 2009

Not the answer you're looking for? Browse other questions tagged reference-request neurology neuroanatomy history-of-psychology or ask your own question.

18
Does the fusiform face area in patients with Prosopagnosia (face blindness) show lower activity under an fMRI?
7
What is a source of case studies of personality disorders?
8
What is the sleep study that showed that a percentage of humans have a biological clock that is ~28 hours or greater?
3
What was the quantified brain volume of Albert Einstein?
3
Does the brain stop processing data when the eyes move?
7
How does it come about that specific areas of the brain are associated with specific functions?
1
Why is Wernike's area of the brain called Wernike's area?
8
Is there any evidence that language is the limit of the world?
3
Are there detectable differences in brain activity when thinking about people of different degrees of closeness?
6
Are scintillating scotomas really caused by cortical spreading depression? If so, how is this known to be true?