How to measure precision in classical test theory framework?

Also, to what extent is precision of measurement in IRT theory similar to or different from absolute agreement in score (as opposed to inter-rater reliability or test reliability as measured by alpha) in CTT?

Most accounts of classical test theory do not have a notion of precision as such, but occasionally, reliability may be called precision instead. The relationship is probably most concisely illustrated with the standard dartboards. This is also explained on the Wikipedia Item Response Theory page, but as you can see, in CTT, precision is to reliability what accuracy is to validity. 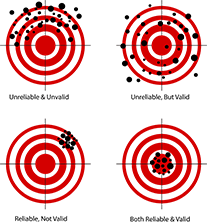 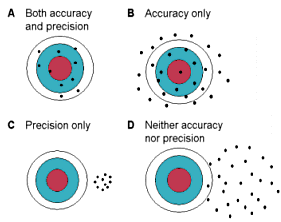 Cronbach (1951) suggested Coombs (1950) as the origin of the reliability/precision confusion.

I'm not entirely sure if I'm interpreting the secondary question right, but IRT precision is a measure of precision under IRT, and ICC is a measure of reliability under CTT. The main difference is that CTT expresses reliability as a single value, while IRT expresses precision for different values of the underlying trait. This isn't specific to absolute agreement, though, so maybe I'm misunderstanding.

Not the answer you're looking for? Browse other questions tagged measurement methodology test statistics reliability or ask your own question.

7
How to efficiently get a sense of the meaning of a score on a non-aptitude test that you encounter in a journal article?
2
How many items do I need to design a measure?
7
Is there any standardized test / questionnaire to measure frustration?
6
Standardised test to measure workplace stress
1
How to generate ipsative scores from a test with normative Likert-type items?
0
How can I take the Token Test?
4
Classical test theory: Covariance of two variables