Does the retina encode visual information like a Bitmap or an SVG?

I heard recently that a scientist has developed a retina prosthesis. So I think this is a question that has an answer.

Does the retina encode information like a Bitmap image or an SVG image?

(A Bitmap is a grid of pixels. An SVG image is vector based, so that it defines a shape and says 'in this region, it's green, in that it's red', so to speak.)

Short answer
The retinal image corresponds more to a bitmap, than a vector-based image

Background
The retina contains a layer of about 100 million photoreceptors that are topographically organized. In other words, each photoreceptor codes one specific pixel in the field of view. In turn, the nerve fibers running from the eye to the brain are also topographically organized in the same way the retina is (retinotopy is maintained up until the higher brain centers and is lost only in the inferotemporal cortex). Hence, yes, basically, but grossly oversimplified I agree with @Krysta that the retinal image more closely corresponds to a bitmap than a vector-based image. Nonetheless, colors, contrasts and edges are coded in the retina.

Here is a picture on retinotopy. Basically a 1:1 topographic representation of the retina can be found in the primary visual visual cortex: 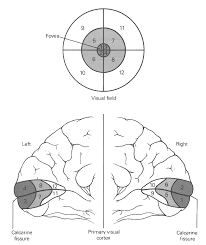 source: University of Leeds and Sydney

Retinal implants are devices that replace the lost photoreceptors in the retina in patients with retinitis pigmentosa or other retinal degenerative diseases. Retinal implants typically consist of a grid of electrodes (60 - about 1500 in commercially available systems) that are placed on (Argus II) or below the retina (alpha-IMS).

Here's a fundus photo of an Argus II implant: 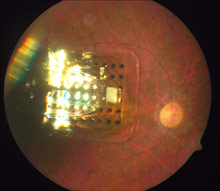 The electrodes directly stimulate the surviving neruonal cells in the retina. Retinal implants make use of the retinotopy. An electrode in the center of the retina will elicit a spot of light (a phosphene) in the central fielfd of view, whereas a more peripherally situated electrode will generate phosphenes more eccentrically. Hence, camera images (in the Argus II device) are simply downsampled and projected onto the electrode grid as intensity-coded stimuli. In the alpha-IMS system the intra-ocular part consists of a grid of photosensitive diodes coupled to small amplifiers. Hence, in this device it is, quite literally, a photosensitive chip thrown on the retina. In both approaches, brighter areas in the image receive higher electric currents and result in brighter and/or larger percepts.

Caveat: I know very little about the structure of digital images.

Assuming you mean the biological retina and not the prosthetic one, the Wikipedia page on color opponent process is quite good; basically, the four receptor types respond maximally to different wavelengths, and the ranges overlap slightly, so the visual cortex does the differences between the activation levels to get a complex representation of color.

In terms of where in the visual field (pixels vs "shapes"), again, retinal ganglion cells have what is called a receptive field--they respond maximally to stuff in the middle and less so to stuff on the periphery (whether "stuff" is light or shadow depends on their exact type). So although the spatial definition of a "pixel" is a bit more complicated in the retina than in a bitmap, and simplifying grossly. . . it's more like a bitmap, I think. There's no edge processing or shape definition at the retinal level--there's no "processing" at all in the retina, just transmission--so vector-type processing doesn't happen until visual cortex.

8
Is the concept of neuroplasticity applicable to visual cortex and how does it affect visual perception?
4
Does transparency have its own visual channel?
8
What is the meaning of "little efferent input" to retina?
7
How does the brain break down visual information for processing? What "channels" is visual input broken into?
2
Does the retina contribute in distinguishing lines and borders?
2
What is the relation of visual quality and distance from the central field of view?
4
How does the brain structure 3D visual data?
9
How does the inner ear encode sound intensity?
9
What does the visual feed from the retina look like before it is processed by the visual cortex?
4
Does the peripheral nervous system processes information like central neurons do?