What did Jung's patient find out?

I'm reading Dreams by Carl Jung, and I couldn't understand a specific paragraph. Maybe I'm missing something so obvious that he didn't bother to write. It is the entry numbered 542: 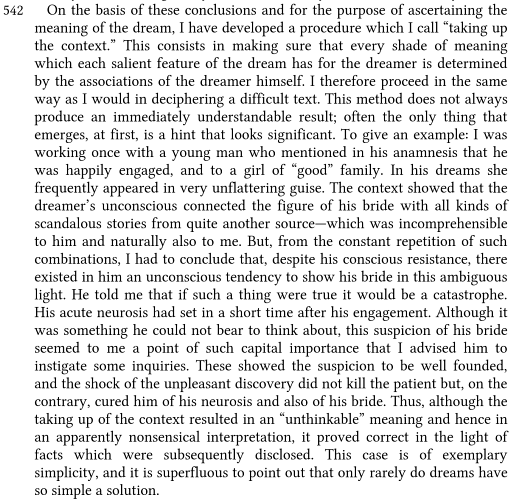 What did the patient find out about his fiancee, i.e. what suspicion was "well founded" ?

Here is the plain text :

On the basis of these conclusions and for the purpose of ascertaining the meaning of the dream. I have developed a procedure which I call “taking up the context.” This consists in making sure that every shade of meaning which each salient feature of the dream has for the dreamer is determined by the associations of the dreamer himself. I therefore proceed in the same way as I would in deciphering a difficult text. This method does not always produce an immediately understandable result; often the only thing that emerges, at first, is a hint that looks significant. To give an example: I was working once with a young man who mentioned in his anamnesis that he was happily engaged, and to a girl of "good" family. In his dreams she frequently appeared in very unflattering guise. The context showed that the dreamer’s unconscious connected the figure of his bride with all kinds of scandalous stories from quite another source-which was incomprehensible to him and naturally also to me. But, from the constant repetition of such combinations, I had to conclude that, despite his conscious resistance, there existed in him an unconscious tendency to show his bride in this ambiguous light. He told me that if such a thing were true it would be a catastrophe. His acute neurosis had set in a short time after his engagement. Although it was something he could not bear to think about, this suspicion of his bride seemed to me a point of such capital importance that I advised him to instigate some inquiries. These showed the suspicion to be well founded. and the shock of the unpleasant discovery did not kill the patient but, on the contrary, cured him of his neurosis and also of his bride. Thus, although the taking up of the context resulted in an “unthinkable" meaning and hence in an apparently nonsensical interpretation. it proved correct in the light of facts which were subsequently disclosed. This case is of exemplary simplicity, and it is superfluous to point out that only rarely do dreams have so simple a solution.

Jung does not tell us what his patient found.

He circumscribes the woman as appearing "in very unflattering guise" and "connected [...] with all kinds of scandalous stories". What kind of unfavourable scandal she was finally discovered to be involved in, Jung does not disclose. We can imagine anything from premarital sex to secretly working as a prostitute. What Jung's patient at the time of Jung's writing might have considered "scandalous" could well be seen as completely innocent and commonplace nowadays (e.g. premarital sex). Times change.

But the important aspect of this section is not what the woman did, but that the patient unconsciously had come to an insight that his conscious mind had not yet made, and that his unconscious informed him of this insight in his dreams.

Not the answer you're looking for? Browse other questions tagged dreams reading jung or ask your own question.

43
What is the current "accepted" science behind dream interpretation?
5
Dreams and sleep phases, and duration of dreams
11
Does data support Domhoff's neurocognitive theory of dreams?
8
What brain regions are activated when a dream is remembered?
4
The mathematics of dreams, or better, the dreaming of mathematics
6
When are dreams created?
0
What happened in the fifth year of the girl that made her afraid of her father in the book "The Theory of Psychoanalysis"?