Why is sensory substitution not that successful?

By successful, I mean made it out to the large world market or being massively funded. After looking online it seems that the most relevant research is the one done by Bach-y-Rita about the seeing with tongue in the 70's. Since then there were no significant breakthroughs. Is there a reason for that? Did someone prove that brain plasticity is limited?

Bach-y-Rita developed various devices, but his most cited one consisted of 400 vibrotactile solenoids mounted in the back of a dental chair. Camera images were converted into binary ("black and white") tactile representations onto the back of a subject ('seeing with the 'skin') (Bach-y-Rita 1969): 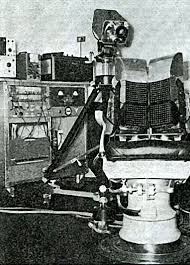 The results obtained with the TVSS were very promising: after sufficient practice (20 – 150 hours), blind subjects were able to perceive movement, recognize shapes and objects, and even identify faces. It also enabled the appreciation of more abstract concepts quite unfamiliar to the blind, such as shadow, depth, looming, zooming and parallax (Bach-y-Rita, 2003). A face projected onto the skin would have felt like something like this (photo of an oscilloscope image representing the voltage stimuli sent from the camera to the vibrotactile display). 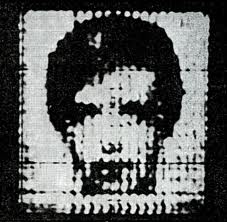 However, as the first figure shows, the TVSS was large and bulky. Moreover, it was noisy and power hungry and simply not very useful outside the laboratory. Although various portable variants were constructed, they too suffered these limitations in various degrees: 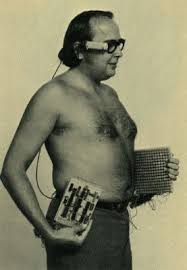 Bach-y-Rita's work has been extended into electrotactile approaches and the company Wicab is currently marketing the BrainPort V100 device in Europe. It features a head-worn camera to scan the environment and translates these images onto a grid of electrodes that stimulate the tongue to elicit electrotactile sensations (much like a sip of champagne or a soda would do): 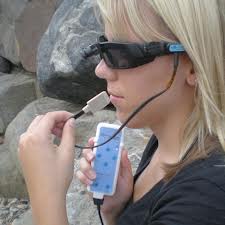 It uses electrodes instead of bulky vibrotactors which greatly reduces power consumption and this approach has made a portable application feasible. Electrodes, however, need a moist surface or very high voltages are necessary. A straightforward approach was to apply the electrode grid onto the tongue. The tongue is moist and has excellent resolution. The BrainPort currently features 400 electrodes and is able to provide graded voltages to present gray scale images onto the tongue.

The BrainPort has been marketed fairly recently in Europe (2013) and an FDA study in the US has just been finished. As far as I know they are busy with commercializing there as well.

Regarding your brain plasticity question: There is a wealth of information available on neuroplastic changes in the brain due to the use of the BrainPort or other sensory substitution approaches (VoiCE, EyeMusic etc etc). Basically it has been shown that the deafferented visual cortices are recruited for tactile information processing (e.g. Sadato, 2002), and hence, the brain actively adapts to the new source of information. So no, plastic changes are not the limiting factor.

Chris gave an excellent answer for visual-to-tactile sensory substitution devices. I will not argue about the extent to which sensory substitution is successful, but the most widespread sensory substitution system for the blind is nowadays The vOICe, a class of visual-to-auditory sensory substitution devices that is available globally. Its Android version has been installed over a quarter million times in the last few years, and there are a number of recent peer-reviewed scientific publications based on use of its Microsoft Windows version, covering various aspects of brain plasticity. Upcoming augmented reality glasses are likely to improve convenience of use. But yes, like Chris stated, learning to use a SSD effectively takes a lot of time.

Tadoma is a method of communicating used by some deaf blind individuals. The system was developed prior to 1967 and predates TVSS, although there is no hardware involved. I think this video demonstrates the extent to which the approach is successful, and hence not limited by brain plasticity. Tadoma has fallen out of favor because it is difficult to learn and teach. There has been some research into vibrotactile hearing aids and there are some commercially available.

Not the answer you're looking for? Browse other questions tagged neuroscience perception vision sensation plasticity or ask your own question.

5
Why is it so difficult to use a “true mirror” as a mirror
7
Is it conceivable to transmit all sound information in the tactile modality?

11
Sensory Immersion Research?
12
Neurotransmitter based imaging techniques
4
Sensory dissonance: Will the visual or auditory channel win?
5
Why does optogenetics not mean that perfect brain-computer interfaces are possible?
8
Predictive Experiments on Neuroscience of Free Will
4
are serotonin levels higher or lower in dominant vs. non-dominant primates and humans?