See this question in User Experience. Farwell and Donchin (1988) described a P300 based BCI selecting letters by detecting P300 responding to the flashing letters. According to this system, only one target can be detected each time, thus only one flashing group. If we use word prediction keyboard in this system, once a letter is selected, the predicted words will appear on the screen. If next letter and the predicted words flash at the same time, the system is not able to tell which to select. What's the best way to integrate word prediction keyboard into this system? two ideas below:

However, both might slow down the spelling process if subjects only need words with 3 or fewer letters. Any other ideas? 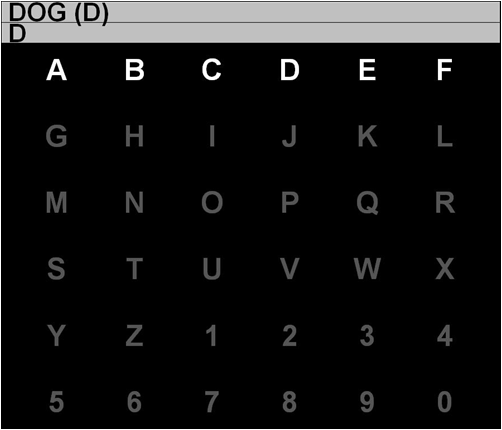 Fig. 1. An example from the Brain-Computer Interface Laboratory at East Tennessee State University [To spell the word "DOG", as rows and columns flash successively, the user has to count how many times the letter 'D' (the target) flashes. This results in a P300 response being generated each time the row or column containing the target flashes. The twelve-flash series is repeated a predetermined number of times. The responses for each row and column are averaged, and a classifier is applied to determine how closely each averaged response resembles the P300. The intersection of the row and column with the highest classification values is selected. In this case, the row and column containing the target letter 'D' would be selected, and a "D" would be presented as feedback to the user on the line below the presented word "DOG" at the top of the matrix.]

Browse other questions tagged hci brain-computer-interface p300 or ask your own question.

6
Is it sufficient to say self control eliciting the reduced ERN (error-related negativity) in cognitive control tasks?

4
Any research on right-hand/left-hand based preferences when interacting with an interface?
6
How to design ballot papers with a large number of candidates in a preferential system?
4
Brain-computer interface with EEG: how to name imaginary movement of a non-self object?
3
How much our visual limitations are instrument(eye)-based, and how much are they brain-based?
3
How do I find Computer Science-Focused Cognitive Science Labs for Research?