I'm currently setting up and experiment that utilises a visual search task that contains a circular array of target letters and a distractor that falls outside the circle.

Obviously the further away from the fovea the distractor moves the more difficult it is to see.

Can anyone point me to some literature as to how one would go about scaling the size of the distractor relative to the target letters to maintain comparable levels of acuity.

Most of the literature I've read doing similar experiments make the distractor bigger for this very reason. |But I'm having a hard time figuring how how one goes about deciding how much bigger the distractor should be.

Visual acuity is highest in the foveal region, namely around 1/60 of a degree, or 1 minute of arc (1 MAR). At about 30 degrees of eccentricity, visual acuity is reduced to anywhere between 1.5 and 10 MAR when determined by a shape recognition task, as shown in Fig. 1 taken from Lie, 1980: 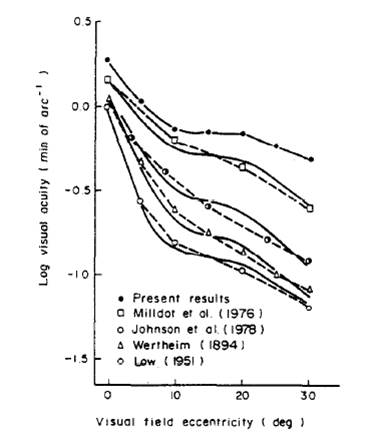 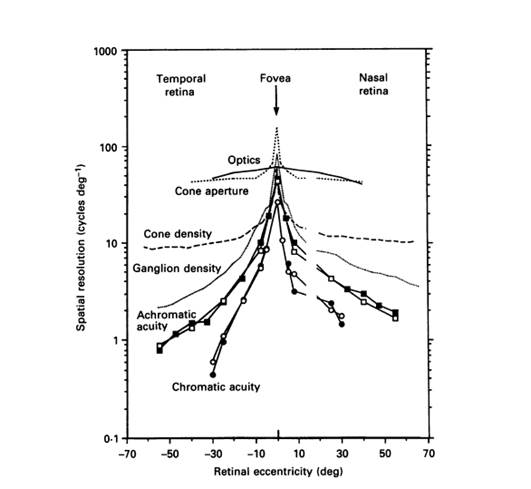 The Lie, 1980 study mentions several references and the Anderson, 1991 study is definitely worth checking out as well.

To get back to your scaling question: it is difficult to directly translate these findings into scaling factors for your stimuli as you make no mention of their approximate size, or their eccentricities. What the figures do show, however, is that people may not be able to see much detail in their periphery and that acuity may drop as much as 150x at an eccentricity of 30 degrees. It also shows that black-and-white stimuli may be better visible in the far periphery and also, quite interestingly, that acuities deteriorate at a faster rate with eccentricity in the temporal retina.

Not the answer you're looking for? Browse other questions tagged neuroscience experimental-psychology vision or ask your own question.

4
What is the metabolic load of the visual system?
7
How fast is the visual system?
6
Do we have a predisposition to view visual stimuli in a clockwise pattern?
8
Is there a hierarchy of gestalt visual stimuli processing?
5
How common is it for twins conjoined at the head to share thoughts and visual stimuli?
2
What is the relation of visual quality and distance from the central field of view?
4
What is the relationship between visual attention network and visual stream (Two-streams hypothesis)?
5
What do you call sensations without stimuli?
2
Differences in reaction time on visual tasks with and without binocular disparity ques?