What is the difference between pre-synaptic versus post-synaptic?

As a non-specialist, I am unclear as to the exact meaning of the terms pre-synaptic and post-synaptic.

Specifically, do they refer to

I ask this because the terms are often used in ways that do not make it clear which meaning is the one intended.

Typically 'presynaptic' and 'postsynaptic' are used to indicate two neurons that are connected, as you indicate correctly in your second example. Information flow in the nervous system basically goes one way. If one neuron fires (presynaptic cell) it can chemically activate another cell on which it synapses (the postsynaptic cell), as shown in the following figure 1. 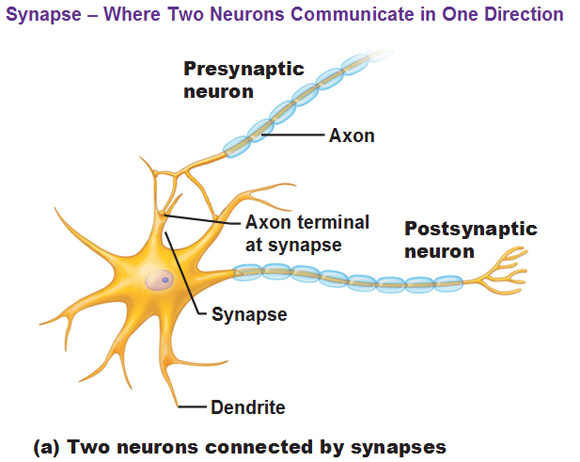 As an illustrative example consider the auditory system (figure 2). 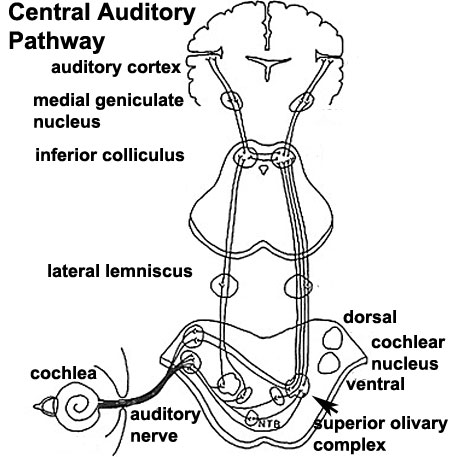 However, to continue with the peripheral auditory system as example, the auditory nerve cells receive their input peripherally from hair cells in the inner ear, while the cochlear nucleus cells send their output centrally to the olivary complex. Hence, auditory nerve cells can also be classified as postsynaptic, while cochlear nucleus cells are also presynaptic. Again, as illustrated by this auditory-system-based example, it all depends on the context and the specific system under investigation.

The terminology can, however, point to a single cell as well. In the hypothetical scenario a neuron would send a collateral axon to its own cell body, it would be the presynaptical as well as postsynaptical cell. In the figure, the axon on top of the image (still correctly labeled as presynaptic) would then come from the neuron shown on the bottom of the image (still labelled correctly as being postsynaptic).

From my undergraduate biology degree, I am only familiar with the second use of the terms which you describe.

That is, the terms pre-synaptic and post-synaptic describe a spatial relationship to the synapse, which has directionality, as you know. If the terms are used to describe whole cells, as AliceD covers, and as people often do when describing a neural pathway; then for clarity the relevant synapse should be named. This is because many neurons both receive input and give output at different synapses.

The first use that you suggest is unfamiliar to me, I have not heard this usage. This meaning could perhaps be better understood from the terms "pre- or post-transmission" or "pre- or post-synaptic event", but I am not sure how useful these terms are (I will explain why:)

There are some structures of the synapse for which it might be useful to think about states before and after a single synaptic event: the ion channels and population of neurotransmitter vesicles of the axon terminus, and the ion channels of the post-synaptic bulb.

The whole system present at the synapse is dynamic, however, and I believe new action potentials can arrive at the synapse more frequently than the time it takes for the synapse to recover - hence there is really a heterogeneous population of states with time rather than two clear ones. A single isolated transmission event can be used as a thought-experiment for understanding the molecular biology, which is why textbooks teach the series of events of synaptic transmission.

I could argue that synaptic transmission refers to the entire event including recovery - and so there is no meaningful difference between synapses before and after transmission. Exceptions to this might be Long-Term Potentiation/Depression, but they are conditional on more activity than just a single action potential.

As far as I know, "pre-/post-synaptic" are not used to refer to states of the synapse, in time. My view is that there is no such useful distinction between a pre- and post-event synapse.

The synapse in neurobiology is a structure, with direction - hence pre- and post- have spatial meaning. The event of transmission ought not to be called "synapse", I feel this brings confusion.

12
Neurotransmitter based imaging techniques
3
Why does a higher post-synaptic cell resistance lead to a higher voltage change when current is applied?
3
What is the difference between principal neurons and pyramidal cells?
4
Integrated Information Theory - If correct could humans create artificial consciousness?
3
Understanding the 'Wiring Catastrophe'
1
Meaning of "projection" and "to project" in neuroscience
3
What is actually happening with neuron during refractory period?
6
Are there synapses on other neuron terminals in human brain like in Aplysia
1
Is there a mechanical/vibrational communication method between pre- and post-synaptic terminals in addition to chemical and electrical synapses?
2
What is the difference between recurrent and feedback synapses?