Which is the shortest duration for a pitch difference in audio signals to be perceived by the human auditory system?

If I have two short audio signals, for example pure tone C4 and C#4, so half-tone difference, how short can they be that the human can hear the difference in pitch? Was there any blind-experiment/research with a good set of subjects done about this?

I was causally testing with a short script and it seems I am able to distinguish down to 30 ms long samples if I play one sample, then one second of pause, and another half tone higher sample.

I can also do it for shorter, but I am not sure anymore if I really hear it, or if I just imagine hearing the difference.

It really depends on what you mean by difference in pitch. Subjects can discriminate differences in frequency for very short tones, but it does not mean they are being perceived as pitch differences. The classic paper in this area is Moore (1973): 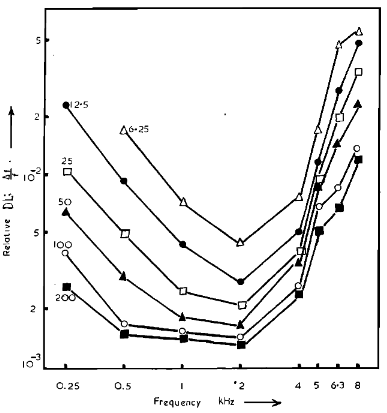 As the duration is reduced from 200 ms to 6.25 ms, performance falls off, especially for low frequency tones. It is worth noting that creating extermely short sounds with narrow bandwidths is difficult. With a 12.5 ms duration, subjects can still discriminate between tones with frequencies of 250 Hz and 255.7 Hz (a Delta f of 5.7 Hz and a (Delta f)/f of 0.023).

In regards to your "bonus question", when the stimulus consists of two tones, things get very complicated. Judgements like can you hear both tones are very different from can you hear the difference between a single tone and the pair of tones.

I used 5 ms long tone bursts in an experiment where people had to discriminate between a 1000 Hz and a 1200 Hz pure tone (or rather, click). They could generally do this very well, if I remember correctly accuracy was above 90%.

I then had a different paradigm which was a bit more difficult in terms of the task, and I had to increase the tones to 20 ms for similar accuracy. So I would guess that 30 ms should be plenty, if your sound equipment is reasonably good.

The absolute minimum duration of tone bursts is limited by mathematical (physical) limitations and more importantly, your hardware.

Mathematically, the minimum duration will depend on the frequency, as one period is the minimum time necessary to mathematically define a particular frequency. For example, to complete one period of a 100 Hz tone, at least 10 ms is needed. For a 10 kHz tone 0.1 ms is enough.

Regarding the hardware limitations - presenting a short tone burst may result in frequency splatter. This phenomenon is hardware-dependent and even the most expensive speaker systems are subject to this effect. Basically it's the result of the generation of unwanted frequencies due to the onset and offset of the tone burst. The splatter can be reduced by using onset and offset ramps. Onset and offset ramps are used in order to gradually increase and decrease the power of the signal at the start and end of the tone burst, respectively. Exactly how long these ramps have to be depends on the hardware used. As a rule of thumb, onset and offset ramp times of 2 periods can be used with a plateau phase of at least 2 periods in-between. This adds up to a total of 6 periods. A 500 Hz tone burst, then, would need at least 6*2 ms = 12 ms.

At relatively high frequencies (say 1 kHz and above) this rule of thumb may not apply as periods become very short. At higher frequencies, therefore, the answer by @Strongbad will give a good indication of the lower duration limit. However, keep in mind that introducing onset and offset ramps is always a good idea, even at long stimuli (say 100 ms) since frequency splatter always contaminates the signal.

20
Does self-directed speech help or hurt a blind subject's auditory recognition?
8
Advantage of active learning on classification tasks
4
Is the Raspberry Pi capable of operating as a stimulus presentation system for experiments?
7
Increasing pitch perception of the same auditory stimuli
5
What are the temporal limits of the auditory system?
2
Is it possible to condition oneself to not be bothered by distressing sounds?
3
Is Tinnitus caused by damage to the dorsal cochlear nucleus (DCN) or Auditory Cortex, which can be repaired?