Can you catch up on sleep over the weekend?

The lack of sleep has many negative effects associated with it. Maintained sleep deprivation results in a degraded performance over time (in this case reaction time).

There is evidence that 'recovery sleep' is different from ordinary sleep. Carskadon and Dement (2005) measured a sleep pattern that favors Slow Wave Sleep (SWS) after 38 hours without sleep. Personally I also experience it takes me longer to wake up after being sleep deprived, which makes me believe at least your body is trying to make up for something.

Reduced time in bed is associated with deficiency of the neuronal process associated with change detection, which may recover after one week of sleep extension, whereas attention-dependent neural processes do not normalize after this period of time in habitually short sleeping individuals and may require longer recovery periods.

It gives an indication recovery of some symptoms is possible, but recovery time is not equal for all symptoms. However, the participants in this study seem to be habitual short sleepers.

I am wondering whether it is possible to recover from the lost hours over the week during the weekend entirely. E.g. if you lost 8 hours, by sleeping 8 hours more during the weekend. The notion of sleep dept still seems to be up for debate, but perhaps there is more certainty on short term (1 week) effects?

Well, to be able to answer your question affirmatively, we'd have to know all the effects of sleep deprivation, including the long term ones, and those are still are not fully accounted for.

However I did find some more recent research that addresses the question of weekend sleep recover on some parameters. Pejovic et al. found (quoting from the abstract):

The good news is that on most measures there was recovery after the weekend, and this is consistent with other studies e.g. with that by Faraut on hormonal measures. I still find their performance finding rather shocking, so it's perhaps worth taking note at exactly what performance they looked at; it was basically just the PVT: 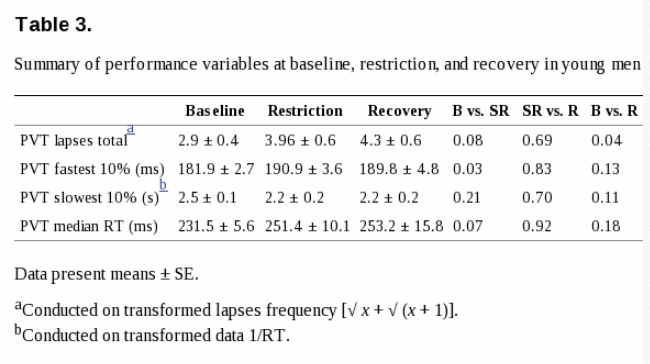 It's indeed a good question how many more nights of leisurely sleep would cause PVT to recover. I strongly doubt the impairment is permanent. Alas the study by Pejovic et al. didn't have any follow-up after the weekend.

A similar study was conducted prior by Banks et al., and they made a prediction on PVT recovery, but it still hasn't been confirmed

Neurobehavioral deficits induced by 5 nights of sleep restricted to 4 h improved monotonically as acute recovery sleep dose increased, but some deficits remained after 10 h TIB [time in bed -- my note] for recovery. Complete recovery from such sleep restriction may require a longer sleep period during 1 night, and/or multiple nights of recovery sleep. [...]

PVT fastest reaction times were projected to require a sleep dose of more than 13 h TIB (11 h TST [total sleep time -- my note]) to intersect the control condition. However, the confidence intervals for intersection with control group levels were large for all outcomes presented

I found one more recent animal study on the matter, by Deurveilher et al., which used a rat version of PVT, with rather different results

A 28-h period of the 3/1 chronic sleep restriction (CSR) protocol [sleep reduced to ~60% of normal as result of this protocol -- my note] disrupted performance on a sustained attention task in rats, as sleep deprivation does in humans. Performance improved after longer [one week -- my note] periods of CSR, suggesting allostatic adaptation, contrary to some reports of progressive deterioration in psychomotor vigilance task performance during CSR in humans. However, as observed in humans, there were individual differences among rats in the vulnerability of their attention performance to CSR.

Below are the graphs from the paper on the week-long CSR, which shows the remarkable allostatic adaptation on PVT, but not on weight loss. 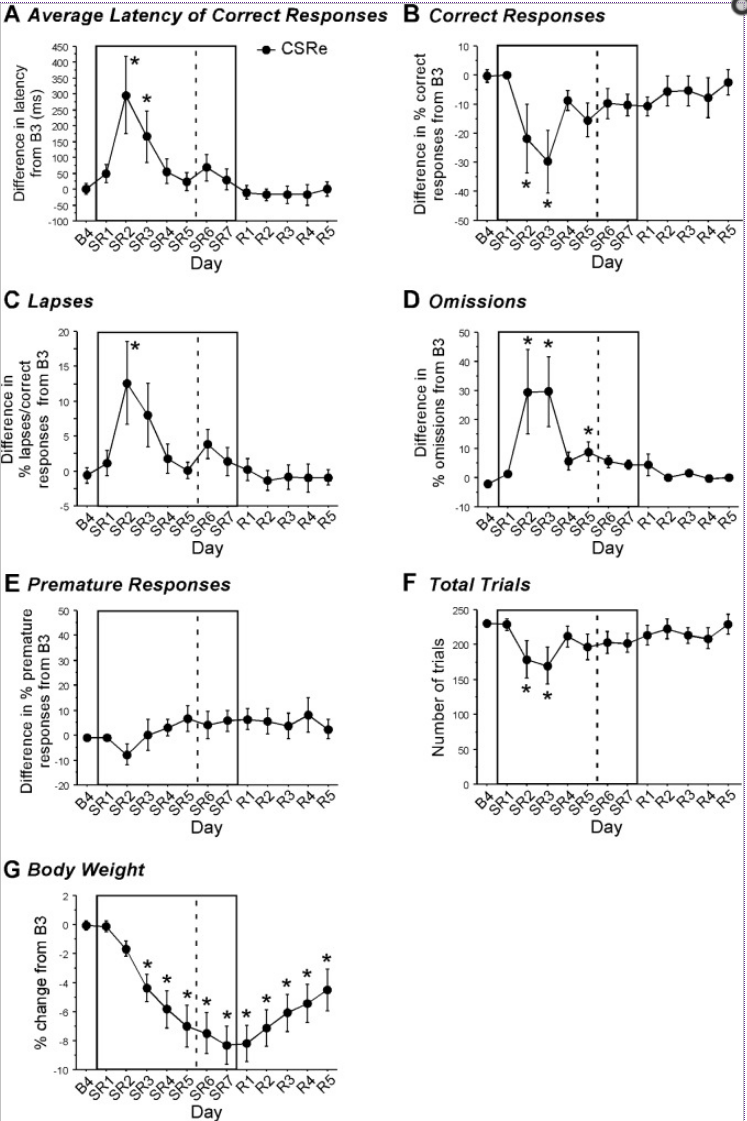 I've also consulted the 6th edition (2017) of Principles and Practice of Sleep Medicine; its chapter on sleep deprivation (and recovery) has among its authors two of the co-authors (the lead and the PI--Dinges) of the Banks study I already mentioned. So its conclusion are somewhat similar.

Few studies have examined recovery sleep after periods of sleep restriction. [...] Although participants felt that their functioning was restored, with subjective reports of sleepiness and performance recovering to baseline, subjective measures do not appear to accurately parallel objective measures of neurobehavioral recovery. These findings suggest that more than 2 or 3 nights of extended sleep may be needed to return neurobehavioral functions to baseline levels. [...] Overall, work to date suggests that complete recovery from a period of sleep restriction may necessitate a sleep opportunity of more than 10 hours or more than 3 days if sleep is restricted to 8 hours a night. In addition, different aspects of performance and neurobehavioral function appear to recover at different rates, with different trajectories.

That combination finding is additional based one other study they highlight, by Rupp et al., which did look at longer recovery periods; the summary from the book

Rupp et al extended the recovery period to five 8-hour sleep opportunities, following a week of sleep restricted to 3 hours of time in bed each night. Despite the extra recovery nights, performance still failed to return to baseline levels. In a second group that extended their sleep prophylactically to 10 hours of time in bed before the period of sleep restriction, performance declined at a slower rate and recovered to baseline more quickly, suggesting that sleep restriction and recovery vary as a function of prior sleep. Therefore, sleep extension or supplemental nap sleeps can be used as a prophylactic measure or countermeasure to lessen the performance effects of sleep deprivation during periods of extended wakefulness or sleep deprivation.

Looking at the actual article, the 5 recovery days were 8 h TIB (probably because the author works at an army hospital), which for me personally would still count as mild sleep deprivation (less than 8 hrs actual sleep = TST), and which is somewhat odd contrast with opening statement in the paper that 8 hours of actual sleep are considered non-deprived. But that seems to be the only study using a longer recovery period to date. Below is a graph from that paper: 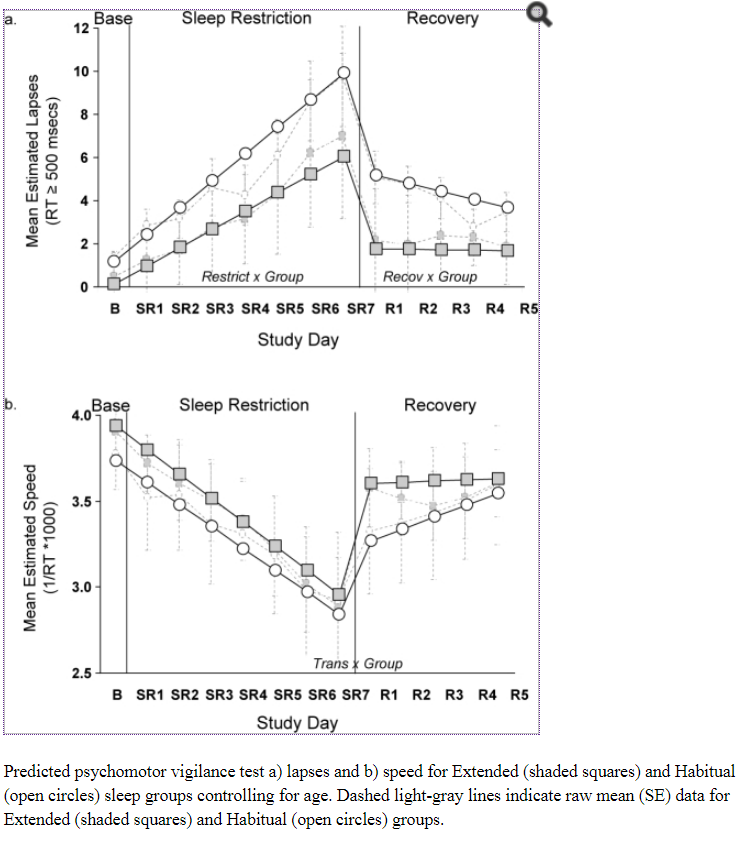 The two tests are part of PVT. And description of the two groups:

To determine Habitual Sleep schedules for volunteers assigned to the Habitual Group, actigraphic estimated total sleep time on weeknights (Sunday through Thursday nights; nights excluded if followed by a holiday or weekend) was determined, and 15 min were added to the average (to avoid inadvertently sleep restricting volunteers) and rounded up to the nearest 5 min for the final TIB amount. Bedtime was determined by subtracting TIB from the 07:00 rise time (i.e., a subject averaging 7 hours 15 min of sleep would have a bedtime of 23:45).

Frankly I find that being able to bank on sleep prior to deprivation, not just recover it thereafter, even more interesting. Also despite the obvious (and statistically significant) difference in PVT between groups,

No group differences in subjective sleepiness were evident during any phase of the study.

And also another finding

Honestly I'm a bit concerned about overfitting because this was a small study (two dozen participants). However they say in their discussion of related research that this observed interaction/influence (of age) is consistent with other studies. Perhaps it goes along with the received wisdom that older people [need to] sleep less.

Another paper derived from the same study of Rupp et al. looked at math throughput and task acquisition (tested using ANAM, which presents a significant learning effect) and found that their observations mostly mirror those for PVT, except that presleep wasn't as significant as recovery sleep for this math/learning test. 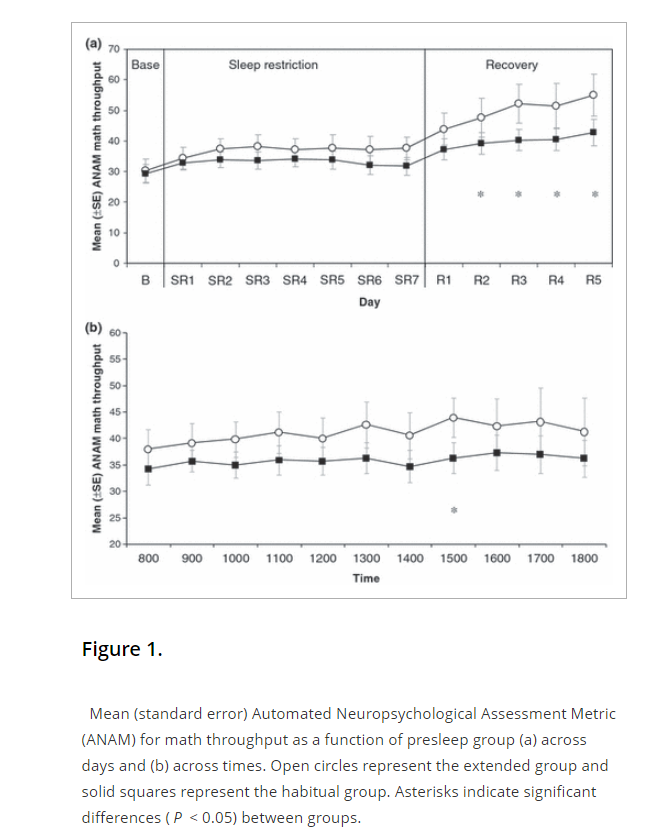 Finally, it's generally accepted (see e.g. Pilcher and Huffcutt) that sleep deprivation influences mood even more than either cognitive or motor performance, however it seems that the recovery is quicker (perhaps owing to the hormonal one?), at least in older people, cf. Reynolds et al.:

While the increase [in Total Mood Disturbance -- my note] tended to be greater in women, in both groups self-ratings of mood returned to baseline after 1 night of recovery sleep.

Everything up to 1:25 of this clip should answer your question. It looks like the general answer to your question is "No".

"[...]says Dr. David F. Dinges, one of the study authors and Chief of the Division of Sleep and Chronobiology at the University of Pennsylvania School of Medicine." Should give your more information on where to find the specific study they performed. Unfortunately, the name of this study was not given.

7
How much additional sleep is required to recover from a given number of hours of sleep deprivation?
5
How to compare cumulative sleep debts?
1
Sleep deprivation effect on brain
7
If you sleep during the day, do you need less sleep at night?
9
Can adults adapt to less sleep?
4
Do you need sleep every night?
4
Does night-sleep-deprivation have any effect on cognitive performance?
8
How much sleep is required to restore maximum cognitive functioning?
4
Adaptation to Discrete Perturbation in Sleep?
0
Are there any long term cognitive impairments from prolonged period reduced sleep?
See more linked questions

15
Can sleep become addictive?
11
Can lucid dreaming detract from the recuperative effect of REM sleep?
4
Do you need sleep every night?
7
If you sleep during the day, do you need less sleep at night?
9
Can adults adapt to less sleep?
9
Can time be slowed in a lucid dream?
3
Can you Counteract the Negative Effects of Sleep Deprivation?
7
Is there any scientific data showing one can learn while sleeping?
2
What evidences this technique of visualizing different color words in sequence, to help you sleep?