'Always Give a Reason Why' - How to describe this subject area?

In Dr. Robert Cialdini’s book, Influence, he cites a research study showing that simply adding the word “because” to a request multiplies the likelihood of compliance.

Interestingly, the study seems to indicate that the legitimacy of the reasons supplied did not seem as important to the outcome as you might suppose. In fact, it seems hardly necessary to have a real reason at all.

For example, you might ask to cut line at the post office, and be more likely to get a “yes” response from the person in front of you if you simply frame your question by saying something like, “Would it be possible for me to please cut a front of you in line, because I’m really in a hurry.”

I recognise the lack of substantiated evidence in the above quote, but I'm interested in learning about such empirically, scientifically proven behaviour and human psychology (eg through reputable peer-reviewed articles). To clarify, I seek not the hard data itself, but only conclusions and tips supported by credible evidence. I only chanced upon that above link, so to discover more in this area methodically and productively, what are some key words terming this subject? Where should I start?

I've no training in sciences, so I'd cherish answers and advice written in lay, simple, readable language.

This particular study, sometimes called the "Xerox Experiment", was done by Ellen Langer, who studies "mindfullness", but that may not be what you are looking for. It is also cited on Wikipedia under Attitude Change - Heuristic Processing:

It is worth noting however, that a study published in the same year by Stanley Milgram (famous for his obedience experiments in the 60's), cited on Wikipedia under "Breaching Experiments", about people giving up their seats in the subway found a similar success rate when no reason was given, but a significantly lower compliance rate if a trivial reason was provided:

the second condition, the trivial justification ... a much lower number gave up their seats.

A related field that a layman might find more accessible, is called "behavioural economics", and there is also a lot of overlap with "cognitive bias". Search YouTube for Dan Ariely, you'll learn lots of neat tips and tricks just like this one, backed by peer-reviewed studies, about how easily people can be manipulated.

Cialdini's book Influence is great, I wish I hadn't lost my copy of it...I always considered that to be a social psych book, so perhaps you should study social psychology if you have an interest in this sort of thing. You could also consider glancing at his Wikipedia page for more information about where his journal articles were published...this could provide some clues as to which journals/textbooks to look into.

Also note, the idea of adding the word "because" to a request is related to the idea of pretexting, which is studied by social engineers. While (I think) this isn't technically considered part of psychology, I would imagine that social engineering is considered relevant to cognitive science.

Disclaimer: I am not a professional psychologist, just an enthusiast.

Let me start by elaborating on experiments mentioned by Arnon Weinberg (because I think some of the details are necessary before trying to conclude from the perspective of later works):

Actually Wikipedia doesn't detail the Xerox experiment well enough. The actual result was a bit more complicated: for small favors (in which the requester had fewer [actually 5] pages to copy than the recipient of the request [who had 20]) it made no difference whether the reason given was non-informative ("placebic") or real/plausible. But when the favor was "big" (the requester had more copies [20] to make than the recipient [who had 5]), the reason given did make a difference... and in fact giving a "placebic" reason was no better than no reason at all for big favors. 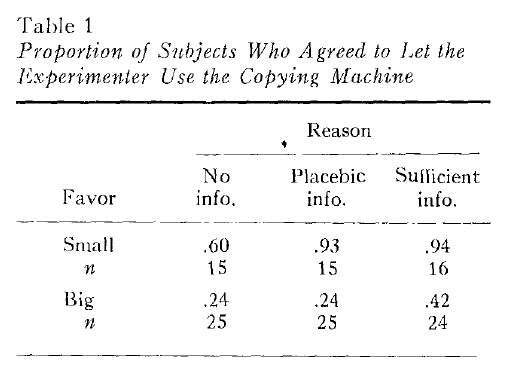 Also (contra to what Ana said) in the xerox experiment the reasons were terse, either bare request "Excuse me, I have 5 (20) pages. May I use the xerox machine?" or +"because I have to make copies" ("placebic") or +"because I'm in a rush" ("real"). I think that Cialdini’s logic for always giving a reason is that in this experiment giving a reason was not worse than giving none (in any scenario), but also keep in mind that "not worse" does not equal "always better"; giving a "placebic" reason for a big favor didn't work (but also didn't hurt).

I think that in the Milligram subway experiment the reason given was worse than "placebic" though. In the xerox experiment you cannot really refute the "placebic" reason "because I have to make copies" with respect to the use of the xerox (you can't [easily] make copies otherwise). So while it may sound weird it's not that grating (to me). On the other hand in the Milligram subway experiment, the reason was "I can't read my book standing up" which is something that most people can mentally refute as probably fake right away... But this is just me theorizing. It would be nice if someone redid one of the experiments with 4 arms for the argument given: none, implausible, neutral/repetition, and plausible.

In the (very highly cited ~8K cites in GS, ~10x the Xerox experiment) "Elaboration Likelihood Model of Persuasion" of Petty and Cacioppo (1986), giving a "placebic" argument would probably be classified as a peripheral route to persuasion. They note (actually it's one of their "postulates") that

By peripheral cues they mean among other things repetition (Trump being a good recent example, heh), distraction etc. I guess a "placebic" reason counts as a form of distraction. But also note that in the Xerox experiment the placebic reason is also a form repetition "I need X because I need X", alhouth with a slightly different formulation for the 2nd X.

Petty and Cacioppo actually discuss the Xerox experiment of Langer on p. 159, remarking after summarizing it that

Folkes (1985) provided a partial replication of this effect. In two field studies using the inconsequential request (making five copies), respondents were equally willing to comply whether the request containing the valid or the placebic reason. In a thind study, however, the subjects were asked to guess how they would respond to the requests and to "think carefully before answering". When instructed to think before responding, the valid reason produced significantly more anticipation of compliance than the placebic reason.

Furthermore!! Folkes pretty much did what I hoped someone would do, and also tested with an obnoxious reason:

Although providing a partial replication of Langer et al.(1978), Folkes takes issue with Langer's assertion that the placebic information is processed "mindlessly". Folkes argues that if the reasons are processed automatically under low consequences conditions, then a poor reason should as effective as a valid one. However she found a that a poor reason (e.g. "because I don't want to wait") was significantly less effective than a valid or placebic one under low consequence conditions.

So the conclusion is: don't just give any reason!

I'm not sure from which book of Cialdini the give-any-reason advice came. If it's from his 1984 Influence, then that could not have covered research that was published (a year) later. Cialdini has a 2001 book with the same title but a different subtitle though; hopefully that's more up-to-date, but I haven't checked.

Here's the actual data from Folke:

All requests were small in the Falke experiments (4 or 5 pages to copy) and also took place at two different locations; her experiment 2 was in the UK, the rest in the US. In Falke's experiments 1-3, she attempted to directly replicate (the small favor) experiment of Lange but with varying questions. Only in experiment 4 were the subjects instructed to think carefully before deciding.

The reason why Falke calls the grating reasons "controllable" is based on the level of volitional control (of the requester) implied in the reason:

Attribution research suggests that one distinction between good and bad excuses is in perceived controllability. An excuse can suggest one is compelled to perform an action or imply volitional control (Weiner, 1980). Lack of control mitigates responsibility for a transgression more than volitional control. Thus, when people ask favors for reasons they cannot control, their requests are more frequently complied with than when reasons for the requested favor are controllable (Barnes, Ickes, & Kidd, 1979; Weiner, 1980). In the copying machine paradigm, requests to go first because of controllable reasons (e.g., "because I don't want to wait") should be complied with less—they do not mitigate responsibility for needing the favor. When a person lacks control over the reason for wanting to go first (e.g., "because I feel really sick"), compliance should be greater.

Finally, Petty and Cacioppo also distinguish some personality factors affecting the result, in particular what they call "need for cognition". Individuals that rated higher on a self-reported measure for this factor had (objectively) more polarized attitudes on an argument than individuals who scored low on this measure.

Not the answer you're looking for? Browse other questions tagged cognitive-psychology social-cognition persuasion or ask your own question.

1
The art of exploiting people and taking advantage of them

11
Why do participants prefer to give input values that are "round numbers"?
16
Body Language: Why do we give each other the grumpy/frowning fake smile?
8
Lottery question, why do we people think this is logic?
1
how to train our brain to always use left part for thinking & deciding things?
4
Is there a known reason why people feel a bit bad after other people do something for them?
0
Whats the term used to describe a situation where one does not finish the work as he is always looking for a better solution?