What's the difference between a "mental disorder" and a bad personality trait?

Most people are held accountable for their actions. If diagnosed with a "mental disorder" however, they are often forgiven/treated more leniently and exempted from punishment.

The same thing couldn't be said about a bad personality trait however. No one is exempted from murder for say "not being very compassionate" or "being an asshole".

Mental disorders however only seem to be a term of describe a set of bad personality traits that are displayed concurrently though. So why the special treatment?

What's the difference between a mental disorder and a bad personality trait?

I don't want to address the issue of defining mental disorders in general here, because just about any malfunctioning system in the brain can be considered a disorder. However, some disorders affect the set of processes in the brain which ultimately determine whether or not someone takes an action (the neural basis of volition, or "free will", if you will...). If these decision processes are broken, people shouldn't be held responsible for what they do, because they really have no control. So, a "mental disorder" which exempts one from responsibility can be considered one which consists of damage to the following processes: 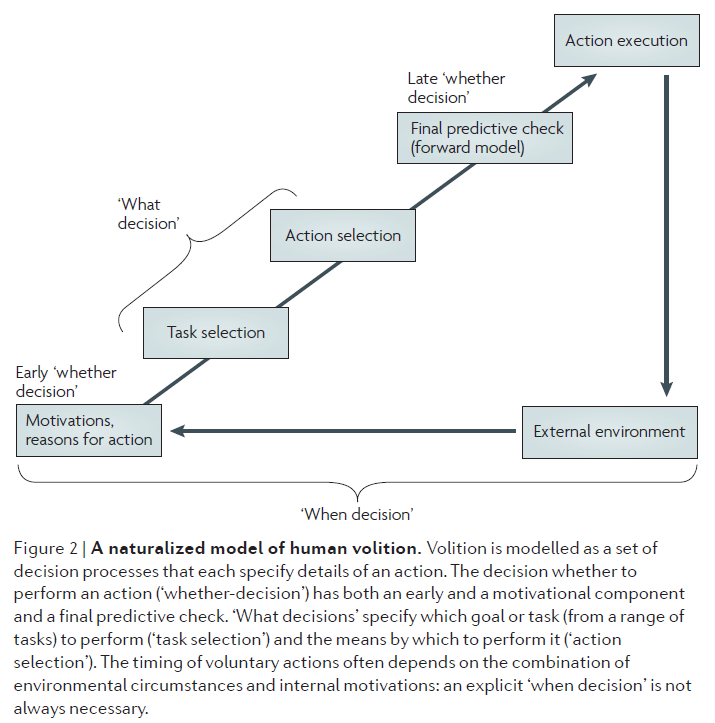 Of course, there is the philosphical objection that mechanistic explanation (deterministic or random, doesn't matter) means nobody has free will - but the issue in society is really about free will as the ability to learn rules and follow them. A bad personality trait usually doesn't affect the above processes, and therefore doesn't impede someone's ability to make their own decisions.

I Upvoted @StrangeLoop's excellent answer. I did want to point out that the law is applied unevenly across the United States.

Are people ever exempted from prosecution for being a$$holes? Absolutely. The California Highway Patrolman who beat the homeless woman trying to cross the highway was supported by his commander (I haven't heard the latest; I know she's suing.) The video is here. The CHP beat her up to "protect her from injuring herself". Read about police killing mentally retarded, unarmed teenagers, little old ladies, etc.

There was a fascinating case in the news of an epileptic who had a part of his brain removed to control his seizures. After the surgery, he began to buy pornography, then child pornography. Neurosurgeons testified that the part of the brain they removed was indeed responsible for this predilection, but because he knew better than to put the porn on his work computer, he was judges to be in charge of at least some of his behavior. He got half the usual sentence and drugs have rendered him back into the nice guy he was before (and he really was. You can listen to his story on Radiolab.)

An entire field called neurolaw has cropped up to deal with how the law should treat criminals with neurological conditions.

To answer your original question, many people with bad personality traits have mental disorders. Borderline Personalities drive people crazy. So do kids with Oppositional Defiant Disorder. These people, as long as they are "rational" aren't spared from the law (Jodi Arias, for example, probably suffers from Borderline Personality Disorder. Still, she knew killing someone wasn't really a reasonable option.)

Andrea Yates, though, suffering from severe post-partum depression with psychosis, really believed that the only way to "save" her children from hell was to drown them. The most responsible person in that case - her husband - got off scott-free. (He was warned after her PPD/P with her fourth child that she should never get pregnant again. He wanted a basketball team of children (he actually said this). He stopped her psychiatric visits and meds, got her pregnant again, and in the midst of her psychosis, even though she admitted she felt the need to kill her children (which his family and the psychiatrist she was seeing knew; he stopped those visits, too), he left her alone with the kids.

Th point is the law (courts) is not consistent or even consistently necessarily rational. Often, though, it does the right thing.

Not the answer you're looking for? Browse other questions tagged personality terminology clinical-psychology or ask your own question.

2
What's the difference between flaws of character and a personality disorder?