Do safety features cause drivers to engage in more risky behavior than they otherwise would?

It seems to be generally assumed that making cars safer for the occupants will reduce death, injury, and damage from traffic accidents.

What are some examples of significant empirical research on this topic? Specifically, do safety features cause drivers to engage in more risky behavior than they otherwise would? If so, what is the net effect of additional safety mechanisms? 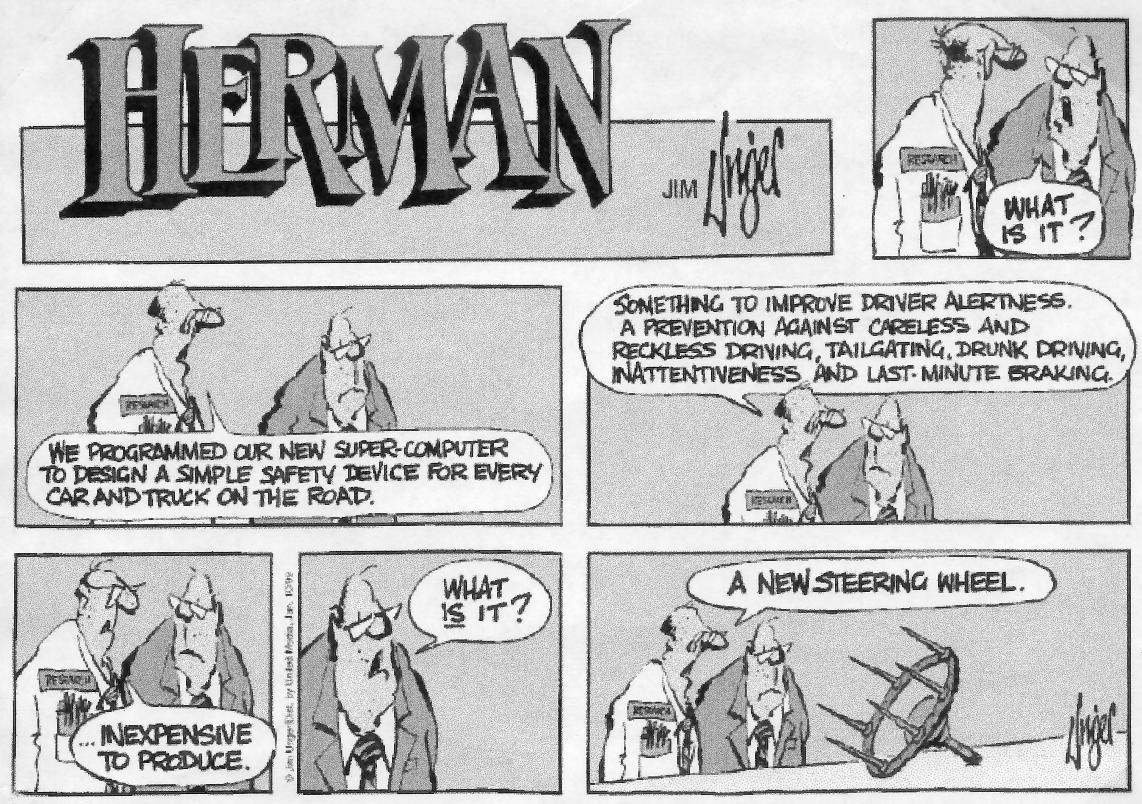 Any review in this area should start with Peltzman's 1975 JPE article. Peltzman was writing a few years after the 1968 Motor Vehicle Safety Act (U.S.) went into effect. The act required, among other things, padded dash boards and seat belts. He says (p. 717):

The one result of this study that can be put forward most confidently is that auto safety regulation has not affected the highway death rate. Neither the time-series nor cross-section data permit any other conclusion. However, these data are not as decisive about what underlies this result. On one interpretation, safety regulation has decreased the risk of death from an accident by more than an unregulated market would have, but drivers have offset this by taking greater accident risk.

In general, the idea is that seat belts and other safety devices may save lives if the accident rate is held constant, but that in reality, wearing a seat belt may induce more risk taking and thus more accidents overall (moral hazard, or Peltzman's "compensating behavior"). Then, it is not obvious whether more accidents which are, on average, less fatal will result in more deaths overall.

Of course, Peltzman didn't settle the matter. More recently, Cohen and Eniav (2003) found the opposite--that safety devices unambiguously save lives and that there is no evidence of additional risk-taking by seat belt wearers. Levitt and Porter (2001) came to a similar conclusion (this later paper is worth reading because it brings to light the issue of sample selection problems (à la Heckman), and a way of correcting for it). It seems, at least for seat belts, that the matter has been settled by these later papers. But, these lines of research highlight that, in general, we cannot say for certain what the net effect of safety regulations will be a priori.

Interestingly, the Cohen paper focuses on primary enforcement, that is, providing incentives to use safety devices (or, rather, disincentives for not using them) beyond the live-saving benefits. This would tend to cause people who wouldn't ordinarily use safety devices to use them. If it is true that drivers are compensating for their unsafe behavior by using safety devices, then more safe drivers would be induced to use the devices and the moral hazard may be somewhat offset. This tends to indicate that non-optional safety improvements may have a larger impact on deaths per mile than optional safety improvements.

Oh, and here is the spiked steering wheel comic you are looking for.

I think it varies by safety equipment, and that you'll get different results for anti-lock brakes (like the famous Munich taxi cab study) or air-bags.

Someone asks a related question of a Nobel Prize Winner in Economics in a public forum (who was speaking off the record).

His opinion was yes, because the fundamental issue was that human beings had a certain tolerance level for "accidents," so that if you make cars safer, people would drive more recklessly with the safer vehicles, until the accident rate reached the old, tolerated levels.

At least this was the example he used to illustrate his point. The original question was did financial reforms over the past century/decade/year make the financial system safer.