Why is it easier to fall asleep in the dark?

I'm curious if there is any neurological mechanism that explains why falling asleep is easier in the dark.

I recognize that this isn't true universally -- a phobia of darkness might make it easier to sleep with the lights on -- but it seems to be true for most people.

I'm particularly curious if there is a general explanation that might explain why it is easier to fall asleep in the absence of much sensory stimulation (i.e., a quiet environment versus a noisy one, or if darkness is a special case due to our circadian rhythms).

The reason is a small nucleus above the optic chiasm in the hypothalamus called the suprachiasmatic nucleus (SCN), found across many different species. Comprising only approximately 20,000 neurons, the human SCN is nonetheless responsible for regulating a vast number of circadian functions over the entire body. The SCN is, for all intents and purposes, the pacemaker of the brain, and it runs on light: if ambient light is detected, then it must be because it is time to be awake, and the circadian rhythm is slowly adjusted accordingly. 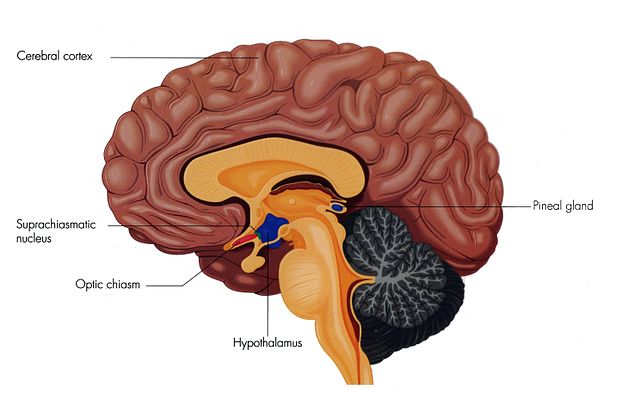 In mammals, the SCN receives input through the retinohypothalamic tract, which originates at a set of special photosensitive ganglion cells on the retina. They contribute to regulating the circadian rhythm by expressing melanopsin (Berson, Dunn and Takao, 2002). These highly specialized, sensitive and non-image-forming retinal neurons evolved to detect an environment's ambient light levels. They are most sensitive to blue light wavelengths of 488 nanometers (al Enazi et al., 2011), which may in part explain why users of electronic monitors sometimes report difficulties falling asleep. 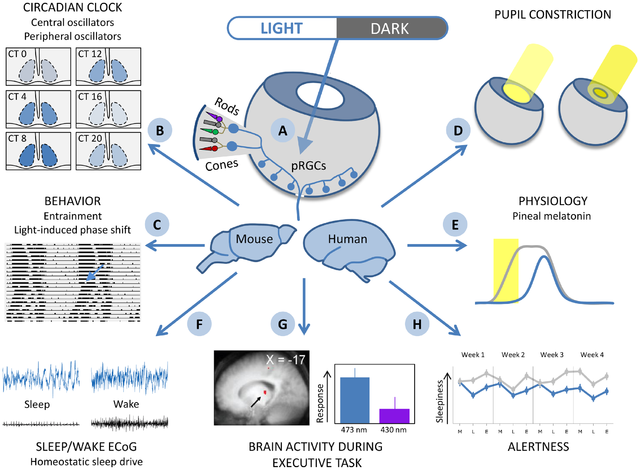 These fairly recent discoveries, while published in top-tier journals and widely hailed, have generated some controversy. Due to the ethical difficulties in deploying a methodology consisting mostly of disabling cones and rods in human samples, most of the evidence has come from animal models. At least one study, however, managed to discover patients naturally lacking cones and rods due to a rare illness, and they did report support for the SCN account in humans (Zaidi et al., 2007):

We examined the spectral sensitivity of non-image-forming responses in two profoundly blind subjects lacking functional rods and cones (one male, 56 yr old; one female, 87 yr old). In the male subject, we found that short-wavelength light preferentially suppressed melatonin, reset the circadian pacemaker, and directly enhanced alertness compared to 555 nm exposure, which is the peak sensitivity of the photopic visual system. In an action spectrum for pupillary constriction, the female subject exhibited a peak spectral sensitivity (λmax) of 480 nm, matching that of the pRGCs but not that of the rods and cones. This subject was also able to correctly report a threshold short-wavelength stimulus (∼480 nm) but not other wavelengths. Collectively these data show that pRGCs contribute to both circadian physiology and rudimentary visual awareness in humans and challenge the assumption that rod- and cone-based photoreception mediate all “visual” responses to light.

Not the answer you're looking for? Browse other questions tagged neuroscience cognitive-neuroscience sleep physiology or ask your own question.

12
What is the mechanism behind unihemispheric sleep in animals?
8
Is there a scientific term for when you fall asleep because you can't handle something?
0
Is this expected to happen while asleep?
7
Is mindfulness meditation an effective method to fall asleep?
1
Is our sense of smell heightened when we are asleep?
4
How can someone asleep recognize a very brief sound?