Difference between SSVEP and P300

I have read about steady state visually evoked potentials (SSVEP) and P300 as different subjects. But it seems that they are related to each other.

Active Oldest Votes
3
$\begingroup$
Want to improve this post? Add citations from reputable sources by editing the post. Posts with unsourced content may be edited or deleted.

The P300 a reflection of cognitive processing, an increased response in the presence of deviance detection, decision making, attention, categorization... some higher order processing. The sensory stimulation can be long gone from the display, but as long as it's still being processed by the cognitive apparatus, the P300 can arise. The 300 stands for milliseconds, i.e. it roughly begins about that much after stimulus onset. The only connection between the two is that they're electrophysiological measures, i.e. you can capture both with M/EEG, and that you might observe both in the same brain regions.

@Ana is basically correct (possibly baring the fact that the P3 is famous for being latency variant, not stable at 300msec), and I really don't want to contradict her or steal her checkmark, but since it's recent and interesting, I would like to point to some recent research by O'Connell and colleagues looking at correlations and similarities between the two measures, as the primary EEG indexes of attention and evidence accumulation. Incidentally, it also shows the differences in topography, polarity and size for the two, as well as the slight dissociation in time course. (Note also that the P3 is a distinct, monophasic peak - it has an amplitude; the SSVEP is a periodic pattern, strictly speaking, it rather has power.)

In the following picture, the close correspondence between the SSVEP and the P3 is demonstrated; see the figure caption below. 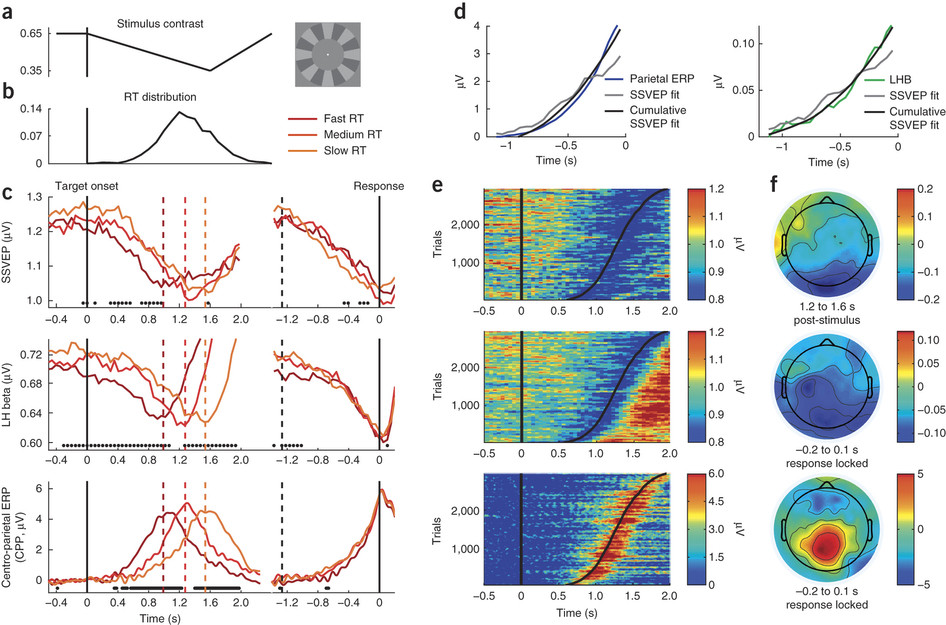 (a) Target contrast reduction time course. (b) Grand-average reaction time (RT) distribution (19 subjects). Single trials were sorted by reaction time and divided into three equal-sized bins. (c) Neural signals undergoing gradual changes on the timescale of the physical contrast change, aligned to stimulus onset (left) and response (right). Vertical dashed lines denote mean reaction time. Markers running along the bottom of each plot indicate time points at which a linear regression of signal amplitude onto reaction time reached significance (P < 0.05). (d) The cumulative sum of SSVEP divergence from baseline provided a better fit for the dynamics of the LHB and CPP signals than the raw SSVEP amplitude. To facilitate visualization of the comparison, we baseline-subtracted and inverted SSVEP amplitude. LHB was transformed for each participant so that it reflected the percentage decrease from baseline, then inverted. (e) Single-trial surface plots showing the temporal relationship between each neural signal (normalized relative to each individual's baseline average) and target detection latency (curved black line). Single-trial SSVEP, LHB and CPP signals were pooled across participants, sorted by reaction time and smoothed over bins of 50 trials with a Gaussian-weighted moving average using the EEGLAB toolbox38. The latency of action execution was closely tied to that of the two decision signals, but was less closely related to the sensory evidence signal. (f) Signal scalp topographies, all with pretarget baseline subtracted. Color bars in e and f represent amplitudes.

11
Computational Model Linking Neural Activity to Behavior
2
How many action potentials from presynaptic neurons would be required to make a postsynaptic neuron fire?
7
What's the relation between BCM and Oja's learning rule?
6
Measurement of phase difference between two signals using cross correlation vs. fourier transform
9
What are some good references for preprocessing and analysis of the P300 response from EEG data in Python?
10
Does an action potential abolish an excitatory postsynaptic potential?
5
Difference between content-addressable memory and associative memory?
5
What is the consequences to be a person who works in theory of science?