Do people who lose their faith tend to replace it with other non-evidence-based reasoning?

I was watching this talk by Phil Plait given at TAM(The Amazing Meeting) 8. You can find a partial transcript here. It will help provide some context.

In the talk he makes the following claim:

Q1: Which studies is he referring to?

Q2: How much evidence is there to support the claim ?

This is an interesting question, so I'll take a stab at it. Direct evidence for the claim is hard to come by. Generally, religious affiliations, conversions, and loss of faith are self-identified in surveys. The reliance on self-identification makes it difficult to test the claim that people move to some other non-evidence-based reasoning, as they may not be aware of it. Indirect evidence is easier to find.

The extensive Religious Landscape Survey (2009) by the Pew Forum on Religion & Public Life for example, asks the self-identified "unaffiliated" who grew up religious to explain their reasons for leaving their faith. Only about 40% leaving Christianity cite not believing in God as their reason, and less than 30% leaving Catholicism cite no longer being religious in some way. Looking at specific survey responses, most converts leave their religion for reasons other than relying on science and logic, and remain "spiritual" in some way.

Another way to test the claim is to ask people about their beliefs, as is nicely summarized here, from the same survey. A large proportion of non-religiously affiliated participants - even some self-identified atheists - believe in God, the afterlife, or some other type of spirituality. 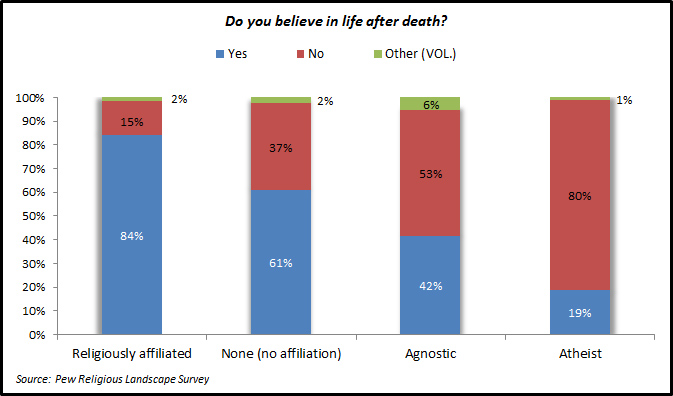 Not the answer you're looking for? Browse other questions tagged cognitive-psychology social-psychology religion or ask your own question.

2
Is there evidence that “people in Eastern societies are more in touch with their communities while Western societies value uniqueness more”?
3
How to refer to the phenomenon of people only absorbing evidence which confirms their beliefs?
3
Can alter-personas of a person with MPD/DID have mental diseases of their own that other 'alters' don't have
0
Names of branches of neuroscience and related fields dealing with hunger, taste, attachment, and digestion, and their relationship to other perception
1
Why do some people bond with their captors and vice versa?
9
Is there a neutral term for people who tend to avoid face-to-face or video/audio communication?
3
Is there a name for arguing with other people in one's mind?
8
Is there a scientific explanation for dramatic body shaking and trembling in religious settings? (see videos for illustrative examples)