Why do scientists say brains are faster than computers?

Why isn't this argument valid?

There is a basic epistemological problem here that was only touched upon by Chuck Sherrington - everyone is making the assumption that the brain processes the same kind of information as a digital computer. There is no real evidence to suggest that it does, in fact. A digital computer is an instantiation of a Turing machine, which is equivalent to certain kinds of automata. In order for the "processing power" of the brain to be compared to that of a digital computer in the first place, one needs to show that the brain employs representations (discrete entitites/states like bits) and rules (well-defined transitions between states/bits). Nobody has even come close to doing this, even for a subsection of the brain. This would be done by showing that the brain implements some digital computation - David Chalmers' famously [1] explains how this needs to be done. According to current the state of research, the brain seems to be a complex biological system, operating at multiple levels of measurement, and does not process information in discrete terms! And yes, Chuck Sherrington says it, neurons are not simply on/off!

Have you ever seen IBM's Watson? Watson is composed of a cluster of ninety IBM Power 750 servers, each of which uses a 3.5 GHz POWER7 eight core processor, with four threads per core. In total, the system has 2,880 POWER7 processor cores and has 16 terabytes of RAM. It must be kept in a (very) large refrigerated room.

Watson's official debut was on the game show Jeopardy, where it was pitted against two of Jeopardy's best players. It won, but the humans gave it a run for its money. Most believe the win was more due to Watson's faster response time (it was electronically keyed into the buzzer; Watson could activate the buzzer within about eight milliseconds, whereas the human response time to the go ahead light signal is several tenths of a second. In addition, to access memory more quickly, content was stored in Watson's RAM for the game because data stored on hard drives are too slow to access.

Watson was devised as a medical diagnostician (as well as other applications). With many years, scores of technicians, who knows how many billions of dollars, and access to medical encyclopedias, books, medical journals and the internet, it can outperform third year medical students in only one area: oncology (and even then, only lung, prostate and breast CA).

So, one average medical resident (4 years of medical school, and, say, second year of residency) can outperform a very, very fast medical supercomputer 99% of the time. I specialize in Primary Care medicine: Family and Emergency Medicine. With a few exceptions per year, within minutes of initiating a conversation with a patient, by watching the patient, reading his vital signs, and hearing answers to perhaps a dozen questions, I already have narrowed down my diagnoses to 2 or 3 top candidates and several other lesser considerations. I am one individual with one brain which accesses only to the information to which I've been exposed, yet I will outperform a medical supercomputer >99% of the time. In under 10 minutes. (This does not mean that I only spend 10 minutes with a patient. Medicine is about more than the correct diagnosis.) 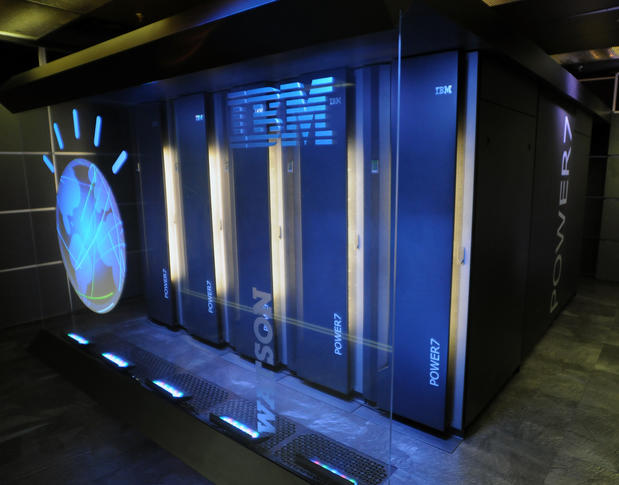 My brain is about the size of the "W" etched on the room's window.

You tell me: Which is "faster", a supercomputer or a human brain? It really does depend on your definition of "faster", doesn't it?

I'm not sure the math checks out in the question (the CPU cycles per second seems awfully high), but I think there are some useful principles to keep in mind regardless of the details of the math.

So let's assume that we do have a computer that can perform more operations per second than the combined sum of all action potentials in the brain per second. Is the computer faster than the brain?

The main point is that looking at the speed of transistors and neurons is the wrong level -- or at least it provides an incomplete picture -- to be thinking about the speed of information processing. Not that the 'hardware' doesn't matter, but other factors matter too. For a computer, the software matters. For a brain, the network of connections between neurons matters.

Anology Taking the analogy and calculations directly, you are assuming that the fundamental computing unit of the brain is the neuron; we do not know if this is true. It could be a cortical column, a group of several neurons, the neuron, a dendritic branch (a fascinating review paper!), a synapse, receptors or neurotransmitter vesicles (how about glial cells?). This paper describes the somewhat accidental fascination with the historical view of a neuron being 'the unit'.

So, to the numbers. If one treats a singular neuron's action potential as a 1/0 like a transistor, sure you're numbers kind of make sense. (Not sure where you got the 1% figure from?) However this is making the assumption I eluded to above. If you were to run the numbers with synapses, the brain might win.

You are further assuming that a 1/0, spike or no spike, representation of a neuron is all that the brain does. We do not know how the brain encodes information -- as others have said, it might not work in the same serial 1/0 fashion that we have engineered computers to operate. Information/processing in the brain could be via individual neurons firing rates, population firing rates, spike timing, etc. (sections 1.5, 1.6 and 1.7 review some). Imagine that the timing of when a transistor flipped compared to another was important! Moreover, this only considers action potentials (or EPSPs if one redoes the numbers with synapses). Neurons (and synapses) are extremely non-linear and a lot of information/processing might be undertaken before or after an action potential (EPSP). This is the age old question of analogue (brains) vs. digital (modern computers).

Serial vs. parallel I think an important point missing from previous answers is the fact that the brain is massively parallel. That is, there is not one processor serially undertaking instructions.

A typical CPU (core to be specific) in a computer may be very fast in terms of calculations per second -- arguably a great deal faster than a single neuron -- however, there are very few of these individual units when compared to the brain. This is why supercomputers take advantage of hundreds of CPUs (and cores). However, the numbers of these cores is extremely low when compared to the brain (if we are assuming that a neuron is the fundamental unit, see above), where an analogy might be that each core/neuron is a lot slower, there are however millions (trillions if 'the unit' is a synapse) of cores.

Yes, you have considered that a CPU has many many transitors on it, however the CPU itself it still only processing information in a serial fashion. It does this operation, then this operation, then this etc. As I said above, this is why supercomputers use many CPUs as this allows them to do a somewhat parallel process. However this is more complicated as in reality, a computer's parallel programme is typically just a serial one split a few times. For example, you want to calculate what A+b is where A is a huge matrix and b is a constant. One can do this in serial by iterating through all the elements in A and adding b; or, one can 'parallelise' this by using 10 CPUs and splitting the matrix in to 10 subsets and having each CPU do a serial operation on their own subset and finally concatenate the resulting subsets back in to A again. This isn't really parallel computing but rather smaller serial operations (parallel programming is hard). The brain is truly parallel. (The quote in the answer to this previous question has a great analogy in it.)

To compare the two is fundamentally flawed as the way we quantify the performance of a CPU does not apply to the brain. It might be possible to compare them if a common metric could be devised, but this would mean we would need to understand how the brain processes information in the first place, which is a long long way off.

As a final note, have a look at this article.

(Edited to include more detail as there was interest/comments.)

The computer analogy fails on several counts. Most notably, the status of a "bit" in a computer system is completely determined at any one time by the running program. Neurons and synapses are quantum entities, whose state at any one time is a superposition. Both neurons and synapses are living things, to some extent acting independently. Each synapse is a quantum nanocomputer, vastly more powerful than any existing computer and performing a "calculation" that cannot, even in principle, be carried out by a computer.