How long does physical attraction typically last in a permanent relationship?

How long, on average (and with as much other statistical data, e.g. standard deviation, as possible) does physical attraction between male and female in a permanent relationship last?

I believe this is a well-founded question based on the assumption that elderly couples are almost never physically attracted to one another, so almost always there is a point of earliest physical attraction loss. If you think that assumption is false, please let me know.

I hope that's what you're asking for. Elaine Hatfield (of the "would you go to bed with me?" study fame) has developed the Passionate Love Scale; Tennov has researched Limerence. Other famous names in this regard are Liebowitz and (Helen) Fisher. The counterpart to passionate love is often called companionate love, attachment, or affection.

Qualitatively speaking, on average, passionate love goes down with relation length. As Hatfield says, time has a "corrosive effect". Past researchers conceptualize this in a multi-stage model of relationships, where relationships naturally transition from passionate love into compassionate attachment. A well-known correlate of this is the "7-year itch", corresponding to a globally consistent mode around 4 years after marriage for divorces. However, some people report passionate love after decades of being together.

In all attempts to quantify any of this, there are a number of critical cofounds. @what has already brought up that some objective component of attractiveness might naturally decline with age. I'm not so sure this is that dramatic though, because there are well-known compensatory mechanisms for attraction within relationships that might be more important than e.g. decline of outsider-rated attractiveness with age. After all, what correlates with how attractive you rate someone is not the same as how attractive your partner is to you.
Moreover, there is a reliable difference between studies on younger and on older couples; the correlation between relationship length and passionate love/attraction is very reliable in young couples, but much weaker in older couples, and while younger couples often break up seemingly because passion has waned (as passion and satisfaction are correlated), there are older couples who're passionately in love (here and here). As Hatfield speculates, this might be because couples were passion is stable have a much higher chance to last, but those where it wanes quicker, end quicker. So that's for cofounds. I did not find any clear solution to this problem, and I can't really think of a good way of dealing with the self-selection problem (where longer relationships will inherently qualitatively differ from younger ones because they must have certain qualities to have come that far).
However, the relationship within relationships seems to hold, with a negative correlation within both older and younger relationships.

Quantitatively speaking, a much-quoted figure is Tennov's "18 months to three years". Exceptions are assumed to be comparatively rare, but also known to exist.
I can't give you the standard deviation on this, but I can give you something better: a regression model. One is by Sprecher & Regan, page 172, one by Hatfield, page 404.
Of course, this will not give you the single point in time where passionate love suddenly ends; but this is not realistic either. In relationships, attraction usually doesn't suddenly stop, it wanes. Graphically speaking: 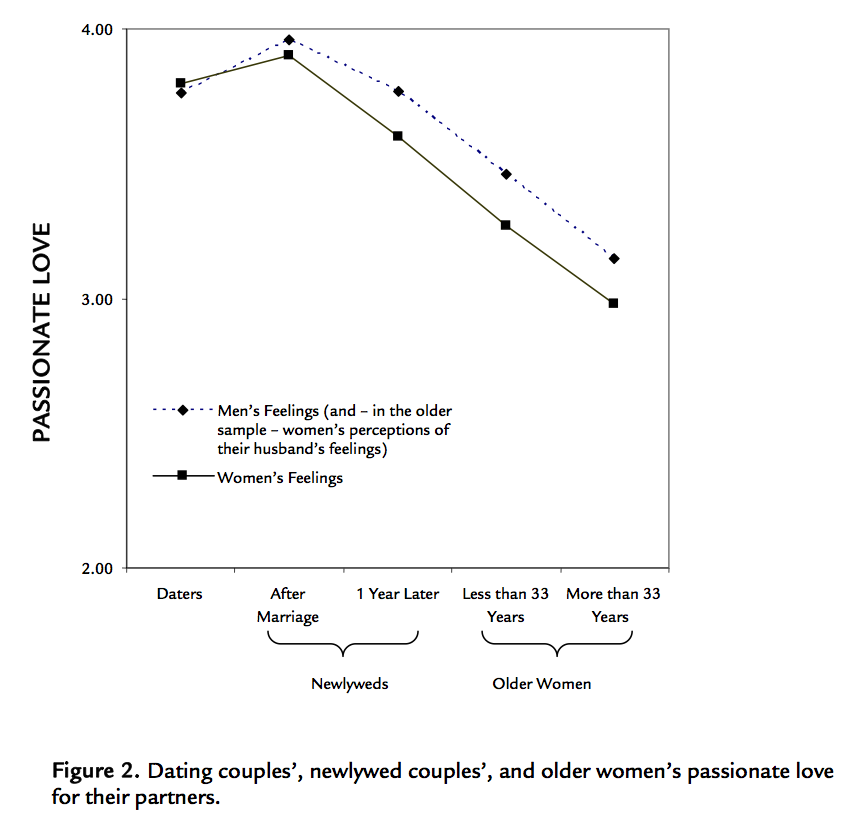 However, I also found a much more optimistic picture for physical attractiveness over time in a large (almost 2000 people) sample:

What is clear even here however is the "7th-year itch".

I think here is study you are looking for: Sex Differences in the Implications of Partner Physical Attractiveness for the Trajectory of Marital Satisfaction

This is not so easy question to answer. For sure there are difference between male and female in M and sd. Especially it is determined by interpersonal dynamics (Koch, Mansfield...)

The second difference is in love style (Sternberg, Triangular theory of love)

Also it is known that attractivnes at age 16 is also important (Benzeval, Green...)

Andy many other variables is important for this simple question...

EDIT: Im sorry for bad formating. I am on work now so I wanted to reply quick. In first study (you have to download the study and read it) you have a lot of predictors of martial satisfaction including atractivnes of wife) at beginning of relationship and later. So you can track how physical atractivness decline and other predictors raise in concept of martial satisfaction)

Other articles are here to describe other influential variables which are not described in first article.

Please read the first article, you have APA full text in the upper right corner.

Not the answer you're looking for? Browse other questions tagged social-psychology statistics sexuality physical-attraction or ask your own question.