Are the lobes of the brain anatomically distinct, or is the distinction between them not as well-defined?

If I had a brain in front of me, would I be able to find some kind of crevasse or something separately each lobe from the next? I guess what I'm asking is, are lobes more arbitrarily-defined regions of the brain, or is there a definite distinction between them anatomically?

There are anatomical features that make lobe demarcations fairly non-arbitrary. From Wikipedia: 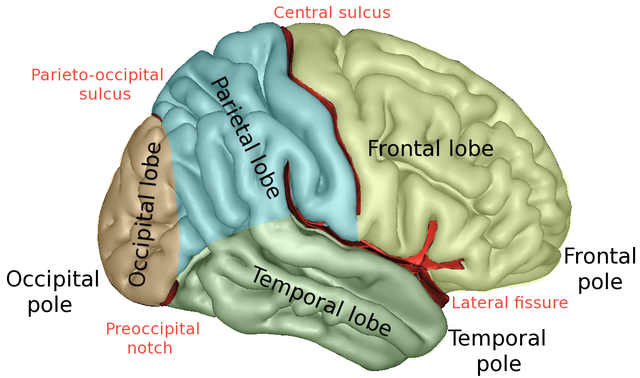 There are some borders here that may be more arbitrary than others:

These lines seem to be anchored on non-arbitrary points, but their flatness (lack of curves/bumps) may be somewhat arbitrary. An analogy would be the southern border of my home state, Minnesota. It's a flat east-to-west line between two rivers that form the eastern and western borders. The rivers aren't arbitrary, but the southern border didn't have to be a straight line. (Why not a sine wave? That surely would've made things more interesting!) If there's more to these borders of the brain than just their anchor points at either end, it's not apparent to me from this image or any other sources I know offhand, but it would be nice to see another answer from anyone who might know better than I.

Building off of Nick Stauner's answer, the lobes are named after the cranial bones that cover them. You can see the overlap by looking at the bones of the skull (image from Wikipedia). 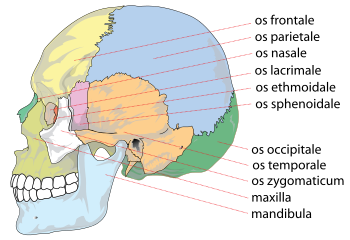 I'm speculating now, but my guess would be that an anatomist simply picked sulci (the "valleys" in the folds of the cortical surface) that were close to the bone boundaries and used those as the demarcating lines of the various lobes. Maybe someone else can verify, or correct me!

Not the answer you're looking for? Browse other questions tagged neuroscience frontal-lobes or ask your own question.

6
Measuring changes in hemispheric dominance over time
5
Does each sensory neuron type have a characteristic spike sequence pattern?
6
Classic cognitive neuroscience studies that highlight conclusions that could not be drawn from behavioral experiments
6
Significance of 4 stimulus cards in the Wisconsin Card Sorting Test?
1
Jung's Anima and Neurological Basis in Split-Brain Patients; Left-Persona and Right-Anima
4
If the optic nerve transmits to both hemispheres, how do split-brain experiments work?
1
Where to find information regarding the effect of ion concentration in the brain on behaviour?