Does transparency have its own visual channel?

Referring to (for example) Visual Thinking for Design, the book discusses various low-level processing channels in the brain. Colour and orientation are two examples.

I wonder if transparency is another such channel; and if it isn't, how exactly transparency manifests itself within the brain.

Take this illusion from Adelson (2000) as an example. 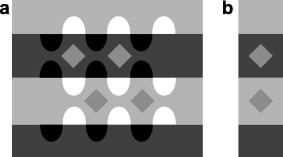 There are a large number of papers on mathematical models of illusory transparency perception. A starting point might be Anderson (1997) and the references within. But, the general message from this research is that we sometimes perceive transparency as the result of imposing some kind of higher-order structure to make sense of the image.

Not the answer you're looking for? Browse other questions tagged vision or ask your own question.

8
Is the concept of neuroplasticity applicable to visual cortex and how does it affect visual perception?
5
Sensory dissonance: Will the visual or auditory channel win?
10
Does perception have a "frame rate"?
6
Do we have a predisposition to view visual stimuli in a clockwise pattern?
6
Do the colour blind have a distinct visual cortex structure?
3
Does the retina encode visual information like a Bitmap or an SVG?
7
How does the brain break down visual information for processing? What "channels" is visual input broken into?
4
How does the brain structure 3D visual data?
8
What does the visual feed from the retina look like before it is processed by the visual cortex?
2
What are the definitions of 'multi-channel coding' and 'opponent channel coding'?