There's a proverb: "everything's decided in mind" - changing attitude of thing may help going through things.

Does it also mean that if someone is depressed then there'd be enough to change how he sees the world to cure his/her depression? Or is it a deeper problem?

The proverb you mention is overly general to the point of being largely false (or at least unfalsifiable, to give some credit to the defensibility of philosophical solipsism otherwise). @JunJun and @felino's answers also generalize too much, but this is partly a consequence of a lack of specificity in the OP. Depression in general is widely misunderstood and commonly oversimplified.

I prefer to conceptualize depression in general as a latent, dimensional, symptomatic state that is linked to its causes by theory, not by definition. This means not directly measured, not truly dichotomous (like clinical diagnosis often is – people are generally either diagnosed as having a mood disorder or not having one, but whether they truly are depressed is more a matter of degree), not a disease or disorder per se but rather a consequence thereof, and not defined as resulting from any one cause. This concept permits research to identify several partial influences that may operate together or separately to produce depression, and this is in fact what research on depression has done.

As @what points out, depression is known to have both genetic and environmental influences. Environmental influences are certainly not decided exclusively in the mind – this is the first reason your proverb overgeneralizes. Second, genetic influences are hardly decided in the sense of being voluntary. What remains may permit voluntary intervention, but not every case of depression leaves anything remaining.

Attitude change may aid coping in these circumstances, but one could hardly expect it to cure depressed affect altogether when one has good reasons to feel depressed or no real control over its sources.

However, many cases may arise from problematic attitudes (e.g., low self-esteem, external locus of control, social alienation). As mentioned in my answer to "https://cogsci.stackexchange.com/q/5803/4086" Lyubomirsky (2008) argues that for average people in average circumstances, roughly 2/5 of one's happiness may be altered voluntarily, as through attitude change: 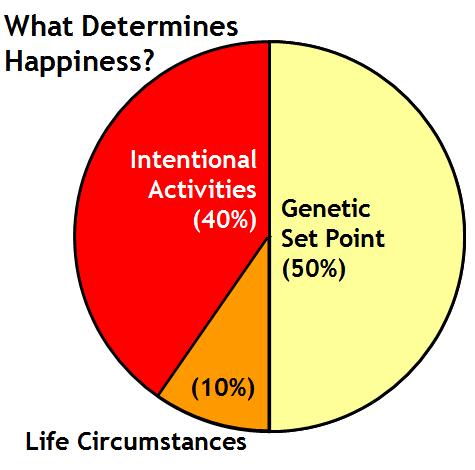 Again, this won't be true in every case, especially those affected by special circumstances or involuntary or biological factors. Still, in many cases, it's enough malleability to facilitate important changes. In a falsely dichotomous model of depression, it's plenty of room in which to cross a clinical threshold and thereby become "not depressed". From a more dimensional standpoint, it's not going to allow anyone to change from the most depressed person to the happiest or vice versa: it's only enough to allow a percentile change of roughly 40% on average.

Reference
Lyubomirsky, S. (2008). The how of happiness: A scientific approach to getting the life you want. Penguin.

I'm not any kind of professional in this field, but I can say just a few things about this from experience in my family.

I thought depressive feelings and being diagnosed with depression are one and the same. But health of a family member gave me insight into feelings that can't be changed just because your belief changes.

Depressed person, with altered brain chemistry, is not a person whose mood you can change by persuading him/her and changing his/her beliefs. Once brain chemistry is not in balance, like in average healthy person, it's not a healthy brain anymore. You can feel ups and downs, but depressed person is feeling down or pretending to be ok. It's not a regular mood wave of the day.

Also, even if you could present to such person different beliefs, I believe they are unable to change/learn because of their dark mood. I mean, who in the world learns with mind focused on depressive thoughts?

Person that isn't ill, and is just feeling down during the day is the one that can change their depressive feeling with change of beliefs, because it's temporary anyway.

For example, when I feel down, i have two options, keep feeling down until it's gone on it's own,or look at my belief and check if I'm too negative/harsh. But someone who is ill,isn't really capable of looking inwards with compassion or with rationality,for that matter. It's really two different worlds.

I hope this helps any.

I'm not an expert but I would like to try an answer.

There's a story behind every person. There's a reason why they're the way they are. They aren't just like that because they want to. Something in the past created them, and sometimes it's impossible to fix them.

Wayne Dyer in his main book clearly explains the influence of the education on the making of our beliefs.

The cognitive psychology explains how beliefs, emotions and behavior are strongly bound each together.

For personal experience I can state that changing our beliefs is a really slow process. It's like drop some colour in a point of a spider net. The color changes but the net has thousand of joints and it's hard to spread the change of color to all the joints.

There are techniques such as the EMDR for helping at spreading the thought restructuration from more and more thoughts.

Some one may state that Freud's sentence is lacking of a scientific evidence based demostration, but it doesn't mean that it's false. It only mean that it should be proved by other researches. And that it could be partially true and partially false.

However an intuitive proof of the validity of Freud theory could come by Warren Buffet.

Warren Buffett took the Dale Carnegie course "How to Win Friends and Influence People" when he was 20 years old, and to this day has the diploma in his office.4

I simply think that it's very intuitive that it's easier to be happier if we are winner and receive positive feedback by the society, and this can be learned as everything else. I believe that the available data on the effectiveness of cognitive & comportamental psychotherapy at solving anxiety, doc, anxious attack and depression proves this hypothesis very well.

Not the answer you're looking for? Browse other questions tagged depression or ask your own question.

5
What exactly is meant when it is said that only you can make yourself happy?

2
Does physical aerobic exercise ameliorate depression?
6
Is depression an inflammatory disease?
3
Can adhd and ocd coexist? Is it in the same way mania and depression can coexist (in bipolar disorder)?
1
Can CBT cure any kind of depression?
4
What effect can depression have on memory?
2
Do psychiatrists and researchers themselves don't have an idea how antidepressants work?