How to read a neuron tuning curve graph?

I'm working through the tutorial of section 2.4 of "How to Build a Brain" and I've encountered this graph of a neuron tuning curve. 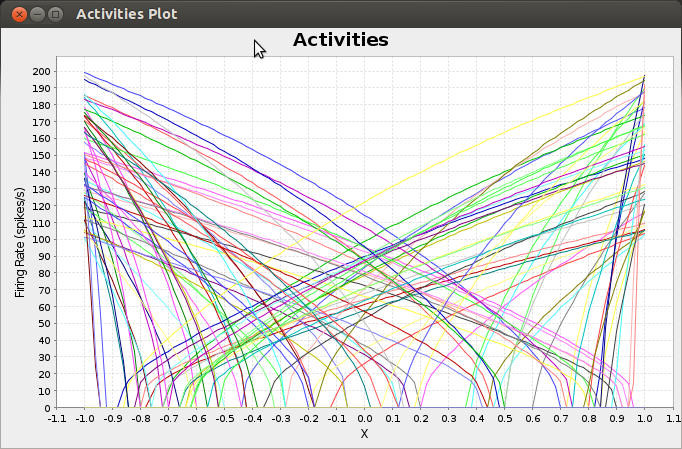 I understand the Y axis is the firing rate of the neuron, that each curve is the response of a single neuron (there are 100 neurons represented here) and that this plot shows a variety of "on" and "off" neurons, but what does the X axis represent? Is it the action potential input? Is X the value that the neuron represents by firing at that rate?

Please allow me to give some context around the tutorial. You first create a population of 100 neurons to represent an input that will vary from -1 to 1. You notice that this works well, but that the representation degrades when you exceed this range falls apart and you cannot represent anything the range past -2 to 2.

You then use a new population of neurons to build upon this newly acquired knowledge of how neurons can represent functions, to make them represent a 2-dimensional vector similar to the monkey-arm motor experiment performed by Georgopolous.

I could take the leap of faith here and just take for granted that neurons can represent functions and that the more neurons you have, the better approximation of the function you can get, but I feel like understanding these fundamental concepts are important.

I'm going to hazard a guess that these are neurons that are tuned to a particular direction in space and that the x-axis is the angle in multiples of π radians, particularly since these are related to the work of Georgopoulos and colleagues.

A typical population code involves neurons with a Gaussian tuning curve whose means vary linearly with the stimulus intensity, meaning that the neuron responds most strongly (in terms of spikes per second) to a stimulus near the mean.

So, as mentioned above, the independent variable here is the stimulus "intensity" (in this case abstracted by the quantity of direction) and the firing rate is the dependent variable, hence their positions on the axes in the plot.

For some of the more theoretical studies of this type of phenomenon, I would definitely check out the work of Emo Todorov, among many others, as well.

My answer is that you have the beginnings of a grasp of neuronal tuning.

Rather, neurons can represent functions, but in most cases they tend to represent something closer to propositions.

The seminal work of Georgopoulos et al. was about population encoding. Sure the neurons were cosine tuned, but certain neurons clearly represent certain movement positions more precisely than others. I prefer to think of the neuron as representing a belief that the animal is reaching in a particular direction. Here your "x" would be the angle of reaching.

This same intuition can be applied to V1 orientation tuning as discovered by Hubel and Wiesel. Here your "x" would be the orientation of light.

It's not to say that firing rate can't be used to represent a function. It's just more accurate, in my experience, to say that the neuron usually represents something more akin to its belief in the proposition that "I am reaching to the left" or "I am seeing a horizontal bar of light in the center of my field of vision."

Within the context of the tutorial referenced, this graph is showing the first principle of the NEF, which is that neurons approximate functions by encoding them with their firing rates. Here the input being represented it the range 1 to -1. What the graph shows is the firing rates of all the neurons given the value being represented. So say you have the value 0.5. The firing rates of all the neurons can be found by looking at their Y values at x=0.5.

For further information on encoding and decoding (how to get the information back out from a population of neurons), check out this NEF tutorial.

The model does not care what x is.

You first create a population of 100 neurons to represent an input that will vary from -1 to 1.

That input, which varies from -1 to 1, is x. For sensory neurons, the variable x would likely represent a transformation of some aspect of the sensory stimulus (e.g., the visual angle, sound level, or temperature), but it can be whatever you want it to be.

Not the answer you're looking for? Browse other questions tagged theoretical-neuroscience computational-modeling nef or ask your own question.

8
Spiking Neural Network Simulation: Measuring and Classifying Bump Attractor States
3
How well does the NEF capture neuronal heterogeneity?
3
How well are neurotransmitters used in SPA?
2
Benefits of using more complicated neuron models in NEF models
1
In NEURON simulator, how can I save the values of a graph to a file?
1
In NEURON simulator, how do you pan and zoom a plotted graph?
1
Understanding neuronal firing in the context of Spike Timing Dependent Plasticity
5
What sources of randomness does the brain use for sampling?
1
Is short-term memory theoretically possible to with spiking neurons?