How does the brain read rotated text?

Suppose a human ran across a letter written at a 45 degree angle. How does the brain read this text? 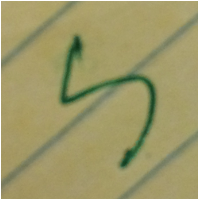 Most people don't often see text written at an angle, so it seems safe to assume that the brain has to do some extra work to recognize the text.

My guess is the following:

Well for one, the first neurons to decode this symbol are orientation neurons, in V1 of the primary visual cortex. So some neurons have enhanced firing for say a 45 degree angle, and neighboring neurons for a 46 degree angle, and so on. Higher up the processing stream groups of neurons respond to shapes, that are a conglomerate of the orientation lines. Then higher order visual cortices will process the seen image, as well as feeding back to the original orientation neurons, fine tuning their processing.

Here's an example though of something our brains can encode, albeit taking a bit longer because it is out of the ordinary to see it this way. When we see faces, there is an area in the temporal lobe called the fusiform face area (a higher order visual processing area) that becomes particularly active. In EEG recordings, there is a negative component of the event related potential (ERP), the N1. When viewing faces compared to other objects, this N1 component (at 100ms) becomes enhanced in amplitude (more negative) as well as latency. So it has been termed the N170, for occurring later in time at 170ms. When viewing INVERTED faces, this effect becomes even stronger. It has been hypothesized that this is due to the fact that we process faces in a holistic manner, so that when it is inverted, there is a 'lag' in processing speed to figure out this is a face. This has been attributed to a delay in the fusiform face area.

I realize this is not reading, but I think it touches on the concept you're asking about. Our brains are incredibly good at pattern recognition, at filling in the blanks, and decoding reality presented to us from our senses. So I would say yes, there would be a bit of 'extra' work in deciphering the text at an angle. And mind you, we see slanted text all the time, we don't always have our heads and eyes straight ahead! But also, it is strongly context dependent. If other digits or numbers were in combination with this image, we would either see a 5 or S, respectively. It would be a terrible evolutionary adaptation if we couldn't read or process images that were not ideal. A certain amount of interpretation or assumption goes in to perception. That's what is referred to as top-down processing.