Can brain hemisphere activity/ dominance be inferred from the test subject's drawings?

I'm aware that all tasks that a person undertakes involve both halves of the brain. At the same time, there are studies of people who have communication between brain halves severed or suppressed and they produce dramatically different drawings of the same object with different hands.

This makes me ask - is there some sort of a (non-FMRI) test that involves drawing or other activity and can:

I'm aware of this Ted talk: My stroke of insight, in which a neuroscientist describes the experience of having a stroke affect one half of her brain, dramatically altering her perception and ability to process real world information. For example she describes being unable to recognize digits in a phone number and "hunting" for the right digit by tracing its shape on the phone. 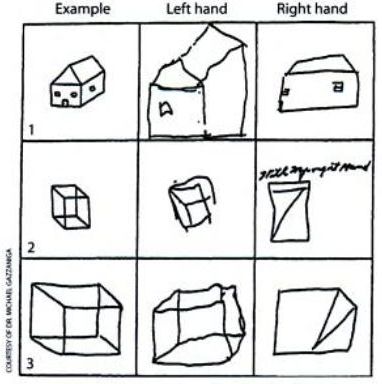 You say you are "aware that all tasks that a person undertakes involve both halves of the brain". Then, On what kind of patients would this hypothetical test be suitable as healthy people use both hemisphere and split brain use just one hemisphere depending on the drawing hand ?

If you refer to healthy patients I don't think such a test is possible. For the moment left-brain/right-brain dominance is usually considered as a neuromyth.For example:
- this blog article http://www.psychologytoday.com/blog/brain-myths/201206/why-the-left-brain-right-brain-myth-will-probably-never-die
- or this paper http://www.nature.com/nrn/journal/v7/n5/full/nrn1907.html .

Maybe some tests (drawing or whatever) would correlate a bit with partial and short term hemispheric activation with desirable inter-individual differences. But aiming for a test bringing more than that is in my humble opinion vain hopes, as hemispheric dominance on healthy subjects has weak (or no) scientific ground.

4
Split Brain Experiments on Animals
1
What would happen if we cut the corpus callosum?

5
Can the brain work better in stressful conditions?
1
Experiencing neuronal activity inside the body/brain
12
Do highly creative people dream more and/or differently than ordinary people?
8
Are the physical sensations of an emotion due to neural activity strictly in the brain or also in the body?
1
Jung's Anima and Neurological Basis in Split-Brain Patients; Left-Persona and Right-Anima
2
Has there been any research on the visual uniqueness (in terms of brain activity) of numerals from 0 to 9?