In what ways can neurons fire randomly?

When developing a model of a biologically-plausible neural network, it is important to know all the circumstances under which neurons can fire. But, I am limiting this question to random firing. In what ways, if any, can neurons fire randomly, i.e., without (or regardless of) presynaptic input?

Between 0 and 6 days of age, rat cortical neurons randomly fire at an average rate of once every 30 minutes. The rate decreases to 0 by age 12 days. Reference: here

In what ways can neurons fire randomly?

Answering the question in the manner that you are asking for would require quite an exhaustive list. However, a fundamental concept in all of this is having a "leak" channel.

NALCN is the only nonselective channel found in the 24-TM channel family and is equally permeable to Na+, K+, and Cs+. [1]

The majority of the ions transported by the channel are sodium. This slow influx will have the same effect on voltage over a longer period of time as would a rapid influx, a depolarization of the membrane.

NALCN is found in all animals studied, from humans to D. melanogaster, C. elegans, snails, sea urchins, and the placozoan Trichoplax adhaerens.

So, it is likely that this channel is conserved in the evolutionary ladder.

This addresses your other question, this leakage makes the membrane voltage more permissive to initiation of rhythmic discharge and other oscillatory behaviors.

As to whether anything fires "randomly", I would say that neurons can fire with a given distribution [3], but this is governed by all the different channels which operate and their conductances (inverse of resistance) rather than just by chance alone. Remember, if a neuron fires randomly, it's not likely to have much effect on a post-synaptic cell unless it's time-locked to a series of other action potentials arriving at the same spot.

Neurotransmitter-filled vesicles are released not only en masse when a neuron fires but also individually at random intervals. Nobel laureate Bernard Katz, who studied NMJs, observed:

In the absence of any form of stimulation, the end-plate region of the muscle fibre is not completely at rest, but displays electric activity in the form of discrete, randomly recurring miniature end-plate potentials.

For chemical synapses in general (not just NMJs), such potentials are known as miniature excitatory postsynaptic potentials.

First, you need to keep in mind that what one would consider "random" might not be "random" for another person. On one extreme, some scientists believe the brain is operating essentially deterministically (thermal/quantum noise is too small), that is, if you know the "precise" state of the brain and its environment, you can predict its future states for a very long time. Regardless of the truth of that statement, neural signals are effectively random due to our lack of knowledge.

Now, you specifically asked if a neuron can make random responses regardless of synaptic input. Yes, it can. 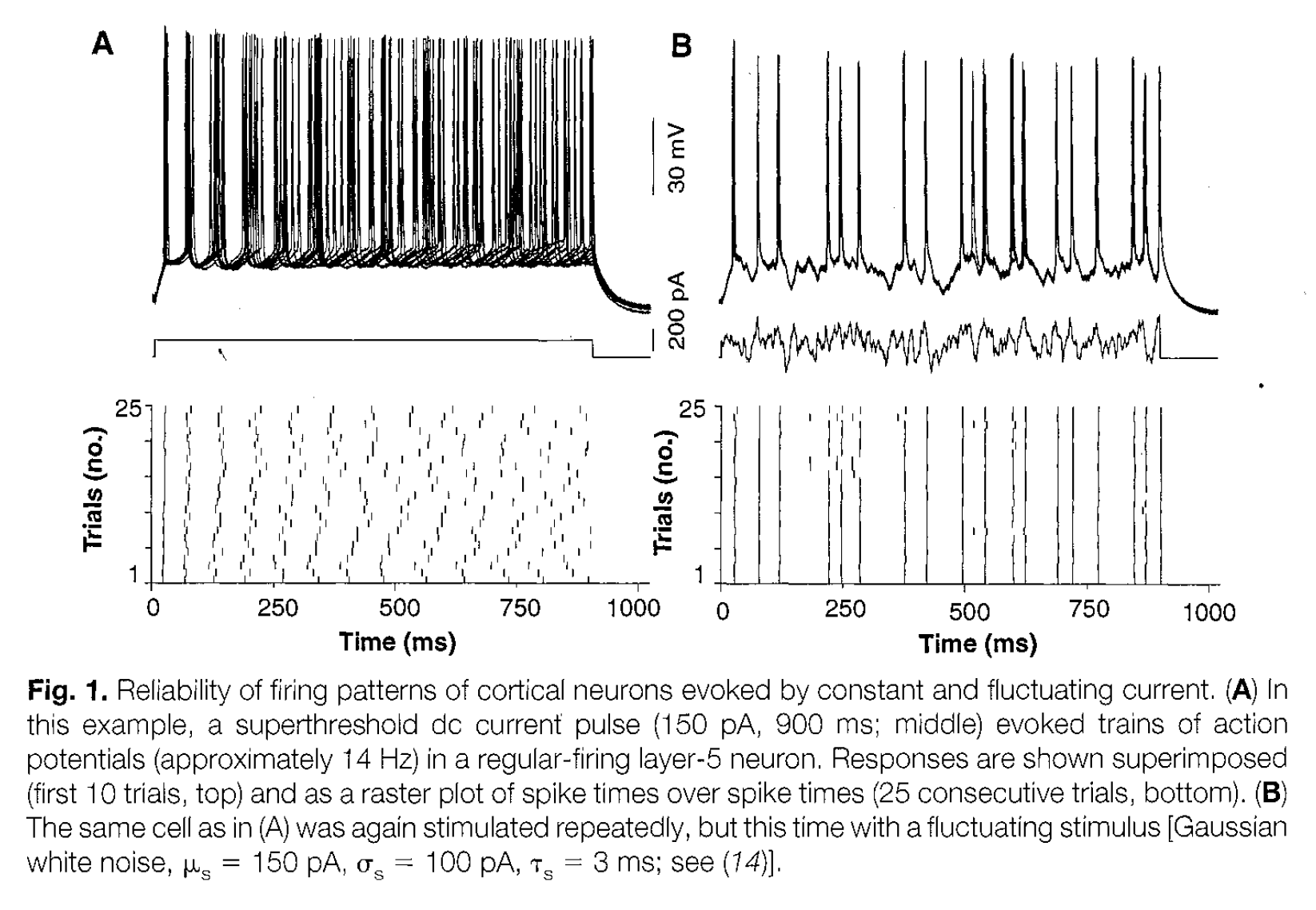 14
How does neural spiking begin in the fetus?
0
Free will and neuron firing

31
How are newly created neurons recruited into existing networks?
10
How can I test whether Dorsal Raphe Nucleus (DRN) activity at night is related to variations in mood?
2
How many action potentials from presynaptic neurons would be required to make a postsynaptic neuron fire?
5
Can dendrite spines fire action potential toward the soma?
2
During synchronized waves oscillation (alpha beta etc...) do neurons fire only once for each wave cycle?
2
Can a hyperpolarized neuron fire action potentials?
3
Can "fire together, wire together" be undone?
5
What role do circular network structures play in neural networks?
2
Is it true that stimulants make neurons fire more often, and depressants make them fire less often?
2
Can two neurons stimulate each other?