Why do people suddenly look back if you look at them for a while?

You possibly are familiar with the following situation, I do not know if this is a researched phenomena or not however.

You look straight at somebody for some time and suddenly, even though he or she does not consciously know that you are looking at him or her, he or she suddenly starts to look back at you.

I am wondering why and how this is happening?

How are people unconsciously recognizing other people looking at them and what makes them look back to them?

What you describe is an illusion.

(a) The human field of view is almost 180° when staring straight ahead and 270° with eyeball rotation (looking to the side without turning your head). If you look at someone from slightly behind and to the side, they will appear to be gazing forward, and you may feel unnoticed, but in fact you are within their field of view. 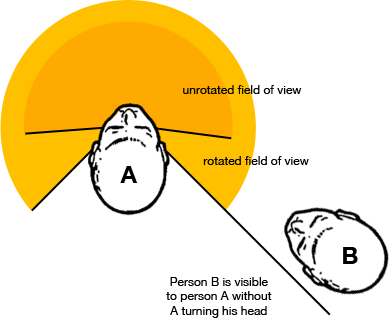 (b) The peripheral field of view is highly sensitive to motion. So if you turn your head towards someone while you are within their peripheral vision, their attention will automatically focus on this (danger! predator!) stimulus and they will turn their head to you. This is a reflex.

(c) On the bus or subway, if someone sits in your field of vision, they will have noticed you when you or they came in and therefore know you are there. If you both are in a public place, they might not have seen you arrive, but they will know that someone might have. Self-conscious people feel observed, and they continually check if someone watches them, who it is, and how they react. Now if you look in the general direction of a self-conscious person, and this person looks around like they do every few seconds, this movement will cause you to look at them in reflex, giving them the impression that you have been staring at them all along. If both of you stay in the same place for some time and they continually check on you, and their movement makes you look up almost every time, they will feel like you are watching them all the time, although you are focused on something else and only react to them looking at you.

Rather than discuss limits of the human field of view, or extrasensory perception (I don't know anything about the first, and the second is a myth), I think we can look at this as a simple case of illusory correlation (wikipedia), which is both a psychological phenomenon, and something psychologists need to overcome to investigate other phenomena.

In a nutshell, people aren't automatically good at thinking about when events co-occur, and have an inbuilt tendency to see things that happen together, like looking at someone, and having them look back, as being related, rather than random coincidence.

In your example, there are four possible incidents:

If somehow you could data all four occurrences above, you might run an experiment where you sit on a bus behind 5 other people, and look at each of them for 4 1-minute intervals each. Looking at 5 people 4 times each, there's 20 opportunities for them to look back at (first column), but there's also 4 times as many opportunities (80; second column) for one of the people you're not looking at to be looking at you. Let's also assume that during this experiment, you're looked back at on 10 of the trials (so not looked back at on the other 90).

If, however, you're right, and looking at people does cause them to look back, you should find a significantly greater proportion of people looking back when you look at them, and so a higher value in the top left cell here. The technique we use for finding out if the proportions are different to what you'd expect by chance is called the Pearson's chi-square test.

The problem, to repeat, is that people aren't good at intuitively figuring out these proportions, and tend to overemphasise those few cases where both events happen (you look, and they look back), without appreciating the other 3 cells in the table. And this, my friend, is why we run experiments.

Not the answer you're looking for? Browse other questions tagged cognitive-psychology social-psychology or ask your own question.

1
Why do we rely on others in dangerous situations?
2
What's the term for people who deny others' achievements?
6
Why do people try to make themselves feel better by treating others poorly?
3
What kind of cognitive psych journals are receptive to clinicians without any publications?
1
How come that someone understands an utterance only after a few moments?
8
Where are scientific references for the claims made in "Thinking Fast and Slow"