Is there a correlation or cause-effect relationship between attractiveness and feet?

My psychology professor is very hard to understand and can't speak English well. She was saying something about a study was done that found the best indicator of a physical attractiveness is feet, and that men preferred small feet and women prefer large feet. Does anyone know the study being referred to? I can sort of see what is being said, as perhaps women are attracted to tall men and there's a correlation between height and foot size. What confuses me is my prof was definitely saying something about "the best indicator" as if the most attractive part of a person is their feet. Can someone provide a reference to such a study?

This is a weird one! Looks like your professor's on to something. Holmes' (2010) New Scientist article, "Why men are attracted to women with small feet" gives an interesting intro based on Atkinson and Rowe (2010), which was a rather hard-to-track-down poster (not that I've retrieved the original). They produced facial composites of eight women each based on longest and shortest foot length, and other composites based on other measurements, and had men rate their attractiveness. Composites look something like: 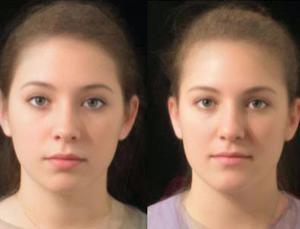 (source: newscientist.com) (Not sure which measurement was the criterion used for these two.)

As a dude myself, I guess I'd rank the left composite as more attractive, but opinions vary, and it's worth noting that both benefit from a basic effect of facial composites: they reduce asymmetries and increase normativity, which are attractiveness enhancements, speaking basically, objectively, and generally. In any case, hopefully this demonstrates the research method clearly enough.

Atkinson and Rowe found that about 7 out of 9 men preferred the composite formed from the faces (i.e., not displaying the feet!) of the eight women with the shortest feet over the composite of the eight with the longest feet. This isn't support for the "best indicator" status though. Composites based on thigh length demonstrated favor for women with long thighs in 8 out of 9 men, and 11 out of 12 men prefer a composite of narrow-hipped women! That one surprised me a bit. Better indicators out there, it seems. Holmes doesn't mention any results from Atkinson and Rowe regarding male foot length, but long torsos and small wrists seem more noteworthy, at least in terms of their relationships with attractive male faces.

For an original article on foot length and attractiveness, check out Voracek, Fisher, Rupp, Lucas, and Fessler (2007). There's quite a story to tell here, it seems to have everything you're looking for, and Fessler is hosting the article for free access, so I'll just hook you with an excerpt of the abstract:

Not the answer you're looking for? Browse other questions tagged social-psychology physical-attraction correlation or ask your own question.