What do we call the "middle" variables in a complex research model?

As this is rarely complex enough for theories in disciplines where humans are involved, there is also the option to create a multivariate model, where many independent variables will explain a dependent (or goal) variable. There, the terminology is still unambiguous.

But many models from recent publications are more complex than this. Consider this path model: 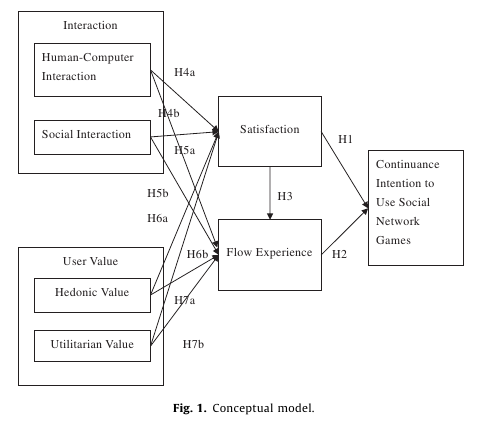 Continuance intention seems to be the goal variable, because it doesn't lead to any other variables. Interaction and User value are certainly independent variables in this model, because they don't depend on others. But what are Satisfaction and Flow experience? They depend on lots of other variables, but they are not our goal variable, because this model is about Continuance intention, not about Satisfaction or Flow experience.

So, what is the proper terminology for such variables stuck in the middle of a multi-level model?

I've always found it difficult to pack up real-world data into the neat boxes of methodology textbooks, but if you really need a label for these, I'd go with mediator variable.

From a famous article on these variables:

@Ana is correct. Satisfaction and Flow Experience are mediator variables in this path analytic model linking Interaction and User Value to Continuance Intention to Use Social Network Games. I don't see any indication that this is a multilevel model; I think you might be mistaken about that, or at least might be excluding any information that would make this relevant. There could be a second level fit to Interaction and User Value directly rather than to the two variables contained in each of those boxes, but I don't see any paths leading from those outer boxes, so I assume there is no second level...and again, "mediator variables" would still work as the term you probably want. In this model, the middle variables completely mediate the relationship of the leftmost variables to the rightmost, but Flow Experience only partially mediates the relationship of Satisfaction to the rightmost, because Satisfaction also has a direct pathway depicted. The coefficient of this pathway indicates any independent relationship those two variables have when controlling Flow Experience.

Another distinction can be made between the variables on the left with no inbound arrows and all others that do have inbound arrows: they are "exogenous" and "endogenous", respectively. That is, even though the mediator variables have both inbound and outbound arrows, they are endogenous. Only the leftmost four variables in this path diagram are exogenous. Exogenous variables are strictly independent, but only the rightmost variable is strictly dependent. All endogenous variables are at least dependent on some other variables, but in this path model, Satisfaction and Flow Experience may be treated as independent variables when estimating their paths to the final outcome variable on the right. They have dual status as in/dependent variables in this model, at least if it is estimated piece-by-piece. It might be misleading to call the mediator variables independent if the whole model is fit simultaneously via SEM.

To repeat what's been said, @Ana's answer is correct, to a point. I think a more powerful way to look the kind of data you're talking about is using structural equation modelling. In SEM terminology, your middle variables could either be manifest (if you're measuring them directly), or latent (if they're inferred from other variables). The terminology is explained quite well here.

It definitely does not have anything to do with neural networks, although they could at a stretch be used to model the same phenomenon.

Edit: I meant to also say that the language and analysis framework you use is often dependent on the specific field you're coming from. Mediation and moderation analyses are most common in social psychology, but to the best of my knowledge unheard of in cognitive psychology. SEM is more common in psychometrics, and for researchers looking at things like anxiety and OCD (I can't reference this, as I'm mostly going by who I know in my own university).

Not the answer you're looking for? Browse other questions tagged terminology model or ask your own question.

5
Is there a psychological model or theory that describes strangers in the vicinity unknowingly causing discomfort?
10
What are the characteristics that make complex problem solving complex?
4
How do you call a study in which subjects were deceived about the real purpose?
6
Model for the Un/Conscious Mind
5
What do you call sensations without stimuli?
1
Is The Chimp Model really a thing?
0
Is there a name for the natural human guilt complex?
3
What is the name of this bias or phenomenon?