What is an effective way of working with core beliefs/schemas?

In CBT one of the core concepts is ANTs (automatic negative thoughts) that form the basis of depressive feelings: they are repetitive, conscious, mostly ungrounded negative thoughts about one's existence, talents, capabilities, etc. Most applied CBT literature discusses how to get rid of these thoughts and replace them with more realistic or at least more positive ones.

ANTs don't exist by themselves though; they derive from core beliefs or schemas that are quite elusive and often unconscious (unlike ANTs). Currently I've read the following books on the subject: Schema Therapy by Young et al., Schema Therapy: Distinctive Features by Eshkol et al., and a few articles, which helped me identify some of them.

Is there any good literature on working with ANTs? I'm especially interested in cases when ANTs are not particularly evident, so it's quite hard to identify them. It's almost like it's subconsciousness, but of course it is not.

I'm lucky enough to know a counselor-in-training whose preferred modality is CBT; here's what she suggested.

Identifying those core beliefs is indeed the important part. Useful tools include the CBT Thought Record worksheet, which pretty well explains itself, and the downward arrow technique illustrated in this figure: 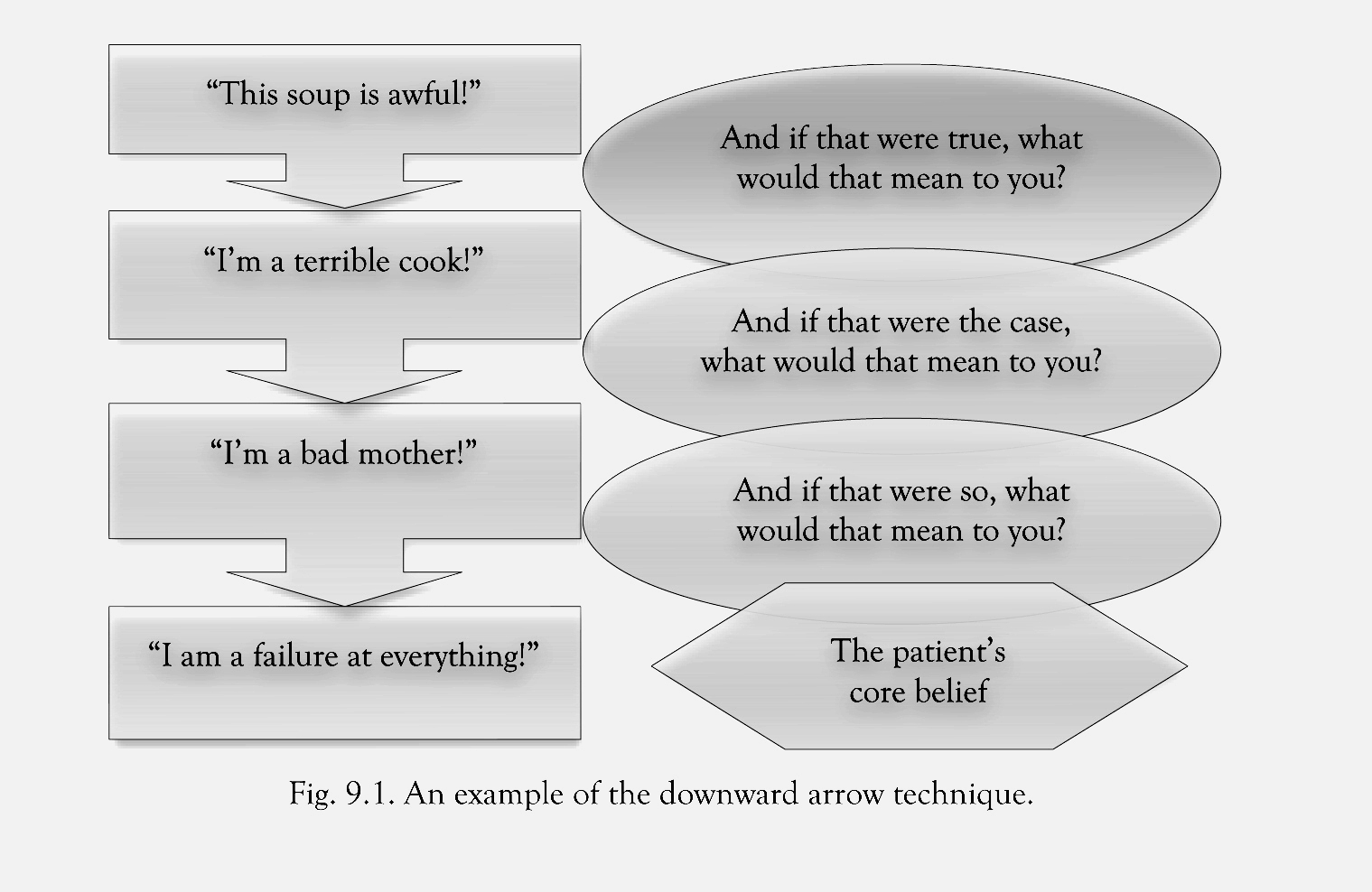 One less-than-self-evident trick in applying these methods is refusing to take "I don't know" for an answer – it's a cop-out, my counselor connection says! Assuming this works well enough, and that you can get to the core belief more or less, you can then check a list like Grohol's (2009) for help in identifying the particular cognitive distortion at hand. He also lists Beck (1976) and Burns (1980) as references on these theories. The work of Aaron T. Beck covers very many angles of CBT, and so would be good to study for further details. As Wikipedia says, "He is regarded as the father of cognitive therapy," so you probably can't go wrong with anything he's written.

Bringing these core beliefs to the conscious "surface" is a very good start. ANTs have a lot more power when they're preconscious (not "subconscious", BTW; see https://cogsci.stackexchange.com/q/992/4086), because at this level, they have plenty of emotional impact but receive little or no rational scrutiny. When a person actually states a core belief aloud, that belief might not sound so reasonable, because the believer has to process the belief more deeply and consciously, which engages the error-checking cognitive mechanisms that an unconscious belief does not.

Sometimes hearing oneself speak the belief aloud is enough to realize that it doesn't make sense, and to start catching oneself in the act of reacting emotionally to unreasonable ANTs. Further therapy is necessary sometimes, and often more can help. For instance, the first question a therapist might ask in response to the core belief in the above figure could be, "I hear you expressing a very broad belief about yourself: you don't seem to think you have ever succeeded at anything. Am I understanding you correctly?" That's a very gentle response style based on reflective listening; do you see how it does more than simply repeat the client's words back to him/her? If someone can say, "I am a failure at everything!" with a straight face, hopefully he/she at least can't say, "Yes, it's correct that I've never succeeded at anything." I don't think that's true of anyone.

If the client still can't see this, the therapist may have to up the ante a bit. One generally has to stop short of calling one's client a deluded fool, but various modalities take differing perspectives on confrontationality in talk therapy. Other usual precautions in counseling apply, but within the boundaries of accepted practice, whether differences in therapeutic style produce different outcomes is an open, empirical question, and will depend largely on the character of the client in question. Further detail is probably beyond the scope of this answer.

Not the answer you're looking for? Browse other questions tagged cognitive-psychology emotion unconscious automaticity or ask your own question.

4
What are the most effective psychological techniques for unlearning information
2
What is the most effective treatment for ADD and ADHD that excludes chemical prescriptions from a doctor?
1
What is a effective and interactive exercise to demonstrate cognition to a class
2
What is the bias that arises because a thing is way more common than the rest?
7
What psychological methods exist for dealing with uncertainty?