Neuroplasticity and Treatment of Depression

After reading 'The Brain That Changes Itself' by Norman Doidge, 'The Mind and The Brain' by Jeffrey Schwartz and a few other books, I've become curious about the science of neuroplasticity, which, as I understand, is a new paradigm in neurophysiology that replaced the older doctrine of brain immutability.

There's a wealth of empirical evidence in studies conducted by Bach-y-Rita, Taub, and Merzenich that confirms that brain remains plastic for pretty much the whole life, after a period of hyperplasticity in childhood.

This seems to be a powerful tool that can contribute to treatment of various disorders, such as depression and anxiety, especially in cases when the condition is resistant to medication. I'd like to know if this idea has been applied with some success, and if anyone developed a specific neuroplasticity-based approach.

It may interest you to know that depression and anxiety relate to emotional stability (essentially the opposite of neuroticism), a personality trait which tends to decrease over the lifespan, especially in young adulthood (Roberts & Mroczek, 2008). Here's a figure depicting this trend (bottom left): This article points out that most of the personality changes depicted above occur during young adulthood. This supports the hypothesis that plasticity is an important enabling factor in these changes. Roberts and Mroczek also describe these changes as mostly positive, which supports the hypothesis that these changes are a partly intentional process of social adjustment. I'm not aware of any evidence that supports these hypotheses more directly, but any such evidence would also support the plausibility of interventions that target neuroticism during earlier life stages when plasticity is generally greater.

The language of plasticity appears sparsely in a similar article that describes change in adult personality (Srivastava, John, Gosling, & Potter, 2003), though no explicit references to neural plasticity appear. However, this article also presents a complication and a challenge through its own evidence of change in neuroticism over the lifespan, depicted in this figure (top left; neuroticism $\approx (-1)\cdot$ emotional stability): 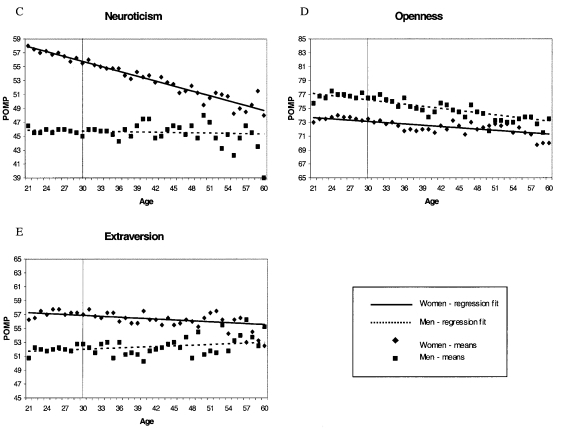 The complication is the sex difference in change over time: only women's neuroticism seems to decrease in this study's evidence. The challenge is the apparent linearity of both trends; neither supports the importance of plasticity. Therefore it's not clear that any intervention focused on altering neuroticism would function equally well for both sexes, nor take advantage of neuroplasticity. Nonetheless, a very recent article recognized the malleability of neuroticism and recommended exploration of options that would intervene at this basic trait level of disorder development (Barlow, Sauer-Zavala, Carl, Bullis, & Ellard, 2013, in press). Thus it seems further evidence to support your idea may be forthcoming!

Neuroticism aside, other recent articles have promoted biofeedback, neural decoding, and neural interface technology as ways of "targeting", "promoting", and "exploiting" neuroplasticity in treating neurological dysfunction (Wang et al., 2010; Seitz, 2013; incidentally, Seitz works at my alma mater and published this shortly after I graduated...it's a small world). Biofeedback and neurofeedback have established applications in the treatment of depression and anxiety (see for review Yucha & Montgomery, 2008). Biofeedback methods seem to have been around just about as long as theories of neuroplasticity (discounting one particularly early study at the end of the 18th century), so I wouldn't say biofeedback was intended as a neuroplasticity-based approach, but evidently it has turned out to be a somewhat inadvertent application of neuroplasticity. Clearly, theorists and clinicians are actively capitalizing on this convenient convergence of neurology and clinical methodology – this trend seems likely to continue.

Not the answer you're looking for? Browse other questions tagged neuroscience cognitive-neuroscience depression or ask your own question.

34
How valid is Lumosity's Brain Performance Index and what normative information is available?
18
Can we change our personalities?
5
How are personality traits "encoded" in the brain?